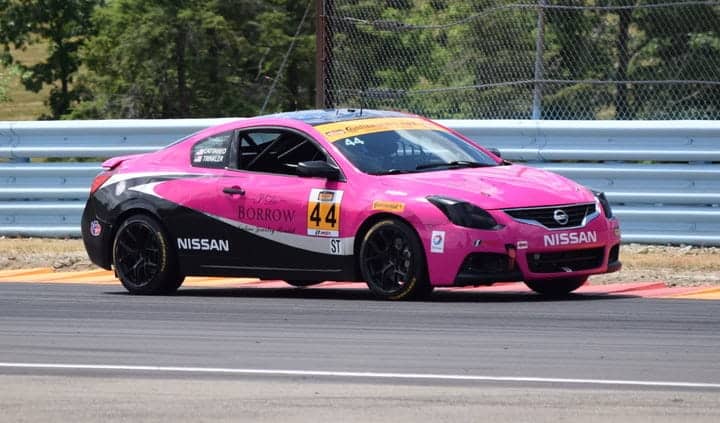 You might be wondering why we’re not leading with a picture of the Grand Sport winners?  Quite simple, the Grand Sport class was not where the action was in Saturday’s IMSA Continental Tire SportsCar Challenge race at Canadian Tire Motorsports Park.

A mere four cars were entered in the Grand Sport class, and from the start, Multimatic Motorsports dominated.  Scott Maxwell won the pole in the No. 15 Ford Shelby GT350R-C and drove off to a comfortable early on.  Meanwhile Compass360 Racing‘s Paul Holton in a similar Ford and CJ Wilson Racing‘s Danny Burkett (with his lumberjack fire suit) in a Porsche Cayman GT4 Clubsport battled for second.

Bodymotion Racing, who had won the last three races coming into CTMP, struggled from the start.  Cameron Cassels quickly fell off the pace and was not a factor for much of the race.  Cassels pitted and handed off to Trent Hindman 45 minutes in, but lost a lap in doing so.  A couple of penalties more or less kept Hindman from being able to contend.

Meanwhile, Murillo Racing‘s Tim Probert spun in his own oil in Moss Corner and collected Holton.  This allowed Burkett to get past for second while Probert was forced to retire from the race.  Later on, Burkett nearly got wrecked by the lapped ST-class No. 74 Audi S3 driven by Jim McGuire exiting the final turn.  By this point, Maxwell had a 12 second lead over Burkett and Holton.

Shortly after the first round of pit stops, the only full course caution of the race flew when Next Level European‘s Ari Balogh locked up the No. 83 Porsche Cayman coming towards Moss Corner and beached it in a sand trap.  For GS teams, this closed up the pack.  Multimatic’s Billy Johnson had a number of lapped cars between himself and Compass360 Racing’s Pierre Kleinubing for the restart.  That included Hindman, who was on his tail to pressure the No. 15 so that he could get back on the lead lap.

Hindman was able to eventually get back onto the lead lap on merit, but a bad pit stop and a second penalty put him way back. Johnson had a big lead over CJ Wilson Racing’s Marc Miller prior to the final round of stops. On those final stops, the two Fords took left side tires only while Miller took four tires.  The move dropped Miller to third.  Johnson ended up with a 17 second lead after the stops.

Meanwhile, Johnson went unchallenged to the finish on the way to take Multimatic Motorsports’ second win of the season.  Miller was able to take advantage of Kleinubing sliding out of turn 9 to take second with 14 minutes to go and hold onto it for the rest of the race.  The duo of Kleinubing and Holton were third.

The excitement on the day was definitely in the Street Tuner class.  Bimmerworld‘s James Clay started from pole, but quickly lost his lead to Freedom Autosport‘s Chad McCumbee.  Shortly afterwards, Honda of America Racing Team‘s Kevin Boehm took the No. 92 Honda Civic Si to the class.  Teammate Chad Gilsinger in the No. 93 followed past, then took the lead from Boehm.

MINI JCW USA was right up there in the hunt with two of their cars.  James Vance, driving the No. 37 this week instead of the No. 52, charged up through the order with Derek Jones close in tow in the No. 73.  By the midpoint of the race, Vance had dispatched Boehm for second, while Jones was fourth.

Meanwhile, the No. 44 CRG-I Do Borrow Nissan Altima did not participate in qualifying for the second week in a row.  Last week, it was because they have three races in four weeks (CTMP is No. 2 of 3) and didn’t want to risk it in the rain, but they had some gremlins on Friday that kept them off the track during the session.  Regardless, Sarah Cattaneo started in the rear of the field and methodically worked her way towards the front.  It did not take long for Cattaneo to enter the top 15, and then the top 10.

The sole full course yellow of the race came at an inopportune time for Honda of America Racing Team.  It came within laps of their sole scheduled pit stop, but the team only had one crew on-site.  As a result, they had to stack the cars in the pits.  As Gilsinger had taken the lead prior to the stops, the No. 93 got priority.  As a result, Gilsinger’s teammate, Ryan Eversley, was able to get out of the pits and maintain the lead.  Boehm’s co-driver, Trans-Am Series regular Cameron Lawrence was forced to wait and lose track position. Lawrence would have to charge in order to finish seventh.

The second half of the race saw Eversley having to deal with a big pack of ST competitors.  Good pit work put the No. 56 Porsche Cayman of Eric Foss in second, followed by Rennsport One‘s Dillon MacHavern, MINI’s Ethan Low in the No. 37 and Owen Trinkler in the No. 44, courtesy of a great pit stop from the CRG-I Do Borrow team’s revamped pit crew.

Behind that group was the No. 17 Porsche Cayman of Spencer Pumpelly, who clearly had a lot of pace.  Coming off of victory in Watkins Glen last weekend, Pumpelly was on the charge and managed to insert himself into the discussion after a while.

At the front, Trinkler was able to quickly make his way up to third and join the four-car breakaway along with Eversley, Foss and Low.  However, Low eventually fell off from the pack.  Later on, he slid off-course at Moss Corner and hit the tire barriers.  Low’s car was able to continue and no full course caution was thrown as a result of the incident.  However, the track saw heavy rains on Friday night, allowing water to build up in the tires.  That water ran out from under the tires and onto the racing surface.  This caused problems later on.

Eversley continued to lead until the rear tires (unchanged during their one stop) started to go away.  That allowed Foss and Trinkler to close things up, with Pumpelly in pursuit.  It was here that Pumpelly made his move.  After Trinkler failed to clear Foss at the end of the Mario Andretti Straightaway, Pumpelly pounced and moved up to third.  Less than a lap later, he took second from Foss and Trinkler was able to follow past.

At that point, Pumpelly put immediate pressure on Eversley for the lead. Coming into Moss Corner, Eversley ended up going wide and getting into the water that had run out from under the tire barrier. That allowed Pumpelly to take the lead with eight minutes to go.  Trinkler followed past into second.

Trinkler was not done here either.  Trinkler used his V6 Nissan power to run Pumpelly down and eventually forced Pumpelly into a mistake.  With three minutes to go, Pumpelly got a little out of shape in Moss Corner, allowing Trinkler to take the class lead.  From there, Trinkler held off the pack to take the second win of the year for CRG-I Do Borrow (the other was Sebring with their older Honda Civic Si).

Afterwards, Trinkler and Cattaneo were overjoyed with their run.

“It’s amazing.  It’s a dream come true,” Cattaneo said to IMSA Radio’s Shea Adam in Victory Lane.  “Every time we’re on the podium, you can’t even comprehend [the effort].  To win twice in one season is truly incredible.”

“It was good, clean racing,” Trinkler said after the race.  “I’m not sure what happened down into [Moss Corner], but I was able to get down inside of [Pumpelly].  We barely had enough left.  I was really bad in 5b (exit of Moss Corner) and the rest of the slow stuff, but the fast stuff, we were pretty equal.  I was hanging it out there in turn 8 sideways the last two laps.  We were driving the wheels off this Nissan Altima.  Gotta thank Sarah [Cattaneo]; she drove a great stint as well.”

TV coverage of this race can be seen Jul. 17 at Noon on FOX Sports 1.  It will be cut down so that the race can be shown in a two-hour timeslot.

The IMSA Continental Tire SportsCar Challenge teams will now take a week off.  The next race will be at Lime Rock Park on Jul. 23 at 10 a.m.  Live coverage will be streamed at imsa.com.  TV coverage will air on Jul. 31 at Noon on FOX Sports 1.