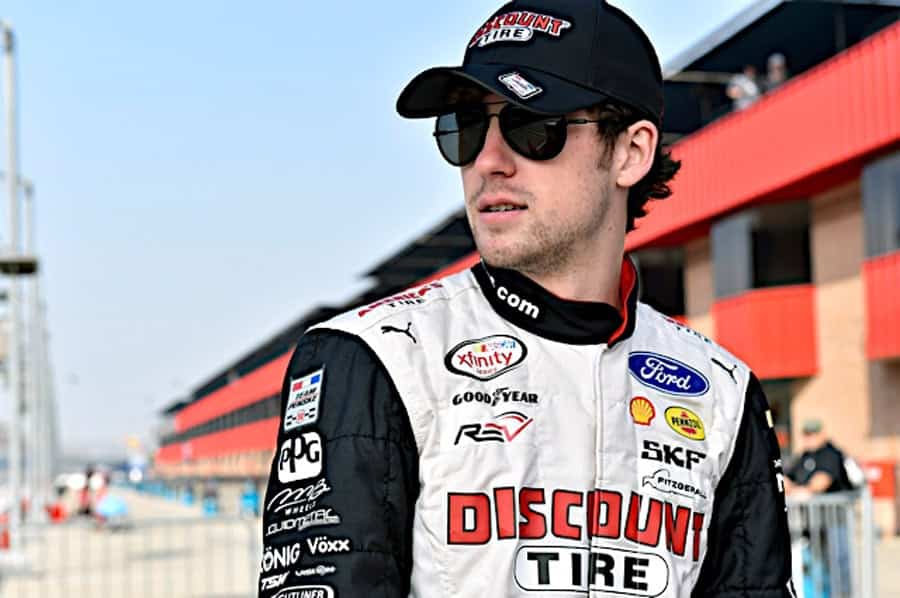 For the first time in weeks, it finally looked like one of Team Penske’s stars had a shot at a NASCAR XFINITY Series victory at Kentucky Speedway.

Driving in one of the rare starts for Penske’s No. 12 Ford, Ryan Blaney qualified sixth for the night’s ALSCO 300. Early on, the Sprint Cup Series rookie didn’t appear to be a contender, falling to ninth on lap 30 as Kyle Busch, Erik Jones and Austin Dillon drove off up front.

However, over the course of the 200-lap race, Blaney methodically worked himself into contention.

With a strong car on long runs, Blaney closed the gap to the leaders over the caution-free middle section of the race. By lap 60, Blaney was up to fourth. When the race hit halfway, the former Kentucky Speedway winner had risen to third.

Blaney ultimately caught the two leaders just past the halfway point, but that’s when he uttered a word infamous among NASCAR fans.

Blaney stayed in contention for the ensuing 100 laps, but was unable to make his way to the lead. Worse yet, a bold three-wide move under Jones failed on the penultimate restart, and Blaney was shuffled back even further in the mayhem of the final restart during Overtime. The North Carolina native would ultimately be relegated to an eighth-place showing.

“The track was interesting to say the least,” Blaney said to Frontstretch. “Really the only moves or positions you could gain were on restarts. We made a couple moves to try to win the race and we got run clear down on the apron to the corner by (Erik Jones) which wasn’t cool, then the next restart we got pushed four-wide and beat all around.

“That was unfortunate, but we had a good car. It just sucks that we didn’t end up where we should’ve.”

The resounding story coming out of Friday’s NXS race will be Busch’s dominance, but Blaney believed that with track position he could’ve held his own with the defending Sprint Cup Series champion.

“(Busch) just had track position all night,” Blaney said. “There were moments in the race where we were better and faster, but it was just impossible to pass anybody. If we could’ve gotten track position, I thought we could’ve had a good enough shot to win the race, just like the (No.) 18.”

“We just didn’t have enough speed to get the cars better than everyone else,” Keselowski said. “Once we got settled out we were probably good enough to run right behind them speed on the race-track wise, but we just had nothing on restarts and got passed by everybody down the straightaway through the gears.”

With the loss, the once dominant Team Penske’s NXS winless streak stretches to 18 races, dating back to the Keselowski’s win in the Nov. 7 O’Reilly Auto Parts Challenge at Texas Motor Speedway. The lone victory for Ford through the halfway point of the 2016 NXS season was Aric Almirola’s surprise triumph for Biagi-Denbeste Racing in Daytona.

With their struggles continuing into the season’s second half, the thoughts of both Ford and Penske can best be summed up with the last of Keselowski’s comments after Friday’s race: “We’ve got to be better.”