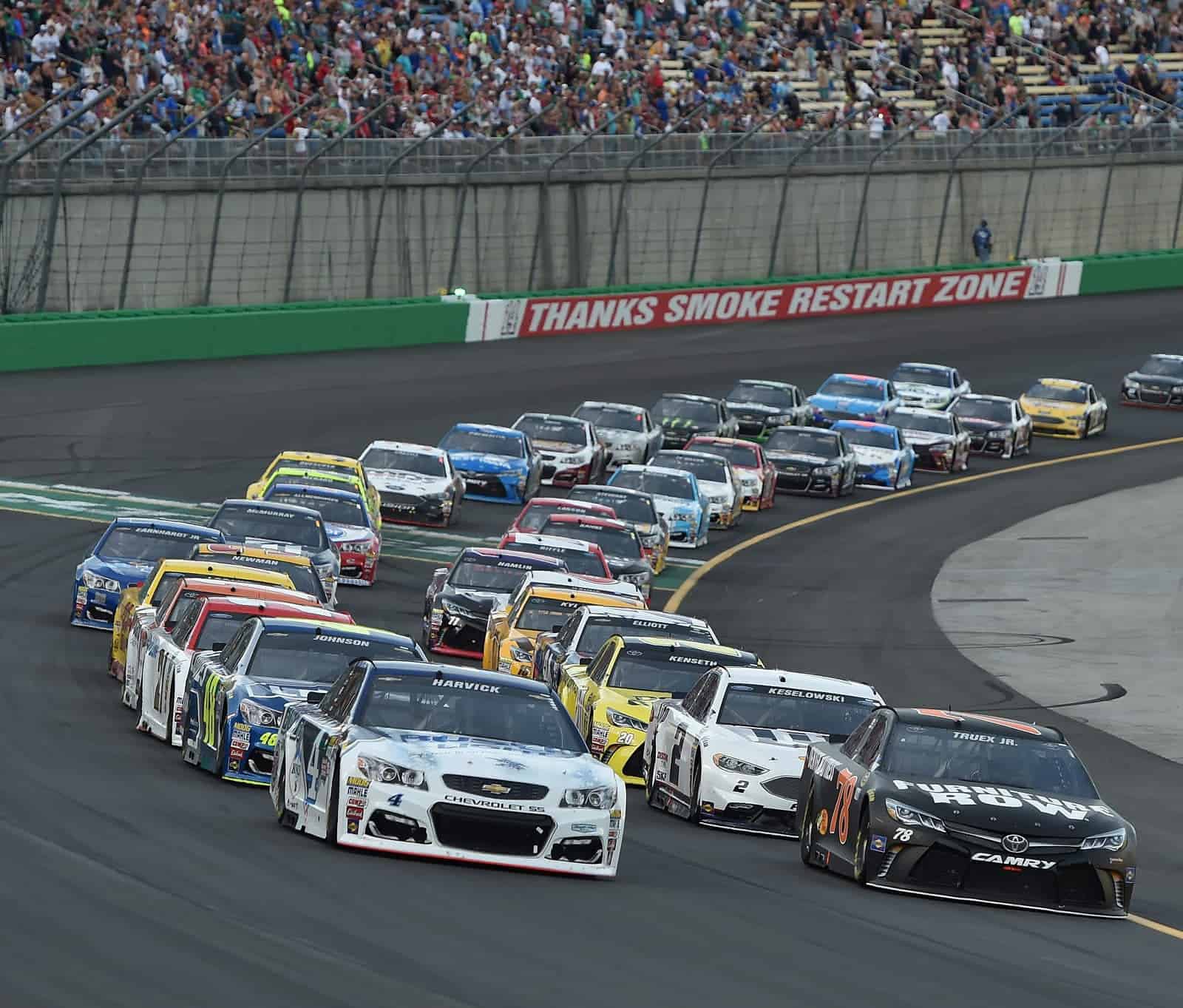 Opinions were split amongst the NASCAR Sprint Cup Series paddock after a difficult Quaker State 400 at Kentucky Speedway.

With myriad changes compared to last season’s race in Sparta, Kentucky, Saturday’s 400-mile war of attrition was impossible to predict.

A newly-repaved 1.5-mile surface saw the formerly bumpy track turn smooth, while retaining a few the characteristic bumps courtesy of coarse asphalt and a new tire dragon system that added rubber to the track to try to accelerate the aging process. At the same time, alterations to the track saw turns 1 and 2 become fast and easy to maneuver, while a flat turn 3 transitioning to the banked turn 4 offered a challenge that some of the sport’s best failed to conquer.

Following a June 13-14 test at the track, in which teams experience a plethora of tire scares, Goodyear opted to bring its hardest compound tire to the track, a conservative choice that nonetheless altered the racing as left-side tire wear became borderline non-existent, prompting teams to make two-tire stops for much of the race. Meanwhile, the right-side tires suffered from blistering as heat struggled to escape the harder tires, leading to multiple visits into the outside wall for some of the series’ best.

As if the above changes weren’t enough, NASCAR elected to make Kentucky its second test race for a new, “lower, lower” downforce package previously seen at Michigan International Speedway. With downforce levels lower than seen in recent years, the field was forced to combat ill-handling cars as they bit and clawed in a race decided by track-position and attrition.

With so many changes to combat, the Cup field struggled with setups on the track. From Jimmie Johnson to Joey Logano, multiple drivers saw their nights end early after a trip into the outside wall. In all, 10 cars made their way to the garage in the race’s opening 100 laps, nine of which were due to crashes.

Following the grueling 400 miles, drivers attempted to put to words their thoughts on the race that was. Opinions differed, though the overall theme proved to be confusion and frustration with a touch of optimism.

Naturally, the most optimistic drivers in the paddock we the ones that finished toward the front of the pack.

“Any time you have a repave, the track gets a lot narrower. I think we saw that tonight,” race-winner Brad Keselowski said. “Tonight was one of those nights where I think everybody is challenged to define what great racing is. I would probably say that Kentucky last year was an incredible race. It would be tough to beat that ever on a  mile-and-a-half racetrack.

“But I would also say that the cars are – the new rules package makes them harder to drive and requires a lot more precision as a race car driver, and I can appreciate that about the race. We’re still facing and fighting the same dilemmas in our sport of the lead car having a significant advantage over other cars in the field, but that advantage seemed to go from maybe on a 1 to 10 scale, from an 8 to a 6 or 7 here, which I think is good. But until the track widens out and gets multiple grooves, I honestly think this is the best race you’re going to see on a repave.”

“It won me the race,” Keselowski said. “Without the lower, lower downforce package today, I don’t think I would have won the race. I would have never made the move I made on (Kevin Harvick), and that would have been it.”

Third-place finisher Ryan Newman noted that a different strategy while repaving the track could have lent itself to better racing.

“If it was me, it would have been done better, but I think if you took the tire machine and just focused on the middle to upper groove and let the race cars work on the bottom groove, it would have helped,” Newman said.

The Richard Childress Racing also offered kudos to Goodyear for their decision to change tires after the test, saying, “As much as we hate that coming to a tire test as a group, as organizations, to change a tire after the test, it looks like it was the right call.”

After difficult nights that ended in fifth and 13th-place finishes, respectively, Tony Stewart and Dale Earnhardt, Jr., focused on the tires, criticizing the racing and inability to pass.

“As long as you weren’t around anybody, it was great,” Stewart quipped. “It’s hard any time you repave a track, and it’s easy for us to blame Goodyear. But they kind of panicked when they did the test here and got blisters, so they brought the hardest thing they had. None of us want to be like it was here, but just like every other new track, the more it ages, the better it’ll get.”

““Not fun. One groove. Slick, slick, slick,” said Earnhardt. “Personally, I believe they can make that right-side tire as hard as they want, go as safe as you want there so we don’t have the blistering, but soften the left up some. The racing will be better.”

Earnhardt also commented on the lower downforce, noting the difficulty it provided back in the pack.

“The low downforce… I don’t know if all of that stuff is a great combination,” Earnhardt said. “The drivers want less downforce. If you take me to Texas with the tire we got there and a wore out old race track and a softer tire, or the tire that gets grip into the track, I’d probably love this type of package, but it’s just a bad combination for the new surface and how conservative that tire is.

“You couldn’t hustle the car at all. You were just on pins and needles all the time like ‘Ugh, I don’t want to lose any ground’, and, ‘Boy, if I have a big slip, I’m going to lose all kinds of track position,’ which happened to a whole bunch of guys, myself included.”

“That sucks to race that way,” Earnhardt continued. “You want to drive and hustle, try to get in there and beat guys, and we can’t even run side-by-side. Guys running side by side were a second slower. What the hell? That’s awful. Got a problem man, that’s no good.”

Following the race, Scott Miller, NASCAR Senior VP of Competition, acknowledged that gaining data from the race would be more difficult than other races.

“Certainly it’s a little bit more gray than if it was at a place that we had a lot of races and some consistent races over the years on the surface,” Miller said. “But I think that still we can look at kind of what Brad (Keselowski) said… Certainly I think that the downforce package that we got, no matter where we’re racing, is going to provide that.”

For fans and teams lost after Kentucky, there’s good news. The Sprint Cup Series will return to a normal tire, normal rules package and a surface they’ve raced on before next weekend at New Hampshire Motor Speedway.