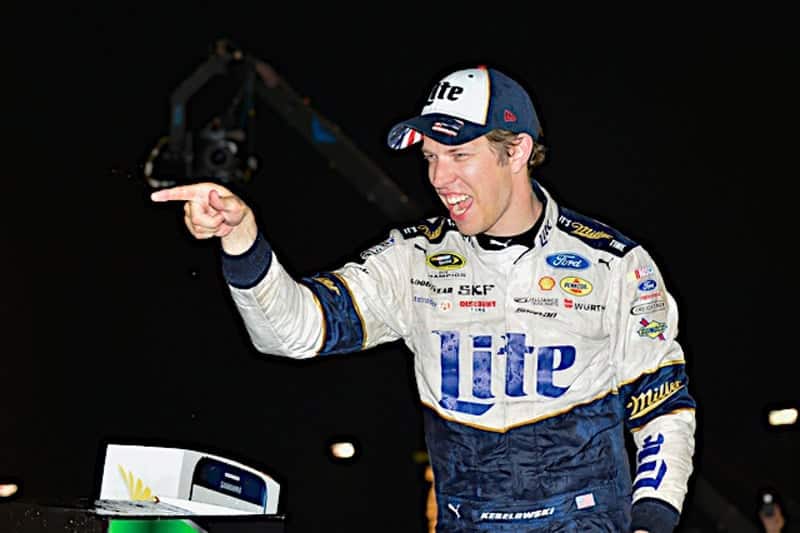 Who’s in the headline – With ‘Commander’ Kerry Tharp working his final race before leaving NASCAR to become Darlington Speedway’s track president, Brad Keselowski asked him during a Friday press conference if it would be their last together. Tharp’s reply?

“Thats up to you. Win the race and you’ll get another one.”

Keselowski did just that, stretching fuel for a third Kentucky victory while the field behind him grumbled about tires, repaves, low downforce and every other buzzword in recent NASCAR history.

What happened – Kevin Harvick and Keselowski led the field to the green flag after the field was set by owner’s points following heavy rain on Friday. Running on a repaved track with a harder compound tire then seen on non-restrictor plate ovals this season, track position became one of the major factors of the day.

One of the other factors proved to be early attrition. With fast turns 1 and 2 leading to a flat turn 3 and banked turn 4, the field was given a challenge they hadn’t previously seen, and a bunch of drivers failed to live up to the challenge. Ten drivers found themselves behind the wall in the race’s first 100 laps, including Jimmie Johnson, Joey Logano and Ricky Stenhouse, Jr.. Turns 3 and 4 proved to be the problem area, spawning seven of the race’s 11 cautions.

Martin Truex, Jr. jumped into the battle for the lead with Keselowski and Harvick as the race continued on., and on the penultimate round of pit stops the Coca-Cola 600 winner’s Furniture Row Racing crew appeared to get him into the lead. However, Truex lost it all to a penalty for passing on the left lane in pit road.

That set up Keselowski, Harvick and Matt Kenseth for the race’s final stretch as Truex drove through the field. Ultimately, it would be Keselowski taking the win, but in different fashion as expected as a 68-lap green flag run to close the race turned the war of attrition into a fuel-mileage race. Kez seemed to run out with two laps left, but got his car to keep going and held off a charging Carl Edwards for the victory.

Why you should care – Keselowski’s third win in six years at Kentucky gave the 2012 champ four wins on the season, the most of anyone in the Sprint Cup Series. While a lot of the hype throughout the season has been placed on Toyota’s top drivers, Harvick and Kurt Busch, it’s Keselowski that’s marching toward the Chase with the most wins and momentum. Saturday was also the second planned test for the low-low downforce package, and though it was hard to tell what effect it had with all of the other variables during the race, it’ll be interesting to see what NASCAR thought of the package, and if they’ll try to run it again before the Chase.

What your friends are talking about – While everyone and their brother – or rookie of the year rival in the case of Ryan Blaney and Chase Elliott – was crashing during the first half of the race, all eyes from the fans and media turned to the parking lot behind the 1.5-mile oval’s frontstretch as smoke billowed out above the grandstands. As it turned out, one of the vehicles in the parking lot had come ablaze, damaging both it and one of the cars next to it. Emergency personnel quickly responded to the situation, pulling a civilian out of the burning vehicle and extinguishing the fire. In all, two vehicles were involved in the incident.

Ryan Newman, Tony Stewart, Jamie McMurray and Dale Earnhardt, Jr., all gained crucial points on their way toward clinching a spot in the Chase as some of their competitors wrecked out. Newman and Stewart stretched fuel to earn third and fifth-place finishes, respectively. Newman’s result moved the Hoosier up to 12th in points, 34 points ahead of the cutoff, while Smoke’s surprise moves him 31 points ahead of 31st-place Brian Scott in the points. McMurray’s seventh-place finish helped him move into 15th in the standings, 10 points ahead of Trevor Bayne for the last Chase spot on points as of now. While Earnhardt only finished 13th after running out of fuel on the last lap, he still moved to 32 points ahead of the Chase cutoff in 13th.

While Kyle Busch is largely known for his wins on the track, including his victory in Saturday’s ALSCO 300 in the NASCAR XFINITY Series, the defending champ added a different kind of victory record to his name on Thursday – most victories as a car owner. William Byron‘s win in the Buckle Up in Your Truck 225 brought Kyle Busch Motorsports the team’s 51st victory as an organization, moving it past Roush Fenway Racing for the most victories all-time in the Camping World Truck Series.

Speaking of Byron, the young phenom earned his fourth win of 2016 at Kentucky. In a year where the Truck Series seemed to be wide open, Byron’s suddenly dominated, looking like a bona-fide star for the last month. Not bad for a kid that had never driven a race car three years ago.

Goodyear came under fire from a lot of the drivers after the race for choosing a conservative tire for Saturday’s race after some blowouts and wear issues in a June 13-14 test scared them. The tire manufacturer has come under fire in recent years for being overly careful with tire compounds at repaved tracks. But after the 2008 Allstate 400 at the Brickyard, who can blame them?

Who is mad – Martin Truex, Jr., was fuming after losing a race to a controversial pit road penalty in this week’s edition of ‘How will Furniture Row Racing give away a win on a 1.5-mile track?’ Truex was trying to make his way to his pit stall when he sped up in his timing loop before coming to his pit box, passing a car in the process. Truex attested that move was similar to what drivers have done in the past at Martinsville Speedway and Bristol Motor Speedway, but NASCAR wasn’t buying it.

AJ Allmendinger seemed to be on the verge of a Chase bid on points a few weeks ago, but the JTG Daugherty Racing driver was left climbing out of his No. 47 Chevrolet in anger after crashing out in Kentucky. The Dinger dropped a full 41 points off of the Chase cutoff with the wreck, and as if that wasn’t enough of a problem, Allmendinger came out of the infield care center with his left hand in bandages. The 2014 Watkins Glen International winner is expected to go for an MRI on his hand.

Aric Almirola‘s had a miserable year with Richard Petty Motorsports. After cracking the Chase with a win in 2014 and being the first one to miss it last season, Almirola’s sitting all the way back in 25th in the points after a heartbreaker in Kentucky. The Floridian ran inside of the top 10 for much of the second half of the race, but ran out of fuel in the closing laps and fell all the way back to 20th. Almirola still doesn’t have a top 10 as the season passes the halfway mark. Not good.

Who is happy – Ryan Newman would have loved for Keselowski and Edwards to run out of fuel on the last lap, but the Richard Childress Racing driver still has to be happy after scoring his first top five of the season. As he’s been in each of the previous two iterations of the current Chase format, Newman’s firmly on the bubble as the summer goes on. A run like he had on Saturday could go a long way.

Greg Biffle didn’t make a lot of noise on Saturday, but the Biff came home in sixth after stretching fuel to continue his momentum from last week’s top 10 in Daytona. It’s unlikely that Roush Fenway Racing’s oldest driver will have a shot at the Chase with anything other than a win, but anything that can add confidence is good for his No. 16 team right now.

He didn’t quite crack the top 10, but considering where he was at this point last year, Trevor Bayne still has to be happy with where he sits in points. Bayne passed the No. 21 Wood Brothers Racing team he used to drive for in the standings with an 11th-place run at Kentucky, and moved within 10 points of the Chase bubble as a result. Remember, the 2011 Daytona 500 winner finished 29th in points last season. That makes this year’s run seem like a full-blown career renaissance for Bayne.

Drivers currently locked into the Chase thanks to multiple wins are Kyle Busch, Jimmie Johnson, Carl Edwards and Brad Keselowski. Assuming they attempt to run the remaining races before Richmond they are assured a spot in the final 16. Drivers with one win and in the top 30 in points are Denny Hamlin, Kevin Harvick, Matt Kenseth, Martin Truex Jr., Kurt Busch, Joey Logano and Tony Stewart. If five or fewer new winners are crowned over the next 7 races then they will all make the Chase provided they stay in the top 30 and attempt all the races. The remaining drivers who would make the Chase based on points and their point position at this point in time:

What is in the cooler – If you like crashes, you came to the right place. There were wrecks aplenty in the opening 100 laps of the race. However, passing was a struggle on the repave and the myriad changes left everyone scratching their head. We’ll give this one three 3rd Turn Ol’ Dale Ales.

Where you point your DVR for next week – If the flat turn 3 was your kind of turn, you definitely won’t want to miss the next race. Next up for NASCAR is the July 17 New Hampshire 301 at New Hampshire Motor Speedway. The race will air on Sunday at 1:30 p.m. ET on NBCSN.

Truex didn’t seem to have too many problems passing cars after his penalty. Maybe the drivers need to drive angry.

More than a few cars were passed when they got loose with a car on their rear bumper. Kind of like the good old days.

Thinkin’ Out Loud is getting to be the literary version of Frank Stoddard’s #32 team-someone different behind the wheel every week.