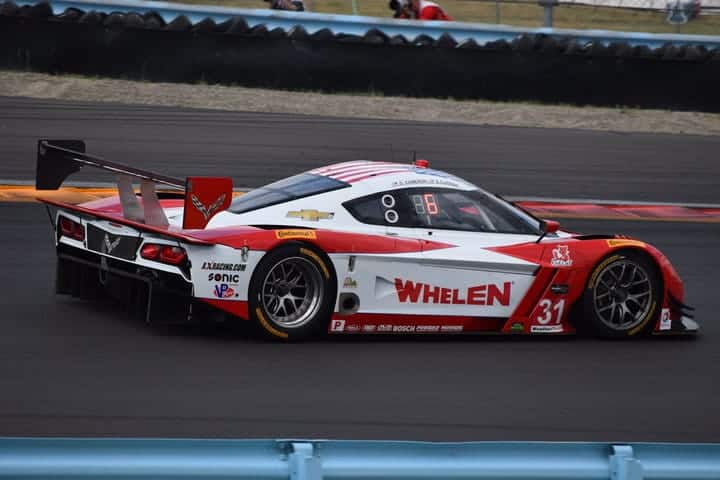 On Sunday at Canadian Tire Motorsports Park, it seemed like Mazda Motorsports had the right stuff early on to take a victory.  However, an air jack issue and a mechanical failure dropped the race directly into the lap of Action Express Racing for the second week in a row.

After Wayne Taylor Racing‘s Ricky Taylor got the jump on the start, Tristan Nunez was able to retake the lead in lapped traffic on lap 12.  From there, Nunez expanded his lead to over 15 seconds.  Nunez led easily to the first round of stops.  However, the No. 55 team had serious trouble getting their air jack to work.  A terrible pit stop result that dropped the team with co-driver Jonathan Bomarito down to fifth.

30 minutes later, the No. 55’s race came to an end when the car lost forward drive on the pit straight.  The issue was traced to a broken hub, leaving Bomarito without power to the right rear corner of the car.  That effectively disabled the Mazda, resulting in Bomarito stalling on the outside of turn 1 and bringing out the race’s first full course caution.

The second round of stops under caution put VisitFlorida.com Racing‘s Ryan Dalziel out in front due to a left side tires only gamble.  Over the next stint, Dane Cameron in Action Express Racing’s No. 31 (on four fresh tires) was able to keep pace with Dalziel as the tires wore.  On lap 80 (55 minutes to go), Cameron was able to use his fresher right side tires to help him take the overall lead away.

After the final round of stops, Cameron ended up with a much larger lead and expanded that for the rest of the race to take his and co-driver Eric Curran‘s first win of the year.

Following the race, Cameron talked about the importance of being able to run your own pace.

“It was a pretty wild day for sure,” Cameron said in the post-race press conference.  “Probably one of the toughest out-laps in my life to try and get some track position and get to the front. The clean air is so important here at this track. If you could get to the front, the car was a lot happier and you could control your own race. We were looking to fix the issues from last week when we came around. I think I’ve finished secind three times before in three races. Never been off the podium but its great to get the win here today. It was one of those races where traffic seems to go your way and the car drove well. Plus, the team was amazing in the pit lane, we made up positions during the stops. It was an important win for us, to get this far and not having won a race, we had to everything we could to get a win today in order to get a win in the championship. So these points are going to help us a lot.”

Ten seconds back was the No. 5 Mustang Sampling Corvette DP of Joao Barbosa and Christian Fittipaldi, completing the second straight Action Express 1-2.  Ricky and Jordan Taylor were third in the No. 10 for Wayne Taylor Racing.  Dalziel and Marc Goossens were fourth, while Tom Long and Joel Miller brought the No. 70 Mazda home in fifth, best of the P2 entries.

In Prototype Challenge, Colin Braun made a rare appearance in qualifying Saturday to take the pole.  However, it was CORE autosport team owner Jon Bennett who started the car, resulting in the No. 54 moving to the back.  JDC/Miller MotorSports‘ Stephen Simpson inherited the lead as a result.

Once the race started, Simpson showed form similar to what he delivered in last year’s Northeast Grand Prix at Lime Rock Park.  Simpson promptly went out and lapped the rest of the class, keeping pace with some of the backmarkers in the Prototype class.  During the first round of pit stops, Simpson even briefly led the race overall.

Meanwhile, Starworks Motorsport’s Mark Kvamme collided with the Prototype of John Pew, spinning both cars out entering the narrow pit straight.  Both cars continued, but not before losing a ton of time.

The full course yellow for Bomarito’s issues resulted in a series of wave-arounds.  This put Performance Tech Motorsports‘ No. 38 of Kyle Marcelli, PR1/Mathiasen Motorsports‘ Tom Kimber-Smith and Braun back on the lead lap.

Since both Simpson and teammate Misha Goikhberg are considered to be silver-rated drivers, the drive time limits that are usually in play in Prototype Challenge do not really apply.  As a result, Simpson drove all but the last 28 minutes of the race before Goikhberg got in.

It was the full course cautions that eliminated JDC/Miller MotorSports’ chances of winning.  The second one flew right after halfway, before they were in their pit window.  The team pitted to top off with the rest of the class and kept the lead, but lost the class lead when they stopped to put Goikhberg in.

CORE autosport was the beneficiary of the pit stop schedule.  The No. 54 team made their final stop with 50 minutes remaining, setting them up for the run to the finish.  Braun passed Kimber-Smith and Simpson when they made their final stops.  When the last yellow came out, Braun and Bennett were guaranteed their second win of the season.

Starworks Motorsport’s No. 8 of Alex Popow and Renger van der Zande, using a similar pit strategy to CORE autosport, finished second in class.  PR1/Mathiasen Motorsports’ No. 52 for Kimber-Smith and Robert Alon was third.

In GT Le Mans, Corvette Racing‘s Antonio Garcia led from the class pole and stretched out a small advantage over Ford Chip Ganassi Racing‘s Dirk Müller.  Bill Auberlen in the No. 25 BMW was also giving chase.  BMW Team RLL‘s second entry (No. 100) had early engine issues that resulted in a trip behind the wall for repairs.  Lucas Luhr would eventually return to the race 11 laps down.

The No. 3 Corvette led through the first round of stops and into the first full course caution of the race.  Co-driver Jan Magnussen was able to keep the advantage over the Fords and the No. 25 BMW until the final round of stops.

However, Ford Chip Ganassi Racing chose to go off-strategy here with their No. 67 Ford of Ryan Briscoe.  After a series of rule changes designed to slow the Ford GT’s were announced prior to the race weekend, Briscoe didn’t have the speed to compete heads-up for the win.  Briscoe stayed out a couple of extra laps past everyone else before making his final stop, then took fuel only.

The result was that Briscoe ended up with a 12 second lead over Porsche North America‘s Frédéric Makowiecki (running on a different pit strategy that put him out of contention) with Corvette Racing’s Tommy Milner another six seconds back.  Briscoe was able to run his regular pace for the final 50 minutes of the race, but couldn’t be caught.  Once the yellow flew with 90 seconds to go, Briscoe and co-driver Richard Westbrook were guaranteed their third straight GT Le Mans class victory.

Corvette Racing’s No. 4 of Milner and Oliver Gavin finished second in class, a big improvement over their form in Watkins Glen.  The No. 3 of Garcia and Magnussen was third, followed by Auberlen and Dirk Werner in the No. 25 BMW.  The No. 66 Ford of Müller and Joey Hand was fifth.

GT Daytona saw pole sitter Alex Riberas fight it out early on with Stevenson Motorsports‘ Andrew Davis.  After the two drivers exchanged the class lead on two occasions, Riberas slowly began to pull away from the rest of the pack in his Porsche 911 GT3-R for Alex Job Racing/Team Seattle.

Riberas led until the first round of pit stops, when he gave way to teammate Mario Farnbacher.  Jörg Bergmeister for Park Place Motorsports took the class lead while Farnbacher dropped to third.  Shortly afterwards, Farnbacher lost the left front wheel out on course.  The bouncing wheel brought out the second full course caution and eliminated the No. 23 from any kind of contention.  They would continue after repairs, but ended up 12th in class and the last car on the road overall, ten laps off of the class leaders.

The field was jumbled towards the end of the race due to varying pit strategies.  However, the class was ultimately decided with a half hour to go.  Fabio Babini had stayed out in the Dream Racing Lamborghini, but was being hunted down by Jeroen Bleekemolen in the Gas Monkey-sponsored Dodge Viper GT3-R.  Bleekemolen ran into the back of Babini entering Moss Corner.  The contact broke the radiator on Bleekemolen’s No. 33, forcing him to pit.  Bleekemolen and team owner/co-driver Ben Keating would finish 11th.

At the same time as the contact happened, Turner Motorsport’s No. 96 BMW M6 GT3 driven by Jens Klingmann swept around the outside to take the class lead.  Once out in front, Klingmann was able to maintain his advantage all the way to the finish to take the GT Daytona class win for himself and teammate Bret Curtis.  Stevenson Motorsports’ No. 6 for Davis and Robin Liddell were second, followed by Paul Miller Racing‘s Lamborghini of Madison Snow and Bryan Sellers.  Scuderia Corsa‘s Ferrari 488 GT3 for Alessandro Balzan and Christina Nielsen were fourth, while Change Racing‘s Spencer Pumpelly and Corey Lewis were fifth.

The race ended under a full course caution because of three late incidents.  First, Sean Rayhall slid the DeltaWing off and nosed into the tires at turn 3.  Just in front of that incident, Magnus Racing‘s Andy Lally was hit from behind and spun.  Not even a full lap later, Lally spun in turn 1 and backed into the tires, likely due to a cut tire.  Lally was unable to restart, forcing IMSA officials to put out the double yellow flag.

The next race for the IMSA WeatherTech SportsCar Championship is the Northeast Grand Prix at Lime Rock Park.  The Prototype Challenge, GT Le Mans and GT Daytona teams will be competing in the 160 minute sprint race.  Coverage begins Jul. 23 at 3 p.m. on FOX.