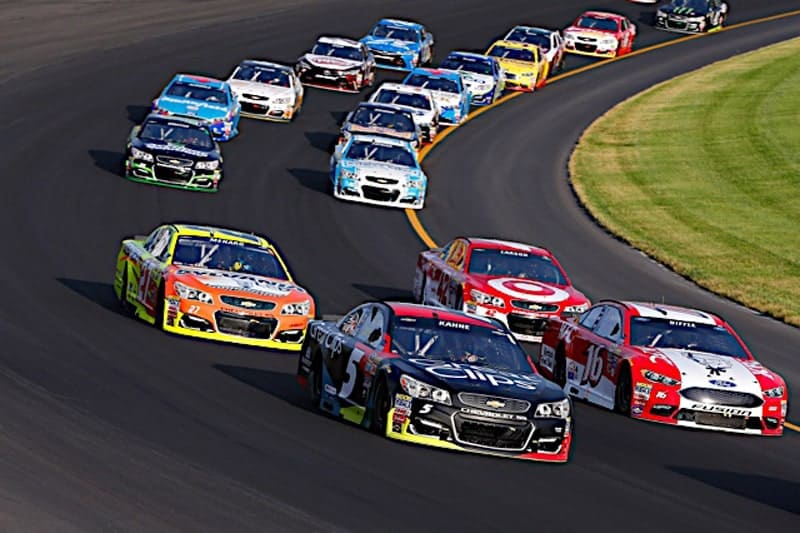 It was a good evening this past Saturday night at Kentucky Speedway for Tony Stewart who finished fifth in what was a landmark 600th Cup start for the 18-year veteran. The top-5 effort was enough to move him safely into the top 30 in overall points meaning he has met the criteria for Chase qualification along with his win at Sonoma Raceway — barring catastrophic finishes or some unforeseen set of circumstances in the eight remaining pre-Chase races. Just as with race winner Brad Keselowski, it was a fuel mileage game for Smoke as the laps wound down: “We just kind of got in a mode there where we took two tires at the end, my car got really tight and really couldn’t run the pace I needed to run,” said Stewart post race to host broadcaster NBC Sports. “So we immediately went in fuel-saving mode. We figured that was going to be our best bet and it worked out.” And work out it did for the veteran in the final season of an illustrious, sure fire first ballot Hall of Fame career. For the record, 600 Cup starts is good enough for 24rd place on the all-time starts list. Stewart will end up in 23rd place on the all-time list come the end of the season, sandwiched between Buck Baker (636 starts) and James Hylton (602 starts)

With 18 races in the books, no-one has led more laps in 2016 Cup competition than Martin Truex, Jr. To date this season, Truex has led 866 laps of the 5167 laps he has run or approximately 17% to put it another way. By comparison, Truex led 567 laps all year in 2015. His only higher season mark than 2015 was 581 laps led in 2007 so as you can see he’s already obliterated his previous best this time around. And of the laps he has led in 2016 the vast majority, 785 to be exact, have come at mile and a half tracks. And given we see five of those type of tracks in the Chase (Chicagoland Speedway, Charlotte Motor Speedway, Kansas Speedway, Texas Motor Speedway and Homestead-Miami Speedway) should we not be talking about Truex as the favorite for the title? Let’s not forget either he made it all the way to final four last season when Furniture Row Racing was a single car team aligned with Richard Childress Racing. Now in partnership with powerhouse Joe Gibbs Racing, Truex and team has access to a slew of additional data to make their Toyota transition smoother. And by the looks of things, it’s really paying dividends. Martin Truex, Jr., 2016 Sprint Cup Champion might just become a reality at this rate.

I have a friend who’s a huge Team Penske fan and Brad in particular. My friend was a supporter of Keselowski from very early on and never more so than when Kes had his spell of irritating just about every driver in the Cup garage (or so it seemed). My friend’s rationale was that the other drivers were simply bullying Brad for what amounted to his burning desire to win. And after Brad’s win at Kentucky, I couldn’t help but think of what was no doubt a huge smile on my friend’s face. “This is a night I’m not going to forget,” said Keselowski in the post race press conference. “Last year we came, and I thought we were the best car, and we didn’t catch a single break, didn’t execute, and those two things kept us out of victory lane, not just here, but a lot of times last year. This week we caught some breaks, we executed, and we were able to win. Not the fastest car, but still a hell of a team effort to be proud of.” The win gives Keselowski four for the season and 21 for his career. Expect more wins this year and make no mistake, just like Truex, Kes is a serious threat for the title.

FOUR: Next up, New Hampshire

Next up, it’s the first of two visits in the next ten races to New Hampshire Motor Speedway. The 1.058- mile-long flat track is a hugely important circuit as it also hosts the second race of the first segment of three races in the Chase as well as this weekend’s upcoming event. This will be Cup race number 43 at the venue, a streak that goes all the way back to July 1993 and the inaugural race which was won by the irrepressible Rusty Wallace – one of ten (yes, ten) races he won that season. Joe Gibbs Racing swept Loudon last season with Kyle Busch winning the July race and Matt Kenseth the Chase race, so expect that team to be strong again this weekend just as they have been at pretty much every track this (and last) season. One of the big elements this weekend is race length which is just 300 miles or 300 laps if you prefer. Put another way, there isn’t an awful lot of time to dig yourself out of an early hole; trouble in the early going can make for a long day at Loudon. For those drivers on the outside looking in at the Chase, caution in the early going might be the best approach.

And finally this week, a quick word on Formula One. This past weekend, reigning champion Lewis Hamilton won his home race (the British Grand Prix) making it four wins in the past five races after a slower start to the season than he would have liked. After a couple tough weeks with the Brexit debacle, it was a good sporting day for Britain with Andy Murray also winning the men’s singles title at Wimbledon – his second triumph at the All-England Lawn Tennis Club. Hamilton now sits just a solitary marker behind Mercedes teammate Nico Rosberg who won the first four races of the year and the recent maiden race in Baku, Azerbaijan and looks hungry for a third straight title (and the fourth of his career). It should make for interesting viewing, watching these two Mercedes drivers battle it out over the remainder of the F1 season for the championship.