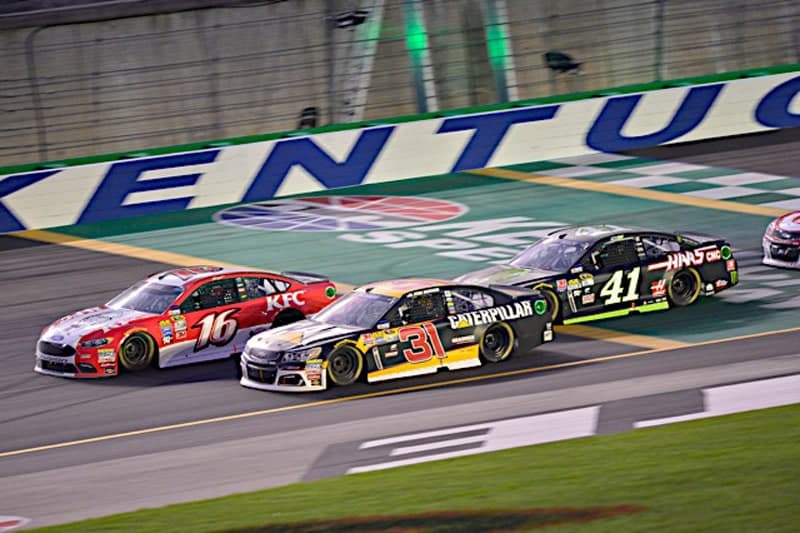 Coming into the 2016 campaign, NASCAR had one goal: improving the on-track product. To do that, it introduced a new aerodynamic package, hoping it would be the way of the future.

The new lower downforce had been viewed as a positive prior to Kentucky Speedway, when there was a backlash from fans wanting better racing. However, Kentucky is freshly paved, something most drivers had been asking for due to the bumpy surface that would literally get cars off the ground going down the frontstretch.

NASCAR hasn’t visited a repaved track since 2012 at Kansas Speedway. One universal product of new pavement is higher speeds. The racing groove at Kentucky also became much more narrow, which led to a lot of drivers having to make daredevil moves to get to the bottom of the track.

What Kentucky also had was a bit of a newer aero package, leaning on it for the 2017 season. A similar package also ran at Michigan International Speedway, where it was hard to pass with some very high speeds on that 2-mile oval.

After seeing some good racing through the majority of the first half of the year, is NASCAR allowed a mulligan? After some of the racing fans saw in the past decade, I say so, but I don’t think Kentucky was a bad race. In fact, I think that was the type of racing that you had better get used to seeing.

Q: “It looked hard to pass on Saturday night in Kentucky. I didn’t like the race because the aerodynamic package didn’t seem to fit that track like most other races this year.” – Tammy Lawmiller, Tulsa, Okla.

A: When people say they didn’t like the racing at Kentucky, I have a question.

The aerodynamic package is about the same it was about a decade ago, where a driver can pull up behind another driver, which in turn makes the car in front loose. That’s what the drivers wanted and it’s what they are getting. I loved the race.

There have been arguments that it was hard to pass, but don’t tell that to Martin Truex, Jr., who raced from 22nd to third in less than 50 laps. I’m trying really hard to see the other perspective of not liking the race, but I can’t seem to wrap my head around it.

Was it because your favorite driver wrecked out? I mean, there were a ton of cautions — 11 to be exact, tying the track record. Jimmie Johnson, Joey Logano, Chase Elliott, Ryan Blaney and many more were in the garage repairing their crashed racecars. And a lot of the reason behind that was because of the aero package, which I’ll argue is the best thing that’s happened in NASCAR in a long time.

Let’s take those four drivers for instance in a case-by-case scenario.

Just after a restart on lap 32, Johnson flat out lost control of his car, something we’ve seen quite a bit of in 2016. The six-time Cup Series champion tried to keep it out of the wall and is honestly lucky that it his was just a single-car accident. At the time, he was running in the back half of the top 10.

Logano’s misfortunes started when the air was taken off the spoiler of his racecar from eventual race winner and Team Penske teammate Brad Keselowski. Coming off of turn 4, the No. 22 Ford got loose, knocking in his right rear quarter panel. He dropped like a rock before blowing a right front tire, ultimately finishing 39th.

Blaney’s was the most the most intriguing. Just like Johnson, he lost control of his No. 21 machine and collected Elliott. He was in the middle of three-wide racing, which was hard to do because of the narrow racing groove.

All of these crashes have one thing in common: the aero package.

If you think the racing was bad because of the narrow racing lane, then you may have a point. But I disagree. I think the racing was good, and if this is the package that NASCAR goes with for 2017 and beyond, it certainly wouldn’t be a bad thing. Drivers are finally in control of the pace, something that couldn’t be said for the past five years.

Q: “Harrison Burton made his ARCA debut last weekend. Do you think he has a better shot than Jeb Burton did, since he already has a race slated for Kyle Busch Motorsports this season?” – Ryan Nemell, Pueblo, Colo.

A: The Burton name is legendary in NASCAR. It might not be up there with the Earnhardts and Pettys, but it’s the next notch below it, alongside the Allisons, Buschs and Labontes.

It’s very rare in any sport that you see a pair of brothers make it to the top level of their profession, something that both Jeff Burton and Ward Burton did, winning some of the biggest events on the schedule. Combined, they accounted for a Daytona 500, two Coca-Cola 600s, two Southern 500 victories and even led every single lap at a race at New Hampshire Motor Speedway.

Now, their children Jeb Burton and Harrison Burton are making it to the limelight.

Harrison is 15 years old; his career hasn’t even really begun yet. Sure, he has an ARCA Series start at Iowa, where he started sixth and finished third, but he looks to be the next KBM developmental driver. We’ve seen how that has gone in the past. Erik Jones is the reigning Camping World Truck Series champion, with William Byron winning four of the first 10 races thus far in his rookie season. The organization just broke the all-time record of wins in its eight-year existence. Impressive.

The younger Burton is aligning himself with the right people, and you would have to think that his father, Jeff, has a small role. If Harrison does become a Toyota driver in NASCAR for the future, watch out, because that lineup is already stacked with young drivers chewing at the bit to get a ride in the Cup Series.

Jeb, on the other hand, is a different story. In 2013, it looked like he was going to be the next star of the sport. He won seven poles for Turner Motorsports and captured a victory at Texas. Many of Ward’s peers and former competitors reached out to him on social media, congratulating him on a job well done.

But where has he gone since then? He competed full-time in 2014 for Turner before running into sponsor troubles, leaving him without a ride. So what did he do? Skipped the XFINITY Series level completely and paired up with BK Racing, an underfunded team in the Cup Series.

With a lack of experience, this was going to be tough from the beginning, and it was. He failed to qualify for eight races, including the two biggest events of the season — the Daytona 500 and Brickyard 400.

The Cup Series didn’t play out as he had hoped, so he started over in the XFINITY Series this season, before more sponsor problems crept up.

It’s safe to say that the 23-year-old has been bitten by the system and hasn’t had much luck in NASCAR. But I don’t think you’ve seen the last of Jeb. He’s extremely talented when given an opportunity, but he needs a ride where he can show it.

For that reason alone, it looks like Harrison might have a better shot than Jeb did. Because in this sport, if you aren’t doing something now, you will be forgotten about. Take Dylan Kwasniewski for example. After competing full-time in the XFINITY Series in 2014, including starting on the pole for the season-opening race at Daytona International Speedway, he’s only competed in six races. This year, he hasn’t competed in any form of racing.

Jeb has an uphill battle, but if owners have seen what he can do, he will be back around while Harrison is progressing through the ranks at a quick pace.

If you have any questions related to NASCAR don’t hesitate in emailing me at dustinalbino20@gmail.com or tweet me at @DustinAlbino. Then check back next week to see if your question has been answered.