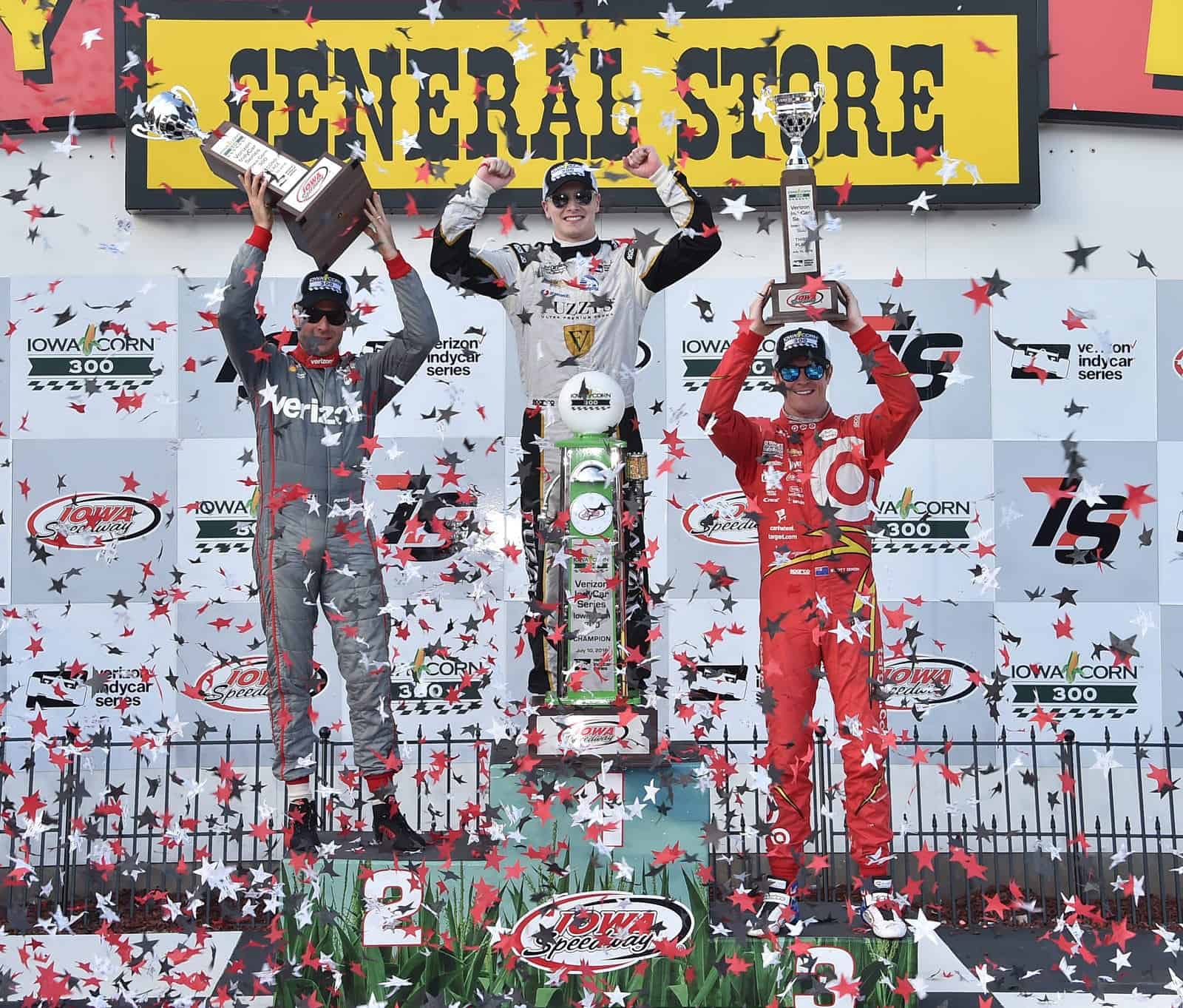 Simon Pagenaud‘s incredible start to the 2016 season has led to a tremendous lead in the points standings, but lurking just behind the Frenchman are two improbably comeback stories waiting to emerge from the shadows.

On the heels of one of the most dominant drives in Verizon IndyCar Series history, Josef Newgarden surpassed Scott Dixon and Will Power to move into second in the series standings, 73 points behind Pagenaud for the lead.

Newgarden’s drive would have been special under any set of circumstances, but they were all the more impressive considering where he’d been just one month earlier.

28 days after sustaining a broken collarbone and a stress fracture in his wrist in a vicious Texas crash, Newgarden drove through intense pain to capture his first victory of 2016.

“We’ve been so close finishing second here twice the last couple of years and second at other ovals but this team, they got it done,” Newgarden said. “They gave me an amazing car and made it easy on me. I could go anywhere with the thing so it made it easier with everything I was dealing with.”

The win continues a string of impressive runs for the Tennessean, who’s driven his No. 21 Ed Carpenter Racing Chevrolet to two podiums and four top 10s in the last five completed races.

Newgarden will also get a chance to add to his streak at a track he conquered last season – the American led 30 of 85 laps en-route to his second-career victory in the 2015 Honda Indy Toronto.

However, Newgarden’s hopes of a title do come with a caveat – he still has a full race’s worth of points to give up at Texas. IndyCar’s ruling that neither Newgarden nor Conor Daly can return to the race when IndyCar returns to the 1.5-mile oval in August means that the fifth-year driver could be due for a massive loss if Pagenaud can avoid harm.

On the other end of the comeback spectrum, 2014 champion Will Power’s already given up a race’s worth of points after an inner ear infection that was misdiagnosed as a concussion in the season opening Firestone Grand Prix of St. Petersburg.

Yet, with six races to go, Power sits third in points with a wave of momentum.

Coming off back-to-back wins at Belle Isle and Road America, Power was considered among the best in the paddock going to Iowa Speedway, but it was Power’s performance on the oval that elevated him to a legitimate championship contender.

Heading to one of his worst tracks statistically, Power drove a clean, consistent race. While he (along with the rest of the field) had nothing for the dominant Newgarden, the Aussie managed to complete two late overtakes of Pagenaud and Dixon to rise to second and secure his first-ever podium in Newton, Iowa.

“I’m just stoked to finish well at Iowa,” Power said. “It was tight racing cause those two guys I was racing against are guys we’re definitely racing in the championship. Obviously I didn’t want to get passed but I wanted to get by them. They’re very trustworthy drivers and very good to race with.

With the surprising result, Power’s good story suddenly turns into a championship possibility.

With six races remaining, Power trails Team Penske teammate Pagenaud by 75 points. However, while Power won’t be able to catch Pagenaud in any one standard race, Penske’s most recent champion has outran his championship counterpart in each of the last three races, and still has the double points finale at Sonoma Raceway to try to make up a large portion of the lead.

There are other championship possibilities, too. Dixon, as always, finds himself in the championship hunt after a podium in Iowa. Chip Ganassi Racing’s top driver trails Pagenaud by 88 points, but a run similar to the one that allowed the New Zealander to reel in Juan Pablo Montoya last season could succeed once again under the right circumstances.

A peek further back also shows two more candidates in Helio Castroneves and Tony Kanaan. Despite failing to make his way to victory lane, Castroneves sits within 91 points of his first title, while Kanaan rests a distant – if feasible – 103 markers back.

It’s likely that all of this will become a non-factor, that Pagenaud will continue the run that’s seen the Frenchman score six podiums and lead convincingly through 60% of the season.

Still, it’s worth keeping an eye on, because if Pagenaud slips up, any one of the above drivers could strike.

And let me tell you, it could make for an incredible story – comeback or otherwise.