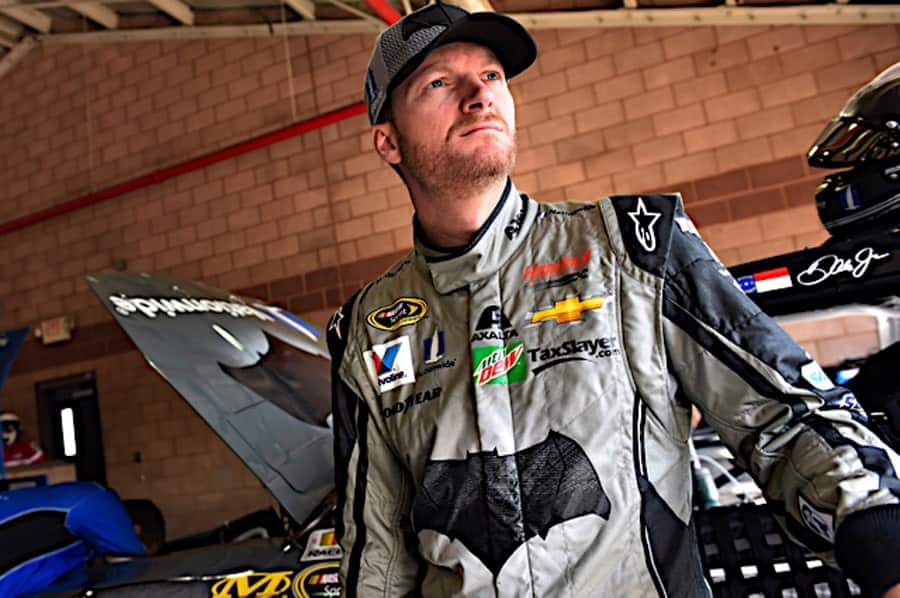 For the second time in the last five seasons, Dale Earnhardt, Jr. will sit out at least one race due to a possible concussion.  A Hendrick Motorsports release didn’t specify the cause, however Earnhardt was involved in a multi-car crash at Daytona two weeks ago and said Thursday his symptoms began before last weekend’s race. The release stated that Earnhardt will be out of the car for at least one weekend and the team will evaluate the situation again next week before Indy. Alex Bowman will pilot the No. 88 this weekend in New Hampshire.

But it’s about so much more than one race.

It’s even about more than two or three races or however many NASCAR’s perennial most popular driver might ultimately miss.

It’s unlikely that Earnhardt’s absence this weekend will have much of an impact on ticket sales; most fans have likely secured their seats.  I hesitate to say that long term, the presence or performance of one driver has a reverberating impact.  But there could be implications for NASCAR and its tracks and broadcast partners.

Coming into this weekend, the driver affectionately known to his legions of fans as Junior was still in not-quite-panic mode about making the Chase. 13th in points without a win, Earnhardt was most likely safe on points as long as he stayed ahead of 15th, the current final Chase spot on points (Tony Stewart bumps the 16th-place driver).  With zero points this weekend, that’s no longer something that a consistent couple of months can guarantee. Earnhardt’s NHMS average is just better than 16th place, a finish that would net 25 points minimum.  That’s a whole lot better than zero.

And if Earnhardt, Jr. misses the Chase, it might effect ratings and attendance.  While it’s a stretch to say that the sport needs him, the sport is better off with its biggest stars in the driver’s seat, no doubt about it.  While it’s not going to have a huge impact on the long-term health of the sport, it’s an immediate sprained ankle – it will heal with time, but a massive inconvenience in the here and now.

For Bowman, it’s an opportunity to showcase his talent on the sport’s biggest stage, perhaps an audition for a full-time ride in 2017 if he can perform well.  Bowman is running a limited XFINITY Series schedule this year but has no full-time gig.  No driver ever wants to see a competitor get hurt, but a good fill-in performance can reignite a career, so it’s important to Bowman, who will be in the spotlight this week.

Nobody wants to see a driver sit out for any reason.  But this one is concerning. Junior isn’t getting any younger.  He’ll turn 42 this year.  And concussions aren’t something that heal completely until the next time a person gets a bump on the head.  They’re cumulative, and Earnhardt has had at least two concussions before this one… that is, two that we know of.  Eventually, they don’t heal as well as they once did.

Concussions are scary ordeals.  I became aware of exactly how frightening an ordeal even a minor one can be a few months ago.  I fell off the horse I was riding and to be honest, I don’t remember much before the CT scan later that morning and even that’s spotty.  My injury was fairly minor, and I was back in the saddle a couple of weeks later.  But even with a minor injury, there were lasting effects.  I found myself having to search for a word in a conversation that ordinarily would have come to me easily. Not knowing what happened for a large chunk of time is also highly disconcerting.

But for me, the most lasting effect isn’t a slip in vocabulary or not remembering a few hours.  It’s the knowledge that despite taking safety precautions, I got hurt, and it could have been much worse.  A friend of mine was in a riding accident recently and may never walk without braces or crutches again.  I was lucky.

And that’s the reality of a concussion, for me. I’m sharing the experience because it did change things for me, a lot, in a way I’d never have expected before it happened.  I never gave it a real thought before, other than strapping on a helmet, but now I will never not think that I participate in a dangerous sport, and I could get hurt.  I like to think it doesn’t effect my performance in competition, but it’s there.

It could happen again.

I can’t speak for Dale Jr., of course, but he’s had a few of these injuries now.  Is there any of that creeping fear for him that I’ve felt all too well?  I hope not.  I hope that next time he climbs into the No. 88, he won’t give a second thought to what could happen.  I’d like to say he’s used to the danger and it doesn’t affect him.  But six months ago, I’d have said that about me.

Earnhardt is a driver on the brink of the rest of his life.  He’s got plenty of years left as a driver, if he wants them, and if taking a few races off now to heal and prepare for those years is going to let him race on his on terms for years to come, then there’s absolutely no question that he’s doing a hundred percent the right thing.

I appreciate everyone's support and prayers and will miss my team terribly this weekend. I'm working with some great doctors to get well.

He has the support of team owner Rick Hendrick, his team and fans, and most importantly, of NASCAR, which will almost certainly grant him a waiver to compete in the Chase if he’s healthy and can qualify.  Allowing drivers with this type of injury the time to let them heal properly is paramount, and NASCAR didn’t always do that, not allowing a substitute to accrue points under the old system, and even until recently in the Chase.  While the Chase might not be a system many fans will ever warm to, the injury waiver is the best decision the sport has made in many years.  There was a time a driver would be in the seat at all costs. In fact, Earnhardt, Jr. has admitted he’s driven races with a concussion because he had to.  That’s in the past, and that’s a great thing.

Hopefully, Earnhardt, Jr. will be back in the driver’s seat sooner rather than later, and that’s in the best interest of everyone, as long as he’s healthy.  At the end of the day, that’s all that really matters in a sport where the human cost is high.  This week’s race?  Suddenly it’s not a big deal at all.

There is more history to this than just two in the last five years. Back in 2002 Dale Jr. suffered a concussion as a result of a wreck at Fontana and only later that season, acknowledged it.
Of course, this preceded the more extensive attention this subject has received in recent years.