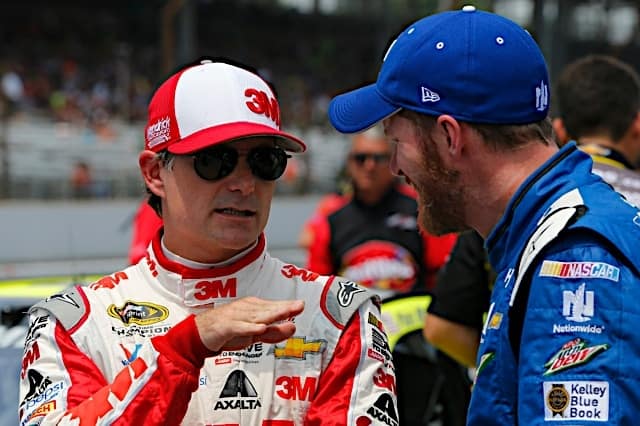 Hendrick Motorsports General Manager Doug Duchardt announced Jeff Gordon could return to NASCAR if called upon by the team next week at Indianapolis Motor Speedway, subbing for an injured Dale Earnhardt, Jr.

“I’m not going to speculate on what-ifs and all that stuff,” Duchardt said of Earnhardt’s situation during a Friday morning press conference at New Hampshire Motor Speedway. “As we gain information through this, we’ll look at the scenario whether it’s short-term or long-term. We’re not sure what will happen beyond Indy.”

In a press release on Thursday, Hendrick Motorsports announced Earnhardt, 41, would miss the race at New Hampshire Motor Speedway due to concussion-like symptoms. Alex Bowman, scheduled to compete for JR Motorsports in the XFINITY Series this weekend, will replace Earnhardt this weekend. It will be Bowman’s first Sprint Cup start since competing in last year’s season-finale at Homestead-Miami Speedway for Tommy Baldwin Racing.

Duchardt would not confirm whether or not Earnhardt was diagnosed with a concussion, however, acknowledging that he had not spoken to the NASCAR veteran. He labeled it as a situation that is between the doctors and Earnhardt.

The timetable for the team to announce if Earnhardt will be in the car for Indianapolis is Wednesday of next week. However, there is no indication of when he could be back piloting the No. 88 for Hendrick Motorsports, with no word on how severe his symptoms are.

Gordon spent the first half of the season as a commentator for Fox Sports, calling the first 16 races of the Sprint Cup schedule. He has a track-high of five wins at the historic Brickyard. Currently, the four-time Cup Series champion is on a family trip in France with his family.

Earnhardt is not a stranger to concussion symptoms. In 2012, he was involved in a crash during a test session at Kansas Speedway. He sat out the next two events, replaced by Regan Smith.

Prior to making his return to the series, Earnhardt must pass a baseline neurocognitive test, something that all drivers must do.

“Every time I think I’m out, they keep pulling back in.”

Wow, Stunning news! Obviously, if you need a replacement for Dale Jr. at Indy, you would like to go with a 5 time winner of the race who won as recently as 2014. I’m sure Axalta, who is the sponsor on the 88 for Indy, had a say in this. Man, it will be really weird to see Jeff in the 88 and Chase in 24 during the same race. Jeff with a good car can win at Indy in his sleep. Imagine if its the 88 and 24 on the front row for a late restart, just bonkers. Jeff might have a chance to redeem that awful Indy race for him last year with the “high drag” package.

No doubt a bit of a relief for the suits concerned about Earnhardt’s absence and it’s effects on the bottom line.

If he would win at Indy (I’d bet $1000 against that happening) would Brian grant him a waiver if he could make it into the top 30? I’d hope not but that bottom line you mention is the most important thing to those suits.

France put Gordon in the 2013 version of the Chase “because he could” so I wouldn’t be surprised if should Gordon win and Earnhardt not return for some reason, France waives the top-30 requirement completely if Gordon would finish the season.

Anything to pull up the crowd and ratings.

Or maybe he just wants out of the booth.