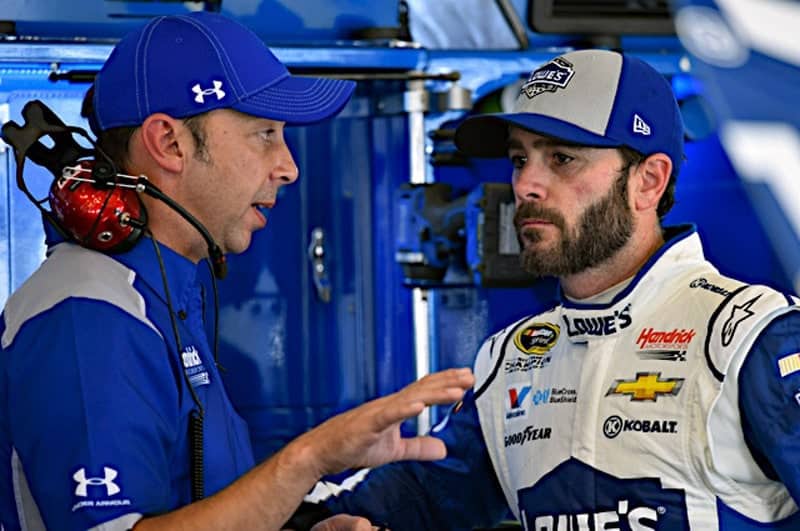 For the first time since Phoenix last fall, Jimmie Johnson will pace the field to the green flag on Sunday at New Hampshire Motor Speedway.

With three Hendrick Motorsports cars advancing to the final round, Johnson needed to improve on his fifth-place time in Round Two. His lap of 133.971 mph topped the chart in somewhat of a surprising pole. Prior to Friday, the No. 48 had a best start of third this year at Richmond.

“I’m really excited,” Johnson said of his fast lap. “It’s been a tough month or two. I’m just proud of the team. We unloaded well and ran some great laps and then on our final run, I thought there was something wrong with the tires. I thought something was wrong with the car, it just wasn’t how it had been. We left with some tough decisions on what to do and we put the car back to what we had unloaded.”

In 28 prior starts at New Hampshire, Johnson has three victories, never starting from first.

The defending winner of this event, Kyle Busch, posted the second best lap at 133.830 mph. The No. 18 team was among the fastest cars all day as he was third in the opening practice.

Martin Truex, Jr. will start third after leading opening practice Friday afternoon. The No. 78 Toyota recorded a lap of 133.371 mph, bur he felt even better of his racecar in race runs.

“It was pretty good,” Truex said of his third-place effort. “We barely made it into the third round, we had to kind of scramble there and I think we made it out with 30 seconds to go to get a run in. I felt like we had a good shot at the pole after practice this afternoon, but the first couple runs it just wasn’t the same and we had to make a lot of adjustments.”

Kurt Busch was fourth in the session at 133.059 with Denny Hamlin tying him on speed, but the No. 41 is higher in owner points, giving him the position.

“Those are victories for us,” DiBenedetto said of his career-best qualifying effort. “You go into the weekend with different goals and one of them is making the second round of qualifying, and especially with both of our cars making it to the second round, that’s great. Both of our teams work together very well, so it shows that we are both in the same ballpark.”

Replacing Dale Earnhardt, Jr. in the No. 88 Chevrolet, Alex Bowman will start Sunday’s race from 20th. He was 13th in the earlier practice session.

The Cup Series will have two practices on Saturday in preparation of the New Hampshire 301 on Sunday, which saw seven cautions last year.

He took out the sand!