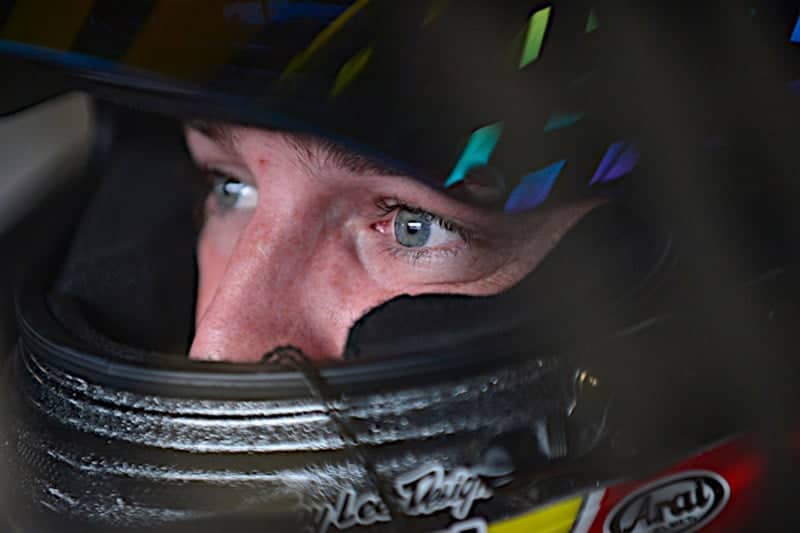 On Lap 77 of the XFINITY Series race, Alex Bowman lost control of his racecar exiting turn 2, coming down the track and spinning Ty Dillon into the outside fence, ultimately sending the No. 3 car to the garage.

In Dillon’s TV interview, he exposed his displeasure of racing against Bowman, who is filling in for Dale Earnhardt, Jr. in the Cup Series on Sunday. Coming into the race, Dillon was third in the point standings.

Following the 200-mile event, Bowman was apologetic, but not happy with the way Dillon raced him leading up to the accident. It’s seems like a coincidence that the two cars got together.

“I wasn’t thrilled with how he [Dillon] drove me prior to the accident, but it wasn’t by any means intentional,” Bowman said. “He drove me way up the race track, obviously he got tight and got over the seam with my right front, got up in the junk, put some wheel in it coming off the wall six inches and six inches enough to turn him around. I didn’t do it intentionally, I was just tight and had a bunch of wheel in the car.”

Dillon spent the next 56 laps in the garage before coming back onto the track. There were many instances in the remaining laps that the two drivers raced side-by-side, but there was no retaliation, at least on this day.

“Obviously, he’s upset, but he’ll get over it someday,” Bowman elaborated. “That put us in a box and we used up a set of tires that we didn’t need to, but obviously we were able to run in the top five for the majority of the day. I wish there was something different that I could have done, but he squeezed me up there and I put him in the wall.”

Bowman went on to pace the field for seven laps, the second most of all drivers as Kyle Busch dominated the laps, leading 190 of 200 laps. Dillon ended the day in 33rd, losing 29 points to championship leader Daniel Suarez.

Bowman and Dillon have raced each other on the track before and will do so again. Putting this in the rear view mirror is something that the 23-year-old would like as he fully expects them to talk it out in the future.

The two drivers didn’t have a prior relationship before this incident.

“I’ll let him calm down a little before so it doesn’t turn into him just yelling at me,” Bowman said. “That’s probably what I would do to, he has every right to be upset. I’ve never really talked to Ty. In the prior laps in the race, he wasn’t pleasant to race with, but you’ll have that.”

The XFINITY Series heads to Indianapolis next week, where Dillon won the event in 2014.

Very disappointed in the way NBCSN handled this incident. They drove the thing into the ground, and also seemed as if they were all in the Ty Dillon/ RCR Fan Club., especially Burton. Really disappointed in Jarrett who is usually the voice of reason. I think Ned would have seen this think different and said so. Bowman took responsibility but didn’t grovel enough for these guy’s I guess. Glad he didn’t and his words were adequate. Bet Dillon will give him room next time. Announcers even seemed to get excited that Austin Dillon would consider retaliation for his brother – really? That would only illustrate what a jerk these guys are, as Dillon’s tough guy, he man, interview, and why many fans dislike them both. Daniel Suarez had a similar car control incident later correcting a tight car which would have perfect to illustrate what happened to Bowman’s car. Difference was Suarez had some room because nobody had driven him to the wall. Both Dillon’s race as if they think everyone should move over for them. Well Bowman doesn’t and the Dillon’s will find during their long career’s, due to POP POP’s money, that many other drivers don’t think as they do either. Bowman seems to be a good kid, hard racer. They need more like him on the track.

You made some good points !!!!