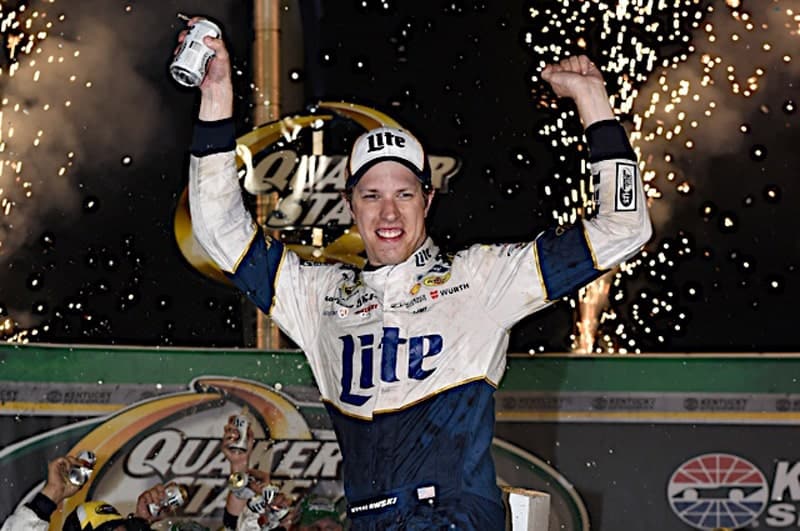 The NASCAR Sprint Cup Series returns to New Hampshire Motor Speedway Sunday, July 17th for the New Hampshire 301. Maintaining track position and optimizing fuel mileage are just two of the many challenges behind finding success at the “Magic Mile”.

The biggest story line going into the New Hampshire 301 this weekend is the surprising news about Dale Earnhardt Jr. Junior will sit out this week, and potentially next weekend’s race at Indianapolis with a possible concussion. Alex Bowman will be filling the seat of the #88 at Loudon.

Here are a few suggestions to keep in mind when constructing your New Hampshire 301 Draftkings lineup.

Kevin Harvick was in position to win the fall race in New Hampshire last season until he ran out of gas, allowing Matt Kenseth to drive by for the win. Last July, Harvick picked up a third place finish. Harvick has the highest fantasy points per race mark with 63.9.

Keselowski is without a doubt the hottest driver in NASCAR. He has two straight wins and could stretch the streak to three on Sunday. Keselowski was the runner up last July and went home with a 12th place finish in September. Team Penske and Keselowski have always found success in New Hampshire, look for that to continue.

Carl Edwards was on the pole for both New Hampshire races last season. In his two races since making the move to Joe Gibbs Racing, he has a seventh and a fifth place finish. Edwards has been the best short track racer this season with wins at Bristol and Richmond, and is a solid bet to run up front on Sunday.

Logano has three straight top-5 finishes at New Hampshire, including a win in 2014. As mentioned earlier, Penske is great at NHMS. Logano considers this his home track, being from Connecticut, and picked up his first career win at Loudon.

Denny Hamlin has the best average finish of all active drivers at New Hampshire Motor Speedway (10.2). Hamlin finished second in the September race last season and has two career wins at the track. He has finished outside the top-10 only three times in 20 starts.

Matt Kenseth has two wins in the last five races at NHMS, including one last season. Kenseth’s lone 2016 win came at Dover, another short track. Kenseth, following the theme of fellow JGR drivers, is one of the best drivers at short tracks.

Dillon has a small sample size of only four races, but has run well in his appearances. In four races, his worst finish was 22nd last September. Dillon hasn’t found much success qualifying in the past and has had to work his way through the field. This week, he will be making his career best start at the track after qualifying 15th.

Tony Stewart is 7th all time in average finish at New Hampshire at 12.5. Stewart has three wins and has finished in the top-10 in 54% of his races at the Magic Mile. He is making his best start in four races, starting in 12th, and will look to race clean in order to keep his chase hopes alive.

Don’t let the number fool you, Blaney ran well in his only race at New Hampshire last season. Blaney was running in the eighth position when he had a wheel issue that forced him to the pits. Blaney ended up finishing 23rd. Ryan Blaney needs to race clean after wrecking out of last weekend’s race if he expects to make the chase.

The Roush Fenway trio did not show well during qualifying, but have been improving as the year has moved along. Biffle will start 28th on Sunday, which could provide some points if he climbs his way through the field. Biffle finished fourth in the last race at New Hampshire, and is coming off a sixth place finish a week ago.

Picking Clint Bowyer could either work out tremendously, or be a disaster. Two of Bowyer’s quality finishes this season have come at short-tracks, an eighth place finish at Bristol and a 12th place finish at Dover. On the flip side, equipment has failed him multiple times this season. New Hampshire has been good to Bowyer in the past.

Almirola wrecked early on in the September race last season, but picked up a 15th place finish in the previous race. In 2014, he finished sixth. Almirola missed the cut after the first round of qualifying, but showed good speed during practice. He is a cheap option for an end of the lineup driver. Almirola will be crossing the start line in 26th.

All stats courtesy of racing-reference

Jeff Burton won this race from the pole. Johnson has the talent to do it too, but you left him out?