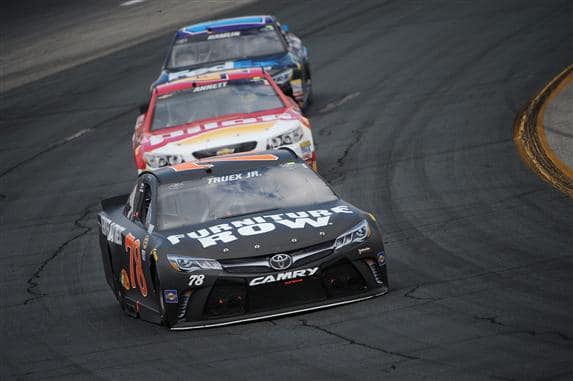 The end of the day at New Hampshire Motor Speedway saw yet another disappointed what-could-have-been result for Martin Truex, Jr.

The driver who has become known for missing out on race wins in his career – even with some of the fastest equipment in the field – Sunday’s New Hampshire 301 saw another bad gremlin bite the No. 78 team in the closing stages.

Leading 123 laps, Truex was victim to two things in the final restarts: Matt Kenseth and a broken shifter.

Kenseth was the first to strike, as the pass for the lead with 44 laps to go ended Truex’s Sunday drive to Victory Lane. Additionally, the No. 78 car suffered a broken shifter and clutch just in time for the next two restarts, dragging the Toyota driver to a 16th-place finish.

Despite the dreary end to a bright day, Truex looks to the big picture, as Loudon will return in the Chase for the Sprint Cup championship.

“A lot of positives we can take out of today, though,” Truex said. “It’s a big relief to come here and run well. We’re doing everything right, we’re taking some on the chin here.” – Zach Catanzareti

It is easy to understand why Ty Dillon was angry with Alex Bowman on Saturday. The two drivers got tangled up on Lap 76 of the New Hampshire XFINITY Series race. Dillon got the worst of the incident, hitting the backstretch wall nose-first after getting hooked by Bowman. Bowman insisted that the crash was unintentional.

The NBC broadcast team, meanwhile, placed blame for the accident on Bowman, but also concluded that the incident was unintentional.  Dillon was not convinced.

“Yeah, you don’t turn people down the straightaway,” Dillon said after watching a replay of the crash. “I don’t know what to say, because I don’t have anything good to say. Except for, I’m glad he’s not around right now.”

Whether Dillon thinks the crash was intentional or not, his anger is understandable. The straightaway is not a place where a driver expects to get turned. Yes, anything can happen in auto racing, but getting turned into the wall like that as Dillon did is one of those things with which drivers do not show a lot of patience or understanding.
That said, the poor finish will not have a big impact on Dillon’s season. With nine races to go before the Chase begin, Dillon is third in points and is 162 markers above the Chase cutoff.  That is over four races’ worth of points.
Dillon has every right to be irritated after Saturday’s race. Yet considering that the crash does not pose a long term issue for Dillon, he has better things to worry about than evening the score with Bowman. – Bryan Gable
IndyCar: Josef Newgarden’s Title Hopes Vanish in Toronto Tangle
If his dominant performance in last week’s race at Iowa Speedway quickly elevated Josef Newgarden into the championship conversation, then his crash in Sunday’s Honda Indy Toronto made those hopes vanish just as fast.
Newgarden’s lap 58 crash on the tight Toronto street course not only relegated the Tennessean to a 22nd-place finish, it set up championship rival Will Power for a surprising race victory. The result of the crash saw the two title hopefuls see their seasons branch out in different ways.
Suddenly, Power’s risen to within 47 points of Simon Pagenaud for the series lead in second. On the other hand, Newgarden has dropped to fifth in the standings, 88 markers back with another guaranteed DNF coming in August’s re-firing of the halted race at Texas Motor Speedway.
Unfortunately for Newgarden, unless the Ed Carpenter Racing star can gain upwards of 130 points on Pagenaud in four of the final five races, his championship aspirations appear to be finished.
BEARDEN: Will Power Claims Third Victory in Four Races at Toronto
Sports Cars: Thiriet by TDS Racing Wins ELMS 4 Hours of Red Bull Ring – On Sunday morning (Sunday afternoon in Europe), the European Le Mans Series took to the 2.688 mile Red Bull Ring for Round No. 3 of the European Le Mans Series. Unlike the World Endurance Championship, ELMS races are four hours in length and feature LMP2 cars as the top class. They’re joined by the GTE class (equilvalent to GT Le Mans in IMSA, although in comparison to the WEC, its similar to GTE-Am) and the LMP3 class, which currently doesn’t race in the United States but should in the near future in either the IMSA WeatherTech SportsCar Championship, or potentially as a third class in the IMSA Continental Tire SportsCar Challenge.

Thiriet by TDS Racing’s No. 46 ORECA 05-Nissan shared by team owner Pierre Thiriet, Ryo Hirakawa and Mathias Beche led for much of the race and took the overall victory. However, they were given the black flag with the orange disc (often referred to as “the meatball”) in the second hour when the right headlight on the No. 46 broke. ELMS rules require both headlights to be in working order at all times, so the team was forced to make a stop for a new nose (acquired from the KCMG team). The stop also affected their driver change schedule for the rest of the race because Thiriet is considered to be an amateur driver and must spend a certain amount of time in the car. The fix it penalty was assessed before Thiriet (who started the race) reached the 90 minute minimum drive time.

Second was the Eurasia Motorsport No. 33 ORECA 05-Nissan of former Champ Car racer Tristan Gommendy, Pu Jin Jin and Nick de Bruijn. This team inherited the lead when the Thiriet by TDS Racing No. 46 was penalized. Third and last on the lead lap was the No. 38 G-Drive Racing Gibson 015S-Nissan fielded by Jota Sport and shared by Giedo van der Garde, factory Ford GT racer Harry Tincknell and team co-owner Simon Dolan.

LMP3 was originally won by the No. 19 Ligier JS P3-Nissan for Duqueine Engineering shared by Dino Lunardi, David Hallyday and David Droux. However, after the race, the Duqueine No. 19 was penalized for violating a “reference pit stop time” during the race.

A new rule for 2016, LMP3 teams are required to perform three pit stops in a time either at or greater than the reference time. This is calculated by the time required to drive down the pit lane at 60 kilometers an hour, refill the fuel cell, and change four tires. This can be breached in a number of ways, but Duqueine Engineering was found guilty of violating the rule and given a time penalty.

GTE was won by JMW Motorsport with their No. 66 Ferrari 458 Italia GT2 shared by Andrea Bertolini, Robert Smith and Rory Butcher. The win came despite a spin in turn 1 for Butcher while running next to the SMP Racing No. 32 BR01-Nissan. Thanks to a full course yellow in the final ten minutes for a spin into the gravel for Krohn Racing’s Tracy Krohn, JMW Motorsport ended up winning the class by a full lap over AF Corse’s No. 51 Ferrari shared by Rui Aguas, Marco Cioci and Piergiuseppe Perrazini. AT Racing’s No. 56 Ferrari shared by Alessandro Pier Guidi and the Talkanitsa’s (Alexander Sr. and Jr.) were third. – Phil Allaway