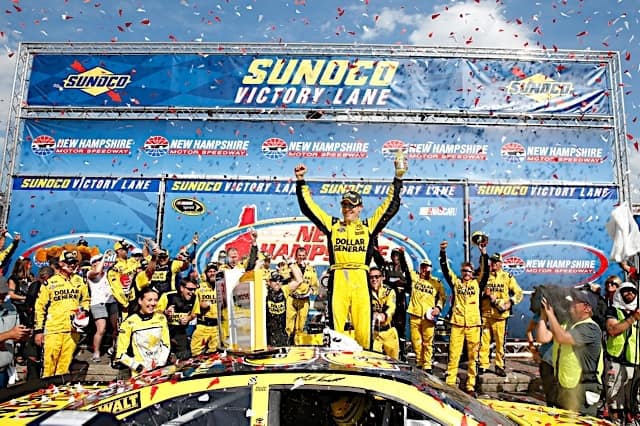 The first excuse for Tony Stewart’s renewed strength was NASCAR manipulation. The next excuse was, “Oh, it was just because of fuel mileage.” Now, for the third time in four weeks, this 45-year-old finished inside the top 5 and there are no excuses left.

Is Smoke the driver he was 10 years ago? Are most drivers over 40? Probably not. But Stewart has made it increasingly clear he’s not happy with a Chase berth if he can’t be competitive, which he’s certainly been in recent weeks. Now, Stewart heads towards a final run at Indianapolis Motor Speedway, the track that means the most to him, on an undeniable roll. The No. 14 won’t be the fastest car in the field, but this three-time champ will roll in with the tenacity that’s marked his remarkable career, and that makes it harder every week to count him out of anything.

What… is the takeaway from the weekend?

At least according to race teams, the tires are getting better. Some even went so far as to praise this week’s rubber as the best that’s been brought. It did lead to increased passing, even on a track that’s known for drivers having to find a way to get by others in a single groove.  There were not a lot of tire failures caused by anything other than contact, and that’s a good sign.

But I’m not quite sold.

Some of the most exciting races used to be at Darlington or Rockingham back in the day because tires gave up so fast — like in under 25 laps fast. When a fuel run is close to 50 laps, that kind of tire wear would lead to a lot of decision making by crew chiefs in a hurry, and that’s exactly what the sport needs. It’s a part of the reason why races years ago kept fans’ interest as cars slipped and slid on tires that were worn to the cords. We’ve had a little of that this year, and we need to see even more of it.

Jimmie Johnson has defined an era in the sport, but he never looked capable of finding Victory Lane despite starting the race up front. Johnson led just one lap and finished a disappointing 12th. It’s hard to say that his time is coming to an end because Hendrick Motorsports has fallen noticeably behind since this veteran’s two wins earlier this year. Even with those two victories, though, it’s also hard to ignore the statistics that say time grows short for the six-time champion to make a serious run at NASCAR immortality.

For the second weekend in a row, Kyle Busch went in as the defending race winner and came out unsuccessful, despite leading more laps than any other driver.  Set up for long runs, Busch was plagued with a series of late cautions and relegated to eighth at the end of the day. It wasn’t a bad race by any means, just not what Busch’s fans probably expected.

Overall, it was hardly a wreckfest, as most incidents were caused by tires cut from contact late in the race. Loudon events at times play out like a short track and that was par for the course. But for fill-in driver Alex Bowman, a cut tire cost him the finish he earned for most of the day. The 23-year-old Bowman, let go from Tommy Baldwin Racing during the offseason, has run a few races for JR Motorsports in the XFINITY Series but doesn’t have a full-time ride.

Bowman reminded fans on Sunday that sometimes a driver’s talent is overshadowed by his lack of competitive equipment. Until that cut tire reared its head, Bowman was running inside the top 10 and looking for more. It’s no easy task to get into a car that belongs to another driver and instantly perform, either. Was Sunday an audition for Bowman? That’s very likely; not only is an open seat a distinct possibility at JRM next  year, but Hendrick Motorsports as a whole has to be looking toward the future. The team has two drivers over age 40 and a third over 35, meaning Bowman’s admirable performance this weekend certainly helped his cause.

Kenseth won for a variety of reasons: he’s good at Loudon; he had track position when he needed it most; his closest competition late, Martin Truex, Jr., had transmission problems; and he’s driving for the best team in the sport statistically. There was no reason he shouldn’t have

won. Yes, Kenseth is often overshadowed by teammate Kyle Busch, but he’s made a career out of being in the right place at the right time. If Kenseth doesn’t win, it’s not often because he didn’t put himself in the right position during the race.

Kenseth’s consistency may not be flashy, but it is certainly effective in the big picture.

How… big a glimpse of the future did we see Sunday?

Really, we’re seeing more and more of it this season … and we have to. With seven full-time drivers age 40 or older and another dozen 35 or over, there is going to be a good amount of turnover in the next five years or so. So far, what we’ve seen is that the sport is in good hands with youngsters like Chase Elliott, Ryan Blaney, Chris Buescher, and today, Alex Bowman.

But this Sunday was a little different, because it was a race without one of the sport’s biggest stars. Yes, Dale Earnhardt, Jr. has missed races before, most recently in 2012, but then there was no nagging voice that wondered whether it was if he’d come back, rather than when. This time, that little ominous cloud is sitting on the horizon making us wonder how many times he can come back, and if he’ll choose to hang it up rather than risk further long-term damage. In that aspect, Sunday provided a glimpse into the future that a lot of fans don’t want to see.

ALBINO: Earnhardt Made The Right Decision

Now that Kenseth failed post-race inspection, what will the penalty be, seeing as he isn’t a Hendrick car?

Failed inspection, that is a true winner. (Sarcasm) Take his win away or any other. Don’t care if NASCAR has NOT done it in the past, start doing it. It might be the only deterrent and NASCAR can save some face of the insanity of a cheater (proven) getting to keep a win.

NASCAR should take the win away if he failed post-race inspection but they won’t. So here is the question that needs to be asked. Once a driver gets that first win and is pretty much locked in the chase, why shouldn’t they cheat to get extra wins? After all, that 15 or 25 or 50 point penalty doesn’t really matter in the big picture.

Anyone know what happened to Johnson on that last pit stop? He went from 10th to 20-something and no mention of anything from the broadcast crew.