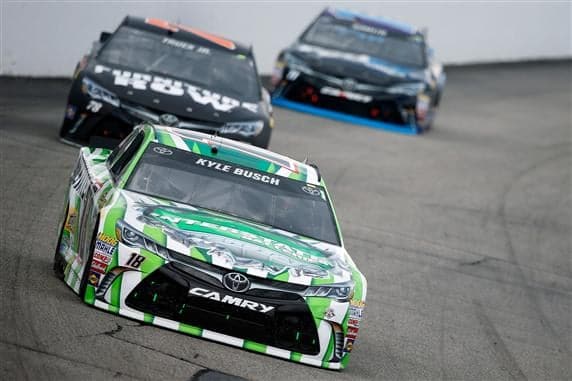 After winning eight of the first 13 races of the NASCAR Sprint Cup Series season, observers were asking the same question: Can anyone beat Toyota?

Joe Gibbs Racing captured seven of those trophies while Furniture Row Racing (who has an alliance with JGR) captured one with Martin Truex, Jr. Suddenly, though the manufacturer went on their version of a dry spell. Through the next five races, Chevrolet won two while Ford won three, locking Toyota out of a spot they had occupied for most of the season: Victory Lane.

Now, that’s not to say JGR chassis weren’t performing well. Toyota had at least one car in the top 10 in each of those events, and in many cases, even led a handful of laps. However, they didn’t have the same “oomph” and many began to wonder if Ford and Chevrolet had caught back up. Or, perhaps was 2016 a case of Toyota peaking too early?

Those concerns were laid to rest Sunday following the New Hampshire 301 at New Hampshire Motor Speedway. Toyota drivers Kyle Busch (133), Martin Truex, Jr. (123), Matt Kenseth (38) and Denny Hamlin (5) combined to lead 299 of the 301 laps. The Chevrolet of Jimmie Johnson and the Ford of Brad Keselowski were each able to lead one lap apiece.

Kenseth was the driver who ultimately made it to Victory Lane, up front the final 31 laps of the race and winning by 1.982 seconds over second place Tony Stewart. Busch finished eighth. Truex was dealing with a broken shifter and fell back to 16th, while Daytona 500 champion Hamlin finished ninth.

Kenseth’s two wins will serve as a virtual lock in the Chase, though the team failed post-race laser inspection which has been a 15-point penalty for teams earlier this season with the same infraction. However, none of those drivers failed inspection after they had won the race.

That said, Toyota continues to be the dominant manufacturer despite a five-race “drought” with JGR leading the charge. The fact Loudon is a Chase track, the teams returning during round 1 of the postseason format in September makes it clear Sunday’s race made a statement.

“Well, that’s really — with NASCAR, it’s our playoff,” team owner Joe Gibbs said. “That’s what it’s all about.  It’s a thrill for us to be in there.  I think the key is, as you continue to work during the year, try and keep your performance up and try and point towards the playoffs.

“When you get to the playoffs, you never know what’s going to happen because it’s a little three-race playoff.  That’s what it is.  You take your best shot, but what you want to do is hopefully continue to improve as the year goes along, and that’s kind of our goal.”

Kenseth, continuing a trend echoed by all of JGR, credited the team-centric atmosphere at the organization for their continued success.

“Yeah, I mean, for me, we’ve got a great race team,” Kenseth said. “We’ve got great race cars and great people.  It starts with the boss here next to me. I’ve got great teammates.  I’ve got great teammates that drive those things every week and there’s great crew chiefs over there, and they’ve been able to get those things where they need to be each and every week, which obviously makes our job a lot easier. Once you get those guys up front, they’re hard to get out of there.  They’re going to be out there leading races and you’re going to have to be just right to beat them.”

Crew chief Jason Ratcliff shared similar sentiments as he continues to look forward to the championship. The No. 20 team, which won five races last year has now positioned themselves dead and center into the conversation after a slow start.

“Well, you learn from Adam (Stevens, No. 18 crew chief) and Kyle (Busch, No. 18 driver) and what they did, what they felt like they did right, what they felt like they didn’t, and also look at our race team and what we could have done better,” Ratcliff said. “TRD is providing great horsepower for us.  Guys are building great cars back at the shop, and as Coach mentioned earlier, they’re working hard, working late nights, and doing everything they can. Championships mean a lot to them. We’re all going to keep learning from each other and keep building on it and do our best to get one of those things, the big trophy at Homestead.”

Loudon was just the 19th race of a 36-race schedule, including a 26-race regular season. With so much competition still left in the year, and Toyota showing no legitimate signs of slowing down, it’s hard to label anyone else as the title favorite.

Kenseth, however, doesn’t necessarily see it that way and certainly isn’t getting too comfortable.

“Well, I mean, I feel like our cars have been pretty strong all year,” Kenseth continued. “I felt like we were pretty strong today from what I saw.  I mean, I think it’s kind of the usual suspects that you’ve got to beat if you’re going to win a race.  I think no matter what package it is, it’s the Nos. 4 and 48 and all my teammates, of course, and the Penske cars.

“I don’t think anybody really leaps and bounds is out there running away from it.  I think the rules are too tight and everybody is pretty close to the same speed, so everybody is always trying to develop their stuff and make it better.  I would like to think we’ve made our stuff better since last month, for sure.”

For team owner Gibbs, he expects the success to continue this season because of how well his organization has gelled. Sunday made the way in which they work together crystal clear; for much of the race’s early portion, JGR chassis ran 1-2-3-4-5 while keeping all challengers at bay.

“One of the things that fascinates me about our sport is the teamwork, and it’s totally different,” Gibbs said. “When I was in football you’ve got one team, you’re working with a team.  Over here you have four, and so the key is how do four work together.  It’s been amazing for me.  It’s a tribute to the drivers and the crew chiefs because you go to the racetrack and you’re trying to solve problems, and somebody may find it, somebody will hit it, and then we gravitate in that direction.

“It’s a fascinating thing, and it’s very hard to get four that work together the way our four do. When you hear the drivers and the crew chiefs, the way they work, I love that aspect of it, and I think we’ve got guys that really share everything in the team meetings. It’s a total team effort, and it goes back to the character of these guys, I think, and the kind of people they are.”

With the elimination-style Chase format, anything can happen, so Toyota is in no way guaranteed the title. But at this point, it’s obvious that everyone else will have to go through JGR and their satellite partner, Furniture Row Racing before they even have a chance to contend.

Was this love letter posted knowing about the LIS failure post race or after?

The cheques are clearing.