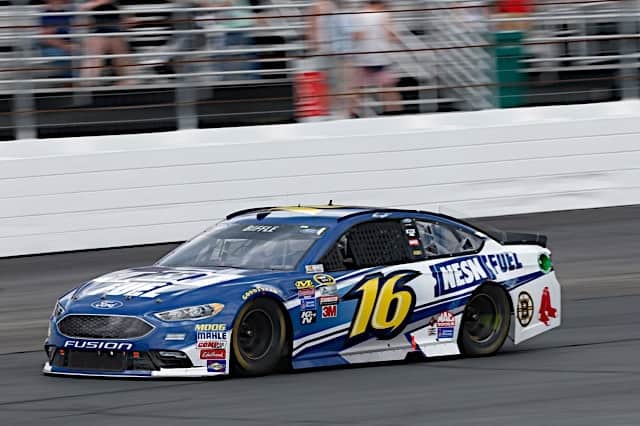 Early on in the New Hampshire 301, it looked like it was going to be another day at the office for Roush Fenway Racing, until a rash of cautions turned the team’s luck around.

During a long green flag run, spanning 112 laps, Greg Biffle went a lap down, as did his two RFR teammates. While taking the wave around on Lap 220, the team needed to run an additional 38 laps to get their lap back when another caution for debris came out. The No. 16 car restarted outside the top 20.

In the last 30 laps of the race, Biffle hopped up to fifth on the leader board, where he was battling for a third-place result with Joey Logano and Kevin Harvick on the last lap. The fifth-place finish is a team best since a fourth-place effort at the same race track last fall.

“A lot of guys wrecked in front of us,” Biffle told Frontstretch of how he was able to get to fifth. “I think about six or eight cars had problems and I was running aggressively. That’ll happen, we benefited from it, so we’re happy.”

It took Biffle until Daytona two weeks ago to get his first top-10 finish of the 2016. In Kentucky, crew chief Brian Pattie played the fuel-mileage game, ending the night in sixth-place.

Finishing fifth marks the third straight top-10 result for Biffle. The last time the No. 16 car had a stretch of three top 10s was in 2014, when he knocked off five-consecutive top 10 finishes, spanning from Pocono to Atlanta, squeaking his way into the Chase.

“We’re going in the right direction,” Biffle said. “This is good for our team, we just need to keep working hard and getting what we can out of our cars.”

Seven races remain before the Chase begins and Biffle sits 23rd in the season standings, 66 points behind bubble driver Dale Earnhardt, Jr. At this point, nothing but a win will get the No. 16 car into the Chase.

His two other teammates Trevor Bayne and Ricky Stenhouse, Jr. sit 17th and 21st in the standings respectively. The No. 6 car is 14 points behind Earnhardt.

As the Cup Series heads to the Brickyard, Biffle finished 19th one year ago.

Hopefully it is a start. Go Biff. Ain’t putting him anywhere now. But a good run for sure.

Thoughts are with the Biff and his family upon his father’s passing today.