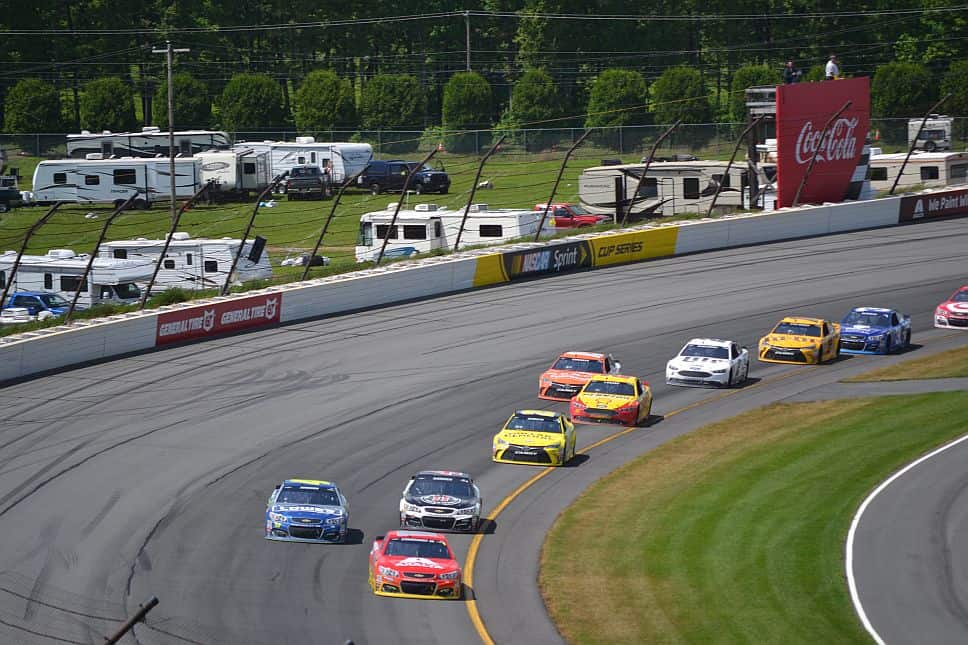 One race past the halfway mark of the 2016 NASCAR Sprint Cup Series season, the overall reception of competition has been quite positive.

With closer competition and fewer negatives about the quality of the product, fans have been quite impressed with the majority of races in 2016. While the on-track product is still not where drivers and fans alike want it to be, it is indeed a major step in the right direction compared to last year, where ratings decreased due to the lack of passing and drama.

But 2016 is different for the world of stock car racing.

NASCAR entered the year with a challenge: finding ways for old fans who cheered for Jeff Gordon to continue actively following the sport. Obviously, many stopped watching immediately, refusing to watch a race without their favorite driver. However, plenty of them have continued to watch NASCAR, following his replacement, Chase Elliott, or a plethora of the other top drivers in the sport.

Additionally, filling the void of having Tony Stewart miss the season-opening Daytona 500 was like blowing a right-front tire for the sanctioning body. While ratings significantly declined for the first two races of the season, with the Daytona 500 down 14 percent for the overnight rating and Atlanta down 27 percent, Fox was able to gain momentum for the remainder of its scheduled races.

As we enter the second half of the NASCAR season, the sport is looking to continue growing the fan base, especially entering the Chase for the Sprint Cup.

A: Well, first off, let’s evaluate the racing first.

With photo finishes to start the year at Daytona and later at Phoenix, the headlines surrounding NASCAR to start the year were indeed fantastic. It couldn’t have gone better. Remember, people don’t really remember who dominated a race if they don’t win. What they care about is who won and how they did it, and having a photo finish surely can’t hurt the sport.

Through 19 races this year, there is an average of 18.95 lead changes per race, which is up slightly from last season’s mark of 18.68 after 19 events.

Additionally, there have been 11 different winners thus far in the season, creating a sense of uncertainty in terms of who will win on a weekly basis. That uncertainty has created much excitement in the NASCAR realm, something that was missing last year, with six drivers winning three or more contests.

“If you haven’t caught a NASCAR race lately, you really haven’t seen some of the best racing we’ve had in years,” Brent Dewar, NASCAR’s chief operating officer, said. “Starting with photo finishes at the Daytona 500 and in Phoenix – and shattering records for green flag passing for the lead at several races along the way – we’re delighted here at the midpoint of our seasons that fans are tuning in and engaging across digital and social platforms like never before.”

While there have been more winners in 2016, another interesting point is the new low-downforce aero package, which created much enthusiasm entering the season. The day races have clearly been some of the best in years, arguably since the 2004-2006 era. However, the night events have been struggling with the new package, with no clear reason as to why it is harder to pass during the night time other than the fact that a track isn’t as slick as when the sun is beaming down on it.

A chart created by USA Today’s Jeff Gluck elaborates on which races fans thought were good and the ones they felt were maybe not so good.

Was it a good race? NH breaks up the 1.5-mile track night race party at the bottom of the poll results. pic.twitter.com/OotWm5FD0y

According to the fan poll created by Gluck, only two of the 19 races this season received negative results, each of which were night races. Meanwhile, 11 races saw more than 70 percent fans who voted say a race was indeed “good.”

But what makes a race “good?” Someone once asked me that, so I broke it down for them like this. A race needs to have a solid mixture of the following:

You may feel that there are other factors that make a race “good,” and there are. However, these are concepts for a person who doesn’t watch NASCAR at all, especially ones with the mindset of, “how can you watch cars go in ovals for over three hours?”

Outside of the racing itself, fans have been more interactive on the digital and social side of the sport. Last year, drivers were actually told to stop for a second and take a selfie with someone, giving a memory for someone more than just the usual autograph.

According to NASCAR, across all NASCAR digital platforms prior to Loudon, NASCAR Digital Media has registered 484 million page views and 145 million on and off platform video views. In addition to the growth of the digital platforms, NASCAR Mobile apps (NASCAR MOBILE and RaceView Mobile) have been downloaded 670,000 times in 2016.

The growth has spread to social media, where NASCAR has expanded its presence dramatically on Snapchat and Twitter.

Each week, NASCAR has a handful of drivers take over its Snapchat account in hopes of giving insight as to what it’s like to be a driver on a race weekend. Sometimes, drivers take over the account mid-week, whether it is at a sponsor appearance or even attending a baseball game.

But where the sport is making one of its biggest strides is post-race, when the race winner takes over the sport’s main Twitter account, answering fan questions for a few minutes. The rare interaction with the triumphant driver has been quite popular, and NASCAR is seeing the benefit of it.

As the sport continues to make strides to reach the next generation, it is incredibly important to continue interacting with fans moreso than any other sport, something NASCAR has done well with for quite some time.

Q: Should Jeff Gordon come out of retirement if Dale Earnhardt, Jr. can’t race at Indianapolis? – Randy A., Memphis

A: This is a very critical situation. With Dale Earnhardt, Jr. possibly missing Indianapolis, one of the sport’s biggest events, it is obvious that Hendrick Motorsports wants a big name to replace him.

Alex Bowman, replacing Earnhardt at Loudon, had a respectable run until he blew a left-rear tire late in the race. However, at a race that is as large as the Brickyard 400 is, HMS officials have already said if Earnhardt can’t race, Jeff Gordon will come out of retirement to pilot the No. 88 car.

Putting Gordon in a car other than anything with the No. 24 on it will certainly be awkward. But what might be more awkward is the fact that he went out in such a spectacular fashion at Homestead last year, and stepping back into the seat of a stock car would be odd, at least at first.

As of now, Earnhardt’s name is on the entry list, but HMS tweeted Tuesday afternoon that an announcement will come at some point

on Wednesday regarding the No. 88 team’s plans for Indy.

A possible key part of Gordon’s return to the driver’s seat will be Axalta, a longtime sponsor of Gordon’s that is sponsoring Earnhardt this weekend.

But the questionable part of this decision is why the team would bring Gordon out of retirement when he is admittedly comfortable out of the driver’s seat. Nineteen races into the season, he hasn’t raced anything since Homestead in November. He has to be itching to get back into a racecar, and this is the perfect opportunity to do so, especially since he won’t have to get into a car that isn’t run by HMS.

However, there are other options that HMS is passing on. Drivers who are looking to make a name for themselves and arguably deserve a chance to compete in Sprint Cup competition could thrive on this opportunity.

Particularly, Justin Allgaier, one of JR Motorsports’ title contenders, is accustomed to Hendrick horsepower after competing in the Cup Series for HScott Motorsports for two full seasons. While he dropped back to the XFINITY Series after losing his ride to Clint Bowyer, he is excelling in the No. 7 car, with six top fives and 13 top 10s through 17 races.

Allgaier was the leader of HScott Motorsports when team owner Harry Scott, Jr. purchased Phoenix Racing in 2014, bringing sponsor Brandt with him. While his best season-ending result was 29th in the standings during his rookie year, he showed potential at the end of 2015, earning two top 20s in the final two races.

Giving Allgaier a shot on the big stage in top-tier equipment would be the ultimate opportunity to judge his talent, just like the team was able to do with Bowman. It gives the organization options moving forward if Earnhardt misses more races. More importantly, with a dedicated sponsor, a chance at the Sprint Cup level could bring him back to NASCAR’s premier division sooner rather than later.

But with Gordon likely taking over the No. 88 car this weekend, it is up to him to make the most out of the 400-mile race. It’s an event he has won five times, with his last triumph at the track coming in 2014.

Just imagine what the reaction will be if Gordon can win while replacing NASCAR’s most popular driver. Comeback, anyone?

Lead changes/passes for the lead can often be a very subjective measure. It would be interesting to know how many were quality lead changes/passes for the lead (i.e. not occurring during pit stop sequences or within a lap or two of a restart).
Is it better? Somewhat. Then again, anything that is even marginally better than the last decade will be portrayed as something revolutionary. There have been a few races where a close finish (usually preceded by a well-timed caution) overshadowed an otherwise vanilla race (Phoenix for one).
I have to be amused by the NASCAR mouthpiece quote about this being some of the best racing in years. What about all the other times in the last decade before this year we’ve told by the same mouthpieces (just maybe with different names) essentially the same thing?

The ratings were DOWN 13 per cent. What is the flavour of the Kool-aid?

Oh but the fan engagements were up. Whatever in the world that means.

I guess that means in Brian’s world that everything couldn’t be better.

Spin it anyway you want. The reality is that fewer and fewer people care about motorsport, specifically Nascar. And the older I get, and more involved in other things the more I don’t care either.