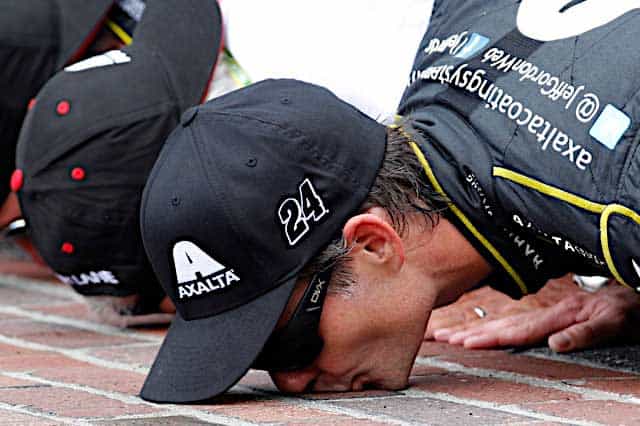 Can you imagine what it would be like if the crew chiefs had to ride in the car with their driver for 400 miles this weekend?  In the early days of open-wheel racing, including at Indianapolis, each car had a mechanic who rode along with the driver. The riding mechanic was there to help adjust or fix the car throughout the race, and also to act as a spotter for his driver. By the 1930s, the on-board wrench sat in the cockpit with the driver as shown in the photo to the right, but in the early days some rode an outboard jump seat rig.

Interestingly, the first Indianapolis 500 winner, Ray Harroun, was the only driver in the field who didn’t have a mechanic with him, to save weight.  It worked, and the lack of a second set of eyes also led to the first known use of something that’s a standard piece in every car on the road today: a rear-view mirror.

I think I’ve shared this video before, but it’s worth watching: two of the best ever to grace the speedway in two completely different types of racecars, out for a drive and talking shop. Super cool.

I’m still trying to wrap my head around the days when cars tested and raced over two-and-a-half miles of bricks. Not only the amount of time it must have taken to lay – each of the three million 10-pound bricks was laid and leveled by hand – and maintain them and the mortar between, but it seems like it’d be one heck of a bumpy ride. Track owners chose bricks after conducting tire traction tests because, at the time, there were few paved roads anywhere, and little understanding of how to build an asphalt or concrete racing surface. So, bricks it was. The track gets its nickname, the Brickyard, from the three feet of bricks that remain at the start-finish line.

Before IMS was paved with those bricks, it was a giant dirt track. The first races there were held on the dirt surface, but despite attempts to keep the surface level, it was bumpy and stones were being kicked up, causing several accidents, some of which were fatal.  After the deaths of a driver, two mechanics and two spectators in a single weekend, the track got its famous bricks.

Indy’s infield holds some typical race track fare, like parking and fan areas, as well as a road course that’s been used for Formula 1 events, among other things. But the massive space also has a sizeable museum that details the track’s illustrious history starting with the first Indy 500. There’s also a golf course, though the original nine holes in the infield have been replaced by four holes of an 18-hole course, the rest of which sits outside the speedway. The original 27-hole course hosted a PGS event in the 1960’s as a lead in to the Indianapolis 500.

How big is it? Check out this revealing graphic of exactly what would fit inside…and it’ll surprise you.

Indy may be storied for open wheels but it sucks for stock cars. It’s flat and boring. The sightlines from the stands are hideous. Its only redeeming quality is that its near the old IRP which produced far better racing than the speedway ever hopes too.

Historically they looked down their noses at stock cars, its drivers, and its fans as dumb ol’ Southern rednecks not sophisticated enough for their rarefied air. Then with the CART/IRL fiasco they needed nascar to save their bacon.

I agree, the hype this place gets in seemingly trying to promote a Sprint Cup race as a nail biter or exciting has never incited me or mine to agree. Boring!

I also agree, sure its Indy but that is about it. This track was built for speeds of 80 to 100mph making racing of today an impossibility since it is now a one groove track. The pit lane is to small for both Indy cars and NASCAR and someone is going to get hurt.

Running the Xfinity race on Saturday does not put more asses in the seats, this is a boring race. The novelty of NASCAR running the brickyard has worn off.

Run the Trucks and Xfinity cars at IRP and send the Cup date from IMS back to a second Darlington event.