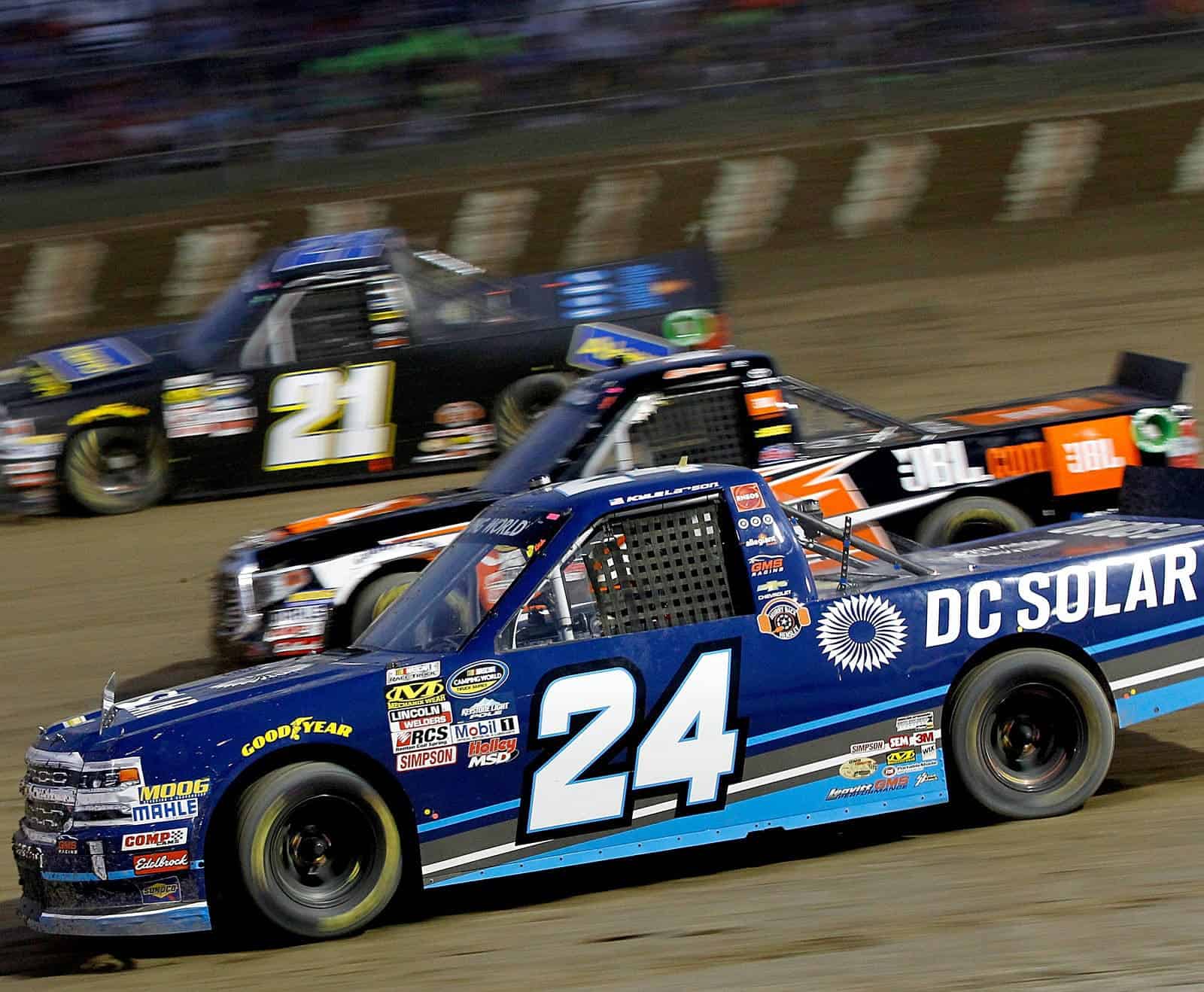 For Kyle Larson, it appeared that heartbreak was set to come for the third-straight time at Eldora Speedway.

In 2013, Larson was undone by untimely cautions as Austin Dillon drove to the victory. In 2014, Larson literally drove the right side off of his truck, knocking down the wall until his machine broke as Darrell Wallace, Jr. won.

On Wednesday, it was a flat tire and subsequent one-lap penalty for intentionally forcing a yellow on lap 53 that seemed destined to keep the third-year Sprint Cup Series driver out of victory lane. However, Larson persevered, drove through the field and withstood late challenges from Bobby Pierce and Christopher Bell to claim the victory in the Aspen Dental Eldora Dirt Derby.

Larson’s victory came at the expense of Pierce’s heartache. Starting on the pole for the second-straight year, Pierce defended all challenges save for one 16-lap segment led by Larson before his issues. When Larson dropped back, Pierce resumed command of the race, leading 102 of the event’s 150 laps.

Pierce often seemed untouchable down the stretch. Challenges from Bell and Tyler Reddick fell flat, and even Larson appeared to struggle to make a move after rising to second.

Then, Pierce got stuck in fourth gear.

Pierce discovered the issue during the race’s penultimate caution on lap 108. Without the ability to change gears, Pierce immediately lost the lead to Larson on the ensuing restart. Still, the 2015 runner-up managed to maintain second, and laps later had closed on Larson for the top spot.

On lap 125, Pierce dove under Larson for the lead, but the move didn’t stick. Pierce slammed the wall, and the damage from the hit caused his right-rear tire to go flat. Pierce spun coming out of turn 2 on the ensuing lap, and was forced to get out of his truck when he couldn’t back it off of the wall. After leading 102 laps, Pierce would finish 25th.

With Pierce out, Larson took over the lead. The Californian would hold it to the end of the race.

“I guess I didn’t really hold him (Pierce) off, he slid in there and hit the wall and got a flat I think,” Larson said. “I hated that I couldn’t race with him, but I was happy when he was out. I almost gave it away again after that restart. I went to the middle of three and four in third gear and I missed a shift off Turn 4 and Bell got into my back bumper. Thankfully, he wasn’t inside of me, because he would have got the lead there and probably would be standing where I am.”

Bell followed in second, falling one spot short of defending his 2015 win.

“Tony (Stewart, track owner) did an awesome job with the race track tonight,” said Bell. “It was really technical, it was really tough to get around and it was really fun, too. Kyle’s been trying to win this race for a long time and it was cool for him to win tonight. The guys at KBM (Kyle Busch Motorsports) worked really hard to put me in this position. I was disappointed we couldn’t repeat.”

The caution flag fell 10 times on the night – three times for oil or debris on track, five times for accidents (one transitioned into a competition caution) and twice for planned competition yellows.

The Camping World Truck Series will return to action on July 30, when the field heads to Pocono Raceway for the Pocono Mountains 150.