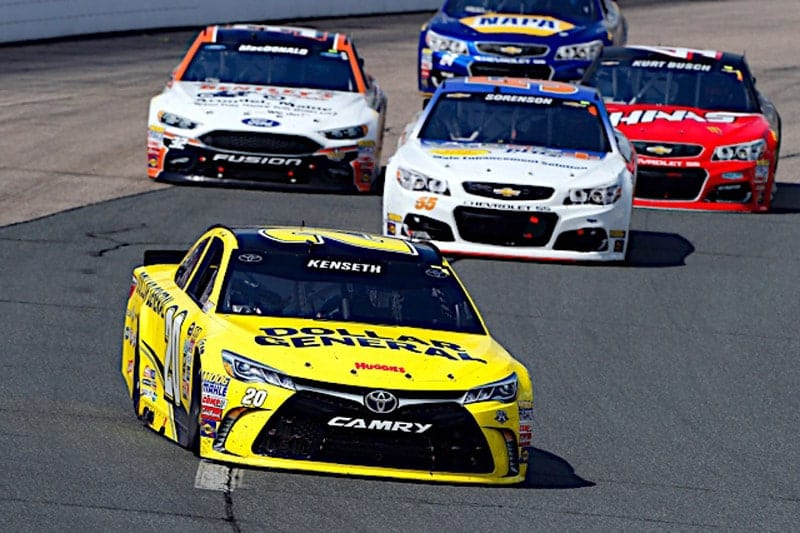 Kenseth’s car was found to have failed laser inspection, and the team was docked 15 points and crew chief Jason Ratcliff was fined $25,000. The No. 20 car wasn’t the first winning machine to fail inspection this season; the car of Kenseth’s Joe Gibbs Racing teammate Kyle Busch was found to not have all lug nuts secured after winning at Kansas.

And with the penalty comes the question: should teams that win a race have the win stripped if they are found to be illegal? In nearly every other sport, that’s the case. Baseball players who use performance-enhancing drugs are suspended for long periods of time; football teams that illegally record other teams’ play calling get fined large sums of money. Cyclists who pump themselves full of oxygenated blood are sanctioned and sometimes lose their accolades.

But in NASCAR, cheating teams are fined points and dollars, but never wins. Is this something that should be off limits or should wins be considered fair game?

Cheaters never prosper, or so the adage goes. Eventually, their misdeeds will come back to bite them and they’ll be worse off than if they played fair.

In NASCAR, teams that cheat during the course of a race are penalized. A drive-through penalty. Starting at the end of the longest line. Point reductions. The one thing that never happens, though? Stripping a win. And that needs to change. If a winning team is proven as having cheated after the race is over, there needs to be more than a point reduction and suspension to the crew chief; the win needs to be stripped and given to the highest-finishing non-cheating team. It’s only right that it happen.

Take college sports, for example. Many times, it’s not apparent that cheating is taking place – say, illegal recruiting, as an example – but once the issue comes to light and is investigated, and if there was wrongdoing, teams (and coaches) are forced to vacate wins, and sometimes even national titles.

It should be the same way in NASCAR.  However, inspections are so thorough that the decision to strip a win could happen in the days following post-race tech. Give the win to the highest-finishing non-illegal driver, and move on.

Ryan Ellis, who runs part-time in all three national series, says that while he understands the reasoning of not stripping a win – “they want to make sure it’s cut for TV and everything like that” – it still takes away the legitimacy of the victory. “If they’re cheating, they’re cheating. They’re not the winning car because they’re not within the rules.”

Ellis hit the nail on the head. The cheating team didn’t win the race at all; they didn’t even participate in the true race. They made their own rules, got caught and need to pay the penalty.

Sometimes the winning car is illegal due to on-track contact. If that’s the case, NASCAR should be a little more lenient in the penalties, especially if the issue can be traced to a hot race track.

“Growing up, there were times where you had a little contact and maybe that led to your ride height being too low or by 1/64 of an inch,” Ellis said about on-track issues. “I feel like we have that tiered system right now of penalties and [NASCAR] should say ‘hey, if your penalty is anything above a certain severity that definitely affects your performance we take away your win, you’re stripped of your win and zero points. That’s the same way it is in short track racing and it’s what fans want the Cup Series to be indicative of what they see in the lower tiers. In my opinion, you have got to strip wins from somebody that’s not legal.”

Changing results after the fact is a black-eye for the team that cheated, not the sport. The Snowball Derby, a prestigious late model race held every December in Pensacola, Fla., has seen multiple winners disqualified in recent years and fans and drivers still come back in droves each year to participate in the race.

NASCAR reserves the right to keep the win from counting as Chase-qualifying as well as not awarding bonus points, but that’s neither here nor there. The record books still show that a cheating driver has more wins than they should and doesn’t celebrate the accomplishments of the teams who played fair.

THE WIN MUST STAND

It is understandable that some fans are upset following Sunday’s Sprint Cup race at New Hampshire Motor Speedway.  The car of race winner Matt Kenseth failed post-race inspection when race officials measured the car outside of the alignment limits dictated by the laser tech station.  NASCAR’s policy in instances like this one has been to penalize the offending team but also to let the win officially stand in the record book.  It may seem odd that NASCAR would allow a team that violated the rules to keep a win, but that policy must continue.

In the case of the No. 20 team, taking the win away would do more harm than good to the integrity of the sport.  Penalization without revoking the win is the policy that the sanctioning body and the competitors have agreed to for many years.  Those are the conditions under which the races are carried out.  NASCAR cannot suddenly decide to take wins away when they did not revoke wins from drivers for similar infractions in the past.  After all, fans have criticized the sanctioning body for making up rules as they go along.  If a NASCAR spokesperson was to say “We are going to take this win away, even though we did not do that in the past and may or may not in the future,” the sanctioning body would look like some fly-by-night operation that cannot consistently enforce its own rules.

Getting back to Kenseth, we must also understand what kind of infraction he and his team incurred.  Usually, when a car fails the laser tech measurement, it is out of alignment by a fraction of an inch.

Remember back in 2010, when NASCAR penalized Clint Bowyer following a victory at New Hampshire?  His car was found to be out of alignment as well, by 1/16th of an inch.  Bowyer’s team, and many fans, insisted that there was no proof that such a small skew was intentional, or that it even contributed to Bowyer’s strong performance.  To illustrate the point, Bowyer held a press conference in the media center the following weekend at Dover in which he held up a quarter, showing its minuscule width to the audience.  The width of the coin was how far Bowyer’s car was outside the tolerance.

NASCAR never backed down from its stance, even when Richard Childress Racing pointed out that a bump from a wrecker could have been the cause of Bowyer’s car being out of alignment.  The sanctioning body came down hard on Bowyer, issuing the No. 33 team a points penalty that essentially ended Bowyer’s championship hopes.

However, Bowyer kept the win.

Kenseth finds himself in a similar predicament.  He drove a car that NASCAR found to be slightly out of alignment.  While “slightly” is still a rule violation, it is not reasonable to say that such an infraction should completely undo a day’s worth of great driving.  If NASCAR cannot prove that the misalignment aided Kenseth’s victory, then it is not fair to take the win back.

Also, do not forget that the No. 20 car passed pre-race inspection, so whatever knocked the car out of alignment occurred during the race.  At a track like New Hampshire, contact happens quite a lot.  At one point, Kenseth tapped Carl Edwards out of the way as he was working his way through the field.  Was that the problem that caused the failed inspection?  I don’t know, but neither do you and neither does NASCAR.  We cannot come rushing in with torches and pitchforks demanding punishment for the “cheater” if there is no evidence of cheating.

If NASCAR really wants to promote an atmosphere of integrity and fair play, the sanctioning body must start with its officiating.  Making an example out of someone by suddenly breaking precedent calls NASCAR’s legitimacy into question, not the offender’s.  Furthermore, trying to decide exactly which inspection violations would cost a team a win is a fruitless endeavor.  NASCAR has to resist the mob mentality and let these victories stand.  Besides, the sanctioning body has proven it can enact justice without revoking wins.

It should be written that a certain level of penalty will result in a win being nullified. With that said, why is it they don’t have a problem taking away a pole if your car is the slightest bit illegal in qualifying?

Ask Ricky Rudd… He had a win taken from spinning our Davey Allison at Sonoma yet Jimmie Johnson and Chad Knaus who’s team owner will gladly belly up to the bar to pay the cheaters tab got to keep all the wins they got by cheating. Oh I mean using a gray area…