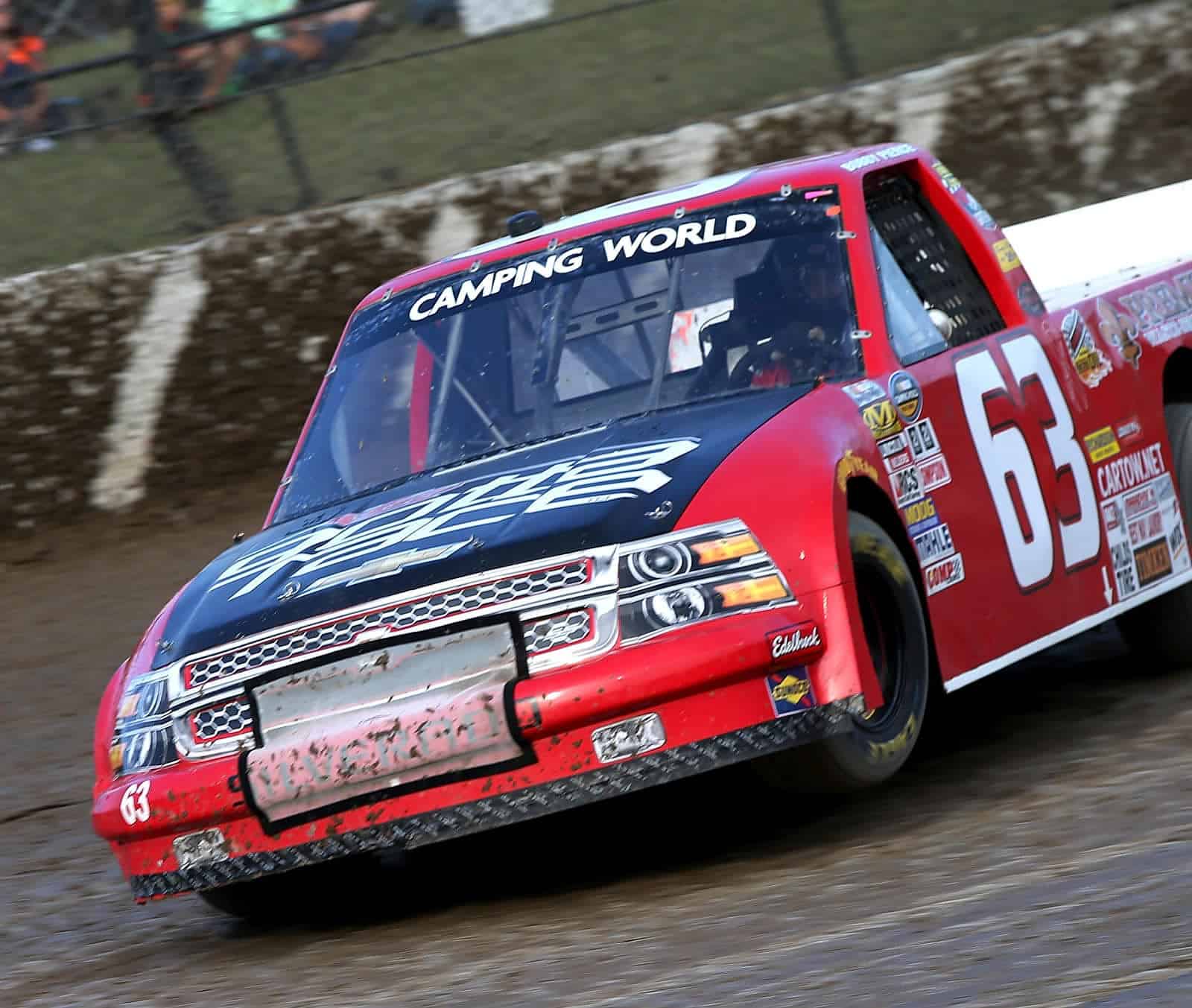 “He looked a lot like I did my first couple of races here,” Larson said. “I follow Dirt on Dirt and I’ve seen a lot of his video highlights. It’s rare that you see a dirt Late Model get all four wheels on the cushion but he does and it’s fun to watch. He and Davenport do that.

“So yeah, while we’re both from dirt, it’s two different disciplines. I’ve watched him a few times now and he’s usually kicking their butts. We have a similar driving style and he’s fun to watch.”

Larson’s praise makes sense. After all, the two drivers not only have similar styles, they’ve had near-identical results in their first two attempts at Eldora glory – one close runner-up followed by a crash while hunting the lead.

Pierce, a dirt late model standout and 2015 Hell Tour champion, started on the pole for the second-straight year after winning his heat and led 102 of the race’s 150 laps before transmission issues plagued his No. 63 MB Motorsports Chevrolet.

Shortly before the race’s penultimate restart on lap 118, Pierce discovered that his machine was stuck in fourth gear. The 19-year-old’s ability to jump out on the restart was affected by the issue, and it ultimately allowed Larson to take over the top spot.

Pierce stayed afloat on the restart, falling only to second, and kept with Larson over the ensuing run. However, when Pierce finally went to make a slide job for the lead, he sailed his machine too deep into turn 3 and bounced hard off of the wall.

The impact led to a punctured tire, causing Pierce to spin and come to a stop facing the turn 2 wall. When Pierce was unable to put his Chevrolet into reverse, NASCAR required the Illinois native to climb out of his car.

The DNF for Pierce resulted in a 25th-place finish.

“The truck was great in the feature,” Pierce said. “We were a little tight but it came in as the race went on. It got slicker. What bit me was that I couldn’t get out of fourth gear during the caution.

“So I was riding around just beating it, trying to get it out. I was second or third. I couldn’t get going but I got to second, caught him and then drove it in too hard. I hit the baby powder and it made it slick. Thats all she wrote because we tore the right rear off the rim.”

The result places Pierce in a familiar storyline, as it echoes Larson’s runs in 2013 and 2014. Pierce contended and led laps in 2015 before being beaten by Christopher Bell, much like Larson did with Austin Dillon in 2013. This year, Pierce’s truck simply gave out after a hard hit into the wall, much like Larson’s did as he tried to chase down Darrell Wallace, Jr. in 2014.

“Heck, it’s always got to be something,” Pierce said. “If you’re going to win a race you have to be good and lucky at the same time. Larson had a flat and he charged through there. Our deal was later on in the race so we couldn’t get it fixed. Even if we did I don’t think we could have fixed it because we tried every single trick in the book to get it out and it just wouldn’t go.”

Whether Pierce’s run will translate to any future starts on asphalt as it did in 2015 remains to be seen, but regardless the 19-year-old remains optimistic that he’ll be racing somewhere.

“Every year we’ve done this race and it’s been good to me so far,” Pierce said. “The Mittler Brothers have treated us well so we’ll do it again next. I need money to do more of these races. Our dirt Late Model this year has been good but even if I don’t get sponsorship to try it, then I’ll be alright. It’s good to run these deals because it makes you a better driver in a Late Model and trying to find sponsors for that too so it all helps out.”