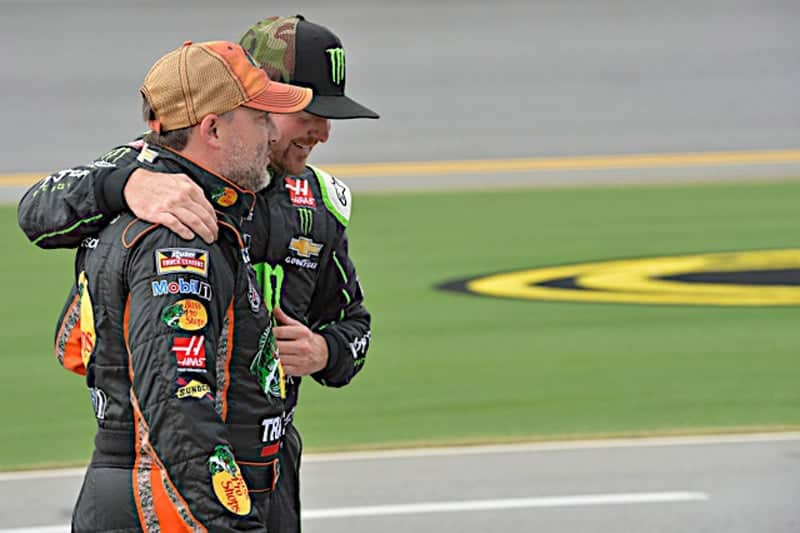 When the NASCAR Sprint Cup Series contested the inaugural Brickyard 400 in 1994, it was a momentous occasion for one reason and one reason alone: it was a NASCAR race at Indianapolis Motor Speedway.

Has the novelty worn off since then? Sure, maybe a little. But the fact still remains: a track with as rich a history as Indy has not one, but two NASCAR series at its speedway each year, with its Brickyard 400 one of the flagship events of the season.

It’s a scintillating offer to run Indianapolis because before 1994, stock car drivers had a much tougher time getting onto the 2.5-mile track; you might as well have doubled as an open wheel racer if you wanted to really garner the feeling of racing through its 9.2-degree-banked turns at breakneck speeds. And on the other hand, once NASCAR did finally make the leap to Indianapolis, it gave track regulars another opportunity to win there — just in very different racecars.

A few have even done both.

It’s a small class, but there are drivers who’ve competed in both the Indianapolis 500 and Brickyard 400, 18 in all. Some have won one of the races, some the other, never both.

Here’s a quick crash course on them.

Better known for his stock car racing exploits, Kurt Busch ran one Indianapolis 500 — the 2014 edition, when he finished sixth while pulling off the double between Indy and the Coca-Cola 600 later that evening. The track isn’t his best otherwise, with a single top 5 and five top 10s in 15 starts.

The owner-driver extraordinaire ran the Indy 500 10 times, coming the closest to victory of anyone listed here so far: fourth in the 1999 showing. Tack on two additional top 5s and four additional top 10s to that tally. He could never quite find the same magic during the Brickyard, though, with two top 10s in 12 starts.

Here’s our first case of a driver still attempting the Indy 500 (he runs full-time in IndyCar) even though his Brickyard days are currently on hold. Juan Pablo Montoya, in four Indy 500 starts, is twice a winner — 2000 and 2015. Not too shabby on the Cup front, either; a top 5 and two top 10s in eight starts.

AJ Allmendinger has just one Indianapolis 500 start to his name, running seventh for Team Penske in 2013. That’s still better than his Brickyard exploits, though; in seven starts, he hasn’t finished better than 10th.

Like Allmendinger, JJ Yeley has just one Indy 500 start on his record sheet: a ninth in 1998. In six Brickyard 400 starts since, he has nothing more than an average finish of 35.8.

In 2006, Sam Hornish, Jr. added his name to the lofty list of Indianapolis 500 winners, drinking from the ceremonial milk jug after winning from the pole. Nothing to speak of on the Cup side in five subsequent starts.

The late Leffler ran once at Indianapolis for IndyCar, finishing 17th in 2001 for Treadway Racing. In five Brickyard 400 starts, he finished in the top 30 only once — 26th for Chip Ganassi that same year.

Her Indianapolis 500 history is, of course, well-known by now, with a top 10 in six of her seven starts, the best coming as a third-place result in 2009. Still looking for that Brickyard break, though.

Another former Indy 500 winner — 1985, by the way — who tried his hand at the Brickyard 400, his attempt coming in the inaugural event. He finished 33rd, his only Cup start ever.

Where would this story be without a Foyt? Though Larry Foyt didn’t have a stellar Indy career, finishing 30th or worse in all three of his Indy 500 starts and coming home 32nd in his lone Brickyard 400.

OK, that’s better. One of open wheel racing’s legends, Foyt is currently tied for the most Indianapolis 500 wins in history, with four, dating back to 1961. He, like Sullivan, drove the inaugural Brickyard 400, finishing a few ticks better in 30th.

The Australian ran the Indy 500 numerous times between 1981 and 1993 with a best finish of fourth in 1983. His Brickyard 400 career shows just one race: yep, that inaugural event, where he came home 38th in his only Cup start.

For all he’s touted as one of the better open wheel drivers of his era, Papis only ran two Indy 500s, finishing no higher than 14th. He finished dead last in his only Brickyard 400 start in 2010.

He’ll add to his tally of Indy starts this weekend when he straps into the No. 32 for Go FAS Racing. Carpentier has one previous Brickyard 400 start, finishing 18th. His lone Indianapolis 500 start ended up around the same: 21st in 2005.

I think Jim Clark might have tried Daytona too. I saw him race a Ford sedan in England.

Jim Clark qualified 24th for the fall race at Rockingham on October 29th, 1967. He finished 30th after his engine packed it in on the 144th lap. It was the first time for a past Formula 1 Champion to ever qualified for a race in NASCAR’s premier series. Clark drove a Holman-Moody Ford, and for some reason was scheduled to be relieved by Jochen Rindt at the half-way point. (Source: “Racing-Reference.info” and “Ford: The Dust And The Glory” by Leo Levine)