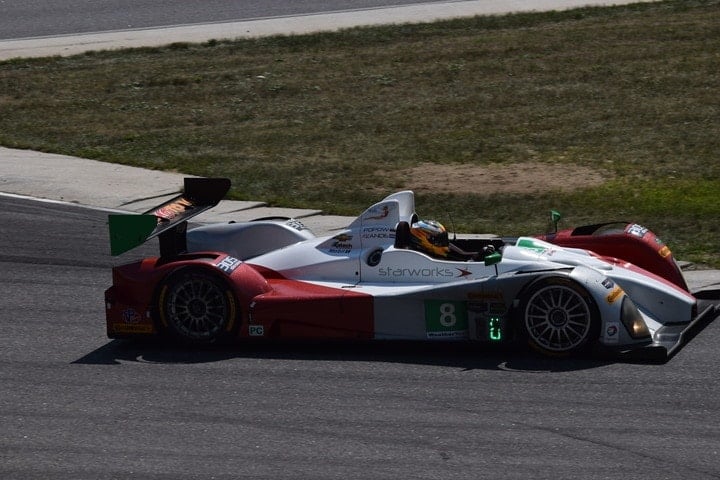 At Lime Rock Park, traffic appears to be the name of the game all weekend in the IMSA WeatherTech SportsCar Championship.  With 31 cars entered for a race on a 1.474-mile road course, space is at a premium.  It is hard to get a clean lap.  On Friday, teams tried to do that to learn about their cars in the hot weather.

Early on, the dominant force in practice was CORE autosport‘s Colin Braun.  He was slowly able to lower the quick time of the session down from the 50-second bracket down into the low 49’s.  However, once Braun had gotten out of the car in favor of teammate/car owner Jon Bennett, Starworks Motorsport‘s Renger van der Zande cut a couple of great laps.

Van der Zande’s quickest lap of the session was 48.808 seconds (108.720 mph), which held up to be the fastest time of the day.  The lap was two-tenths of a second faster than Braun’s best effort in the No. 54.  JDC/Miller MotorSports‘ Stephen Simpson was third in class, followed by Starworks Motorsport’ Remo Ruscitti and PR1/Mathiasen Motorsports‘ Tom Kimber-Smith.

In GT Le Mans, the times at the top were a little more open with more teams fighting for the best times.  Early on, it was BMW Team RLL’s Dirk Werner and Corvette Racing‘s Oliver Gavin who fought over the top spot.  Later, Risi Competizione‘s Toni Vilander put his Ferrari up in the hunt.

However, in the end, it was Gavin who turned the fastest lap in the class with a lap of 51.383 seconds (103.271 mph).  That lap was just over a tenth faster than Ford Chip Ganassi Racing‘s No. 66 of Joey Hand.  Vilander was third quickest, followed by Ford Chip Ganassi Racing’s No. 67 for Ryan Briscoe.  BMW Team RLL’s No. 25, which challenged early on with Werner, ended up fifth quickest with Bill Auberlen at the wheel.

Meanwhile, BMW Team RLL’s No. 100 has had nothing but problems so far this season.  Those issues only continued in the first session as John Edwards stopped out on course to bring out the session’s sole red flag.  The car was towed in and repaired.  It would return for the second practice.

GT Daytona saw teams need to put down their best times early before the tires dropped off a cliff.  Early on, Turner Motorsport‘s Jens Klingmann was fastest in his BMW M6 GT3.  However, on his ninth lap of a session that was only ten minutes old, Magnus Racing‘s Andy Lally turned in a lap of 52.807 seconds (100.487 mph) that was good enough to stand as the fastest lap of the session.

Lally’s lap was two-tenths of a second quicker than the best effort from Klingmann in the No. 96 BMW.  Park Place Motorsports‘ Jörg Bergmeister was third quickest in the No. 73 Porsche 911 GT3-R, while Alex Riberas was fourth quickest in a similar Porsche.  Bryan Sellers was fifth fastest in the Paul Miller Racing Lamborghini, despite suffering with grip issues early in the session.

One of the slickest spots on the track was the entrance to the chicane that bypasses the Climbing Turn.  A substantial amount of rubber build-up led to a number of cars locking up tires and blowing the chicane.

Braun once again mastered the slippery race track to top the timesheets with a lap of 48.990 seconds (108.316 mph).  That lap was two-tenths of a second quicker than Kimber-Smith in second.  Performance Tech Motorsports‘ Kyle Marcelli was third quickest in the No. 38.  Van der Zande’s co-driver, Alex Popow, was fourth quickest in Starworks Motorsport’s No. 8.

Starworks has also entered a third car this weekend, the No. 7 with DeltaWing Racing regular Sean Rayhall and PR1/Mathiasen Motorsports’ third driver (for Tequila Patron North American Endurance Cup races) Jose Gutierrez driving.  Gutierrez drove the No. 7 to the fifth fastest time in the session.

GT Le Mans once again saw a seesaw battle for supremacy between Corvette Racing’s Chevrolet Corvette C7.R’s, Risi Competizione, Ford Chip Ganassi Racing and BMW Team RLL.  The best lap changed 11 times during the session.  At the end of final practice, BMW Team RLL’s No. 25 of Werner was quickest with a lap of 51.164 seconds (103.714 mph).  This lap was a little more than a tenth of a second quicker than Vilander in second.  Corvette Racing’s Milner was third quickest, followed by teammate Jan Magnussen in the No. 3 Corvette.  Ford Chip Ganassi Racing’s Richard Westbrook rounded out the top 5.

GT Daytona saw the times extremely close during the final session.  Alex Job Racing/Team Seattle‘s Mario Farnbacher was quickest in the session with the only lap in the 52 second bracket.  Farnbacher’s lap of 52.992 seconds (100.136 mph) was set in the closing minutes of the session and beat out Stevenson Motorsports‘ No. 6 Audi R8 LMS GT3 for Robin Liddell by more than a quarter of a second.  Turner Motorsport’s Jens Klingmann and Markus Palttala were third and fourth, while Paul Miller Racing’s Madison Snow was fifth quickest.

The only red flag of the second session came when Corey Lewis had a minor electrical problem in his Monster Energy-sponsored Lamborghini Huracan GT3 for Change Racing and came to a halt at the Climbing Turn.  According to teammate Spencer Pumpelly, the team dove in and easily solved the problem.