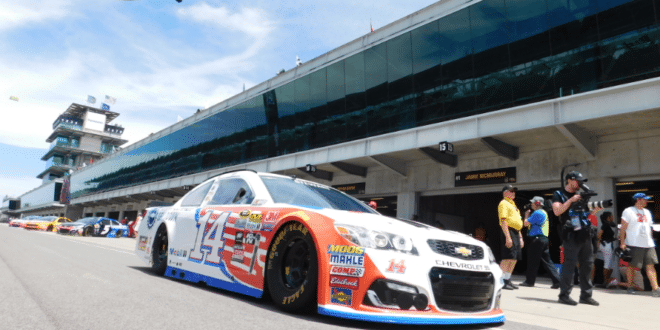 The NASCAR Sprint Cup Series returns to Indianapolis Motor Speedway Sunday, July 24th for the Combat Wounded Coalition 400. This Sunday, one of the greatest of all time returns to the world’s most famous racetrack.

Jeff Gordon returns to action as he fills in for Dale Earnhardt Jr for the next two races. Junior is suffering from concussion like symptoms and has chosen to sit out until he is healthy once again. The news about Gordon has taken some of the spotlight away from Tony Stewart, who is making his last start at a track where he has found great success throughout his career.

Here are a few suggestions to keep in mind when constructing your Combat Wounded Coalition 400 Draftkings lineup.

Kevin Harvick led the most laps and finished third last season at Indianapolis. In both races since making the move to the #4, Harvick has a third place and an eighth place finish. Harvick leads the field in fantasy points per race this season.

“Rowdy” kissed the bricks last season and is looking for back-to-back wins at Indianapolis. Six straight top-10 finishes at the Brickyard and only one finish outside the top-15 in 11 races makes him an obvious start this week.

Logano has three straight top-10s at Indy, including the runner up position in 2015. Team Penske has been fast at Indianapolis in recent years, but have not been able to seal the deal. Logano’s season has picked up some momentum since his win at Michigan.

Edwards started the race on the pole a season ago, but finished 13th. Carl Edwards has three straight top-15 finishes at the track. The #19 Joe Gibbs Racing team has propelled themselves into the forefront of the chase picture with two wins thus far, and will look to continue their 2016 success this weekend.

Keselowski has three top-10s in his last five races at Indianapolis. Brad Keselowski is one of the hottest drivers this season and has been a threat to run towards the front every week so far.

Johnson has had an underwhelming season by the way of daily fantasy points, but this could be a bounce back week. Jimmie Johnson has four wins at Indianapolis, second to only Jeff Gordon for the most by an “active” driver.

The past two showings at Indianapolis for Stewart (17th, 28th) were nothing to write home about, but he has a long history of success at the track. From 2009-2013, “Smoke” did not finish outside the top-10. Tony Stewart is making his final career start at his hometown track, and is looking to stay hot.

A 24th place finish a year ago is Kahne’s worst Brickyard finish since 2007. Prior to that, Kahne had top-10 finishes in four of seven races, including a third place in 2013. Kahne is right on the verge of making the chase on points and needs to run clean and consistent from here on out.

McMurray is one of four drivers in NASCAR history to get a win at the Daytona 500 and Brickyard 400 in the same year (2010). Jamie McMurray has a two week top-10 streak building at the moment, and seems to be warming up at the right time. McMurray is another driver on the brink of playoff contention.

Biffle has hree straight top-10s the past three races in 2016, but has struggled at Indianapolis the past couple years. Yet, from 2008-2012, Biffle’s worst finish at the track was an eighth place nod in 2008. Biffle is driving with a heavy heart this week as his father passed away Tuesday. Greg Biffle will have extra motivation as he crosses the green flag on Sunday.

Paul Menard’s lone Sprint Cup Series win came at Indianapolis in 2011. Since then, Menard has finished in the top-15 in three out of the last four races at the track. Menard has struggle this season after making the chase just a year ago. He is a cheap option with high upside this weekend.

All stats courtesy of racing-reference

Corey Brewer made the move to Frontstretch to follow his dream of covering the sport of NASCAR. He is a die-hard motorsports fan and an avid player of daily fantasy sports.
@BrewerIPA
Previous Kyle Busch Edges Erik Jones for 4th Straight IMS Pole
Next Tony Stewart Continuing Summer Surge, Qualifies 3rd at IMS