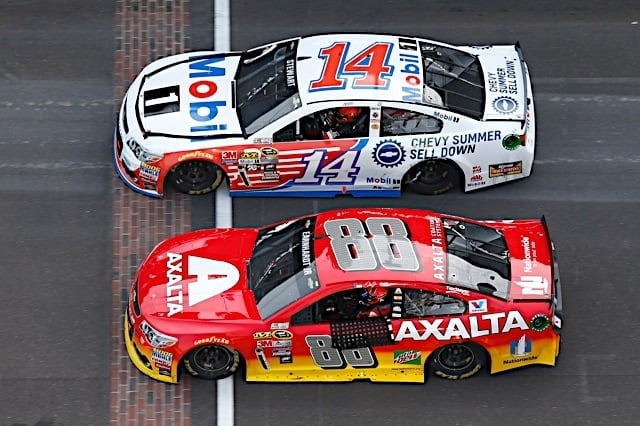 Sprint Cup: It’s a colorful finale for Gordon & Stewart – Though both Jeff Gordon and Tony Stewart will be back next week at Pocono Raceway, Sunday’s Brickyard 400 will [or might] stand as their last races at Indianapolis Motor Speedway.

With fans on their feet, both future Hall of Famers drove side-by-side on the cool-down lap after grabbing solid top-15 efforts.

Needless to say, the respect is mutual between Gordon and Stewart.

“I think everyone should be going over the top for Tony Stewart,” Gordon said after leading a standing ovation for Stewart in the pre-race drivers meeting. “He’s still Tony, short-tempered and chippy at times, stubborn. But when you peel back the layers, he’s just an awesome guy.”

Following a strong third-place qualifying effort, a brash move to second on Lap 1 stood as Stewart’s highlight moment of the afternoon, with the No. 14 car falling to 10th. Staying around the eighth-to-10th-place range for most of the day, Stewart finished 11th.

Gordon had a quiet day in his return to the track, as he maintained a top-20 position before gaining spots near the finish to come home 13th.

Stewart, who’s less than four months away from joining Gordon on the full-time retirement list, received heartwarming treats from IMS, who let him lead the field during the warm-up lap.

To join the warm honors from the speedway, the fans in attendance centered on the two throughout the weekend, making them the true stars of the 23rd Brickyard 400. – Zach Catanzareti

XFINITY: Drivers Battle Summer Heat at the Brickyard – Aside from matching Kyle Busch’s speed, the toughest challenge for the drivers running Saturday’s XFINITY race at Indianapolis Motor Speedway may have been the heat.  Dealing with high temperatures is always a part of racing during the summer, but with track temperatures topping out at 135 degrees and ambient temperatures nearing 100, competitors had to take extra precautions.

“These (XFINITY) cars are notoriously hotter,” Kevin Harvick explained, “so you definitely have to prepare for it as you get up in the morning and go throughout the day.”
The heat race format that NASCAR used for the XFINITY Series race at Indy failed to add any excitement to the competition, but it did help drivers deal with the high temperatures.  Rather than running one contiguous 100 lap event, drivers ran a total of 80 laps with a break after the first 20, giving the competitors a chance to cool down. – Bryan Gable

NHRA: Kings of the Mountain – The NHRA Mello Yello Series drag racing made its live broadcast network debut on FOX with the Mopar Mile-High Nationals from Bandimere Speedway in Denver and saw a slate of veterans hoisting the trophies at the end of the day after a series of great final round races.

For the first time all season, the Pro Stock final did not contain any of the KB Racing drivers, meaning for the first time all season, someone from a team other than KB would score the win. That someone would be Allen Johnson, also known as the King of the Mountain because he has now been to 10 consecutive finals and won seven of them. He scored lucky number seven with a 6.982-second, 197.34 mph pass to beat Vincent Nobile’s 7.037 seconds, 196.82 mph.

“We stunk the place up all weekend during qualifying,” Johnson said. “I wouldn’t have given us a one percent chance to win all weekend. The magic up here is just on our side for some reason.”

As for finally beating the mighty Summit team? “I am sure I am speaking for everyone in the pits, but to break that juggernaut is big,” said Johnson. “We might have got a break or two along the way, but I guess that was that mountain magic. It was great to win here for all the great Denver and Mopar fans and to get the win on live TV on FOX.”

Johnson also raced his way by Drew Skillman, Erica Enders, and Greg Anderson on his way to the finals.

Top Fuel came down to a Don Schumacher Racing showdown between Tony Schumacher and Antron Brown with Schumacher scoring his first win in over a year with a 3.802 second, 324.28 mph pass while Brown hazed the tires. Schumacher beat Doug Kalitta, Steve Torrence, and Clay Millican en route to the finals.

Funny Car was truly a family affair, as the father-daughter duo of John and Courtney Force contested the class. Give this one to experience over youth as John Force edged out his daughter by 0.0162 of a second. The elder Force laid down a pass of 3.965 seconds, 319.45 mph to his daughter’s faster but losing 3.963 seconds, 314.75 mph to score the victory on a holeshot, and at age 67, becomes the oldest driver in NHRA history to win a Funny Car race.

“I didn’t have a monkey on my back, it was a gorilla,” said Force, who hadn’t won since June of 2015. “Let’s face it, the competition is the best I’ve ever seen. It’s tough to race my little girl there and it was a close one. I can do this game. I love it. I don’t have anywhere to go. I am going to keep doing this. I want to keep building this sport.”

John Force also got by Jeff Diehl, Matt Hagan, and Del Worsham before facing off against his daughter in the all John Force Racing final.

Sports Cars: Perhaps Rubbing is Racing? – Traditionally, sports car racing is not necessarily a contact sport. Sure, there are crashes from time to time, just like any other type of motorsport. However, causal contact on-track is normally frowned upon. Last weekend may have been an exception.

IMSA races at Lime Rock Park are usually “grind-em-out” affairs and Saturday’s Northeast Grand Prix was no exception. Back in 2006, David Ragan was dubbed a “dart without feathers” for his debut then-NEXTEL Cup performance at Martinsville. JDC/Miller MotorSports’ Misha Goikhberg’s performance on Saturday was somewhat similar. Goikhberg ran in the back of Starworks Motorsport’s Alex Popow on the original start, resulting in debris on track and the start being waved off. Then, on the actual start, he put Performance Tech Motorsports’ James French in the dirt in turn 1. Later on, Goikhberg spun at the chicane and plowed into the side of GTD co-points leader Christina Nielsen in the Scuderia Corsa Ferrari 488 GT3. While Nielsen ended up with a non-functioning passenger side door, Goikhberg lost a headlight and damaged his rear wing.

Giancarlo Fisichella was nerfed off the road out of third in GTLM late in the race. Alex Riberas put himself out of the race by running into the back of Jeroen Bleekemolen’s Viper GT3-R and breaking a steering arm.

Even the WEC is not immune to bumping and bashing. Porsche Team’s Marc Lieb was given a drive-through penalty after spinning the GTE-Am leading No. 88 Abu Dhabi-Proton Competition Porsche 911 RSR of Khaled Al-Qubaisi into a sand trap. Later, after a driver change, Neel Jani got into a bumping match/battle for third overall with Audi Sport’s Andre Lotterer.

An additional bump from one of the SMP Racing P2-class BR01-Nissans pulled a piece of bodywork loose, resulting in not only a full course caution for debris, but also “the Meatball” (black flag with the orange circle) for Jani to pit for repairs. It was a rather expensive weekend bodywork-wise. – Phil Allaway

Red Bull looked to have something for Mercedes, but third-place finisher Ricciardo felt that Mercedes held back in the early stages.
While the battle up front may have been non-existent, Red Bull and Ferrari engaged in the best battles, with Ricciardo and Sebastian Vettel trying to outdo one another with Vettel taking fourth, while Red Bull’s Max Verstappen bested Ferrari’s Kimi Raikkonen to fifth. Though Raikkonen had the fresher tyres at the end, he was unable to get past the 18 year-old driver, who is proving himself worthy of being on the senior Red Bull team since moving up earlier this year.

The race was relatively clean, as everyone in the field got away from the start unscathed, and Jenson Button from McLaren was the only retirement. There were no caution flags, and a spin from Renault’s Jolyon Palmer was the only on-track incident.
The German Grand Prix will be next weekend and is the last race before the summer break. – Huston Ladner