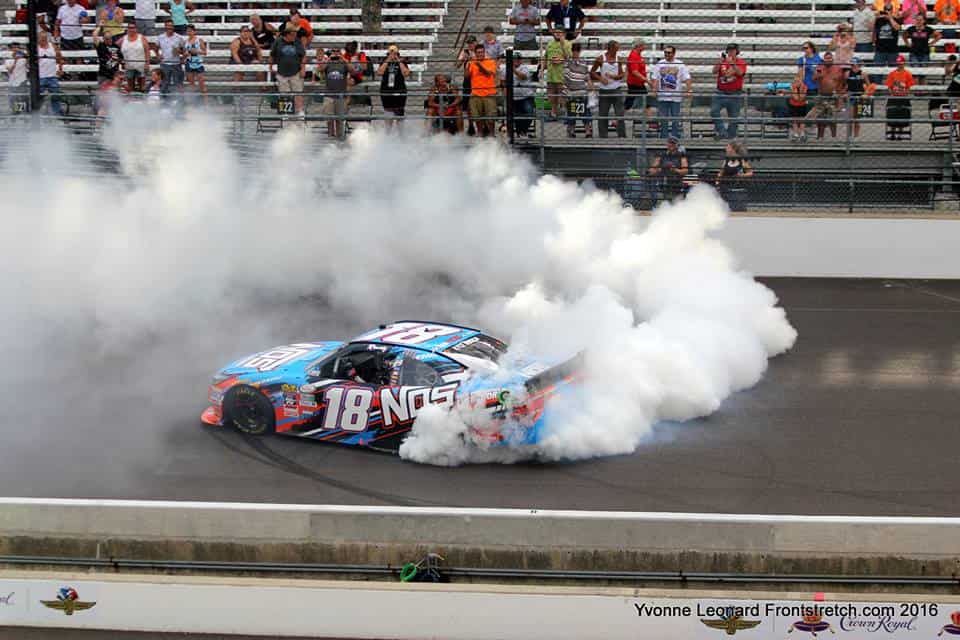 The XFINITY series has been running at Indianapolis for five years and for the last four it has been Kyle Busch’s playground. After a 22nd place run in 2012 Busch has won three of the last four races and two in a row. Saturday’s effort was especially dominant, with Busch leading all 20 laps of his heat race and 59 of the 60 laps of the feature. The win extends his already impressive XFINITY victory record to 83.

Starting with the heat races the lack of passing that plagues the series when it runs at IMS continued The 40 laps of heat racing saw 13 passes among the top 10 with only two changes in the top 5 of both races combined. In the feature race, the only lap that Busch did not lead was scored for Brendan Gaughan, who stayed out longer on the initial run before green flag stops. Busch survived two late race restarts that pushed the event into overtime but was really not challenged for the win.

Kevin Harvick clawed his way to a second place finish thanks to fresh tires at the end of the event but found himself embroiled in a battle with Kyle Larson on the first lap of the Green-White-Checkered finish and never had a real shot at Busch. Paul Menard managed to work his way past Larson when the tussle with Harvick ended to complete the podium. The key point of the race was when the first caution flew with 10 laps to go in the event. Busch was a sitting duck who had to stay on the track or he would not have had time to get back to the front through all of the cars that would have stayed out. Most of the field came in for tires but Busch was simply too strong and fended them off over two restarts to score the triumph.

The cautions flew for a spin for Erik Jones, who had previously contacted the wall and damaged his right rear to the point of a tire rub. When he returned to the track it eventually failed and resulted in a spin. The second was for an accident with Ray Black Jr. and Harrison Rhodes that ended up hitting an inside wall on the back straight that resulted in both drivers taking a ride to the infield care center.

Points: Thanks to wins, Daniel Suarez, Elliott Sadler and Jones are currently in the Chase. The remaining eight spots will be filled by Ty Dillon, Justin Allgaier, Brendan Gaughan, Brandon Jones, Brennan Poole, Darrell Wallace Jr., Ryan Reed, Ryan Sieg and Blake Koch. There are seven other drivers who have attempted all 18 races contested so far in 2016.

Allgaier has had several shots at the Dash 4 Cash in the XFINITY series, but he’s never sealed the deal. Saturday he finally got it done with a pass on Sadler during the GWC that put him in position to secure the $100,000 prize. With Clint Bowyer’s struggles in the HScott Motorsports seat that Allgaier used to pilot it is becoming more and more apparent how good of a driver he is. The “win” today was as much about pride for Allgaier and his team as it was about the money.

Jeb Burton started the season anticipating a full season run but that quickly fell apart when the team folded. The Lilly’s Diabetes 250 was Burton’s first run with the No. 98 of Biagi-Denbeste Racing. Burton qualified 11th and came home in 12th. Burton had been out of the car for six races but finished 13th and 11th in his last two races before he lost his ride. Burton continues to search for rides and try and keep his dream alive. He is also scheduled to run at Richmond for BDR.

Erik Jones owned his heat race and looked to be the only driver who could hang anywhere close to Busch. Unfortunately for Jones, he lost the back of the car on lap 142 and hit the wall hard enough to damage the car and push the fender in on the right rear tire. While he pitted and the team pulled the fender away from the tire, it continued to rub and eventually cut the tire down to bring out the first caution of the race on lap 50. A day that held so much promise for one of the future stars of the sport, it ended with a 22nd place finish.

In 2011 NASCAR pulled the XFINITY race from Raceway Park where it had run every year with Kroger sponsorship since the series began. It was moved to Indianapolis Motor Speedway to supposedly make the weekend a destination weekend that would inspire more people to travel to the Brickyard 400. While the number of people in the stands has stayed surprisingly strong as XFINITY races go, the racing continues to be some of the worst on the schedule. The track at Lucas Oil Raceway is one of the best asphalt tracks in the country and puts on fantastic races. This experiment has run its course and needs to end.

Speaking of bad racing, what could make the XFINITY race worse? Let’s cut the field in half and run heat races. While the concept of heat races is great and will be a boon for much of the schedule in the national touring series, it is a horrendous idea at IMS. There are quite a few things that would help the racing at IMS in the XFINITY series. Heat races are not one of them.

When the race is a veritable parade and the number of on-track passes can be counted on two hands it is hard to select and underdog performer. We’ll give a shout out to David Starr who qualified 30th and crossed the finish line in 24th. Starr is another driver who lost his ride part way through the season. Coming home six spots better than where he started during a race where moving around cars was extremely difficult was a great display of Starr’s ability.

Obviously Busch won again in the XFINITY series and took his seventh checkered flag of the season which is nearly half of the races that have been run in the series. Harvick, Menard and Larson were second third and fourth respectively. Logano finished in eighth so that half of the top 10 were Cup regulars in the race. Matt DiBenedetto was the other Cup interloper who start and parked for 39th position.

“We started off decent and passed some cars on the first restart and started struggling and fell back to 16th. We were too tight. We worked and worked on it and finally that late caution came out. John Hanson made a good adjustment and we had a great pit stop. We were able to get past the 16 and 6, got the lucky dog and felt like we were probably a 10th place car at the end. We just needed another caution to truly get caught back up. I am really proud of everyone and I am looking forward to getting back in the 98 again soon.” – Jeb Burton

“Now I’m racing my teammate. That obviously changes the game. Knowing he has the same stuff I do how I force that pass. On the exit of four he got behind the 42 and washed up. I hit turn four the only time all day I hit it perfectly. I was able to run it wide open, I ran up next to him and got side-by-side and was able to pass him.” – Justin Allgaier

“If the situation allows me to be successful, sure I’d love to go Cup racing. I’m in the best XFINITY team that exists. There are some earlier moves I could have made but they wouldn’t have been the best. I got myself in a situation that I wasn’t the happiest with and I had to recover from that. I’m trying to be smart about the moves I make going forward. I’ve got a long career in front of me.” – Chris Gayle No. 18 Crew Chief

The Indianapolis Motor Speedway is hallowed ground where legends of motorsports have tread and many have failed to succeed. It should be reserved for the upper echelons of auto racing series and not developmental series. The racing at LORI was routinely the best on the schedule in the XFINITY series and it was wrested away to put on a snoozefest of an event at IMS. The time has come to admit that this whole idea was a bad mistake and it is time to move back to LORI.

The series packs its wagons and hits the trail to Iowa for 250 laps at Iowa Speedway. Sam Hornish won there in the spring and Ryan Blaney is the defending champion of this event. The show can be seen on NBCSN at 7:00PM Eastern and heard on your local MRN affiliate.

So glad I swore off these Ego Series farces after last week. I’d rather watch grass grow.

How many laps into the “race” before Kyle orders a Harvey Wallbanger?