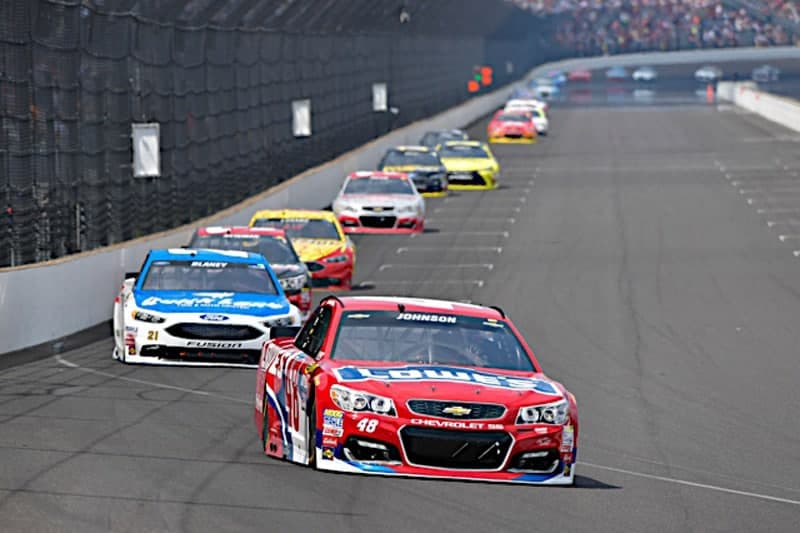 For the first 350 miles on Sunday, it seemed like the Power Rankings were going to be easy to compile. Track position was everything. Few drivers were making their way up through the field, and the laps were quickly ticking down.

The final 20 laps at Indianapolis Motor Speedway saw a myriad of cautions, with Chase hopefuls including Carl Edwards, Ryan Newman and others included in the carnage.

While none of the crashes or subsequent restarts had any effect on the winner of the race – Kyle Busch made sure of that – they did alter the outcome of this week’s rankings.

That said, let’s take a look at them.

“Two straight races where a restart costed him a shot at a top-5 finish. Team Penske is trending upward.” – Dustin Albino, Frontstretch
“Even after getting caught up in that wreck, Keselowski still managed to soldier on to the finish instead of packing it in like Jimmie Johnson and Kyle Busch have done in the past.” – Pete McCole, AutoRacing1

“The No. 20 team finally has some momentum.  Is another late-summer run in the works?” – Bryan Gable, Frontstretch

“Another weekend where Logano didn’t have speed, but somehow worked his way through the field late in the going.” – Joseph Wolkin, Frontstretch

“Didn’t have the car at Indy, but Pocono’s less than a week away.” – Spencer

“Wasn’t the top 10 he was looking for, but KuBu extends his streak of finishes of running on the lead lap this season, which he’s done in every single race this year.” – Kyle Pokrefky, The Fourth Turn

“The gap is much narrower now, but he has still led the most laps this season.” – Gable
“One thing after another continues to bite this team. This week it was a late race restart. ” – Albino

“HE PUT EVERYONE A LAP DOWN BY RUNNING AN EXTRA LAP, RIGHT?” – @AnnoyingRaceFan

“It’s no longer a question if he will compete for the championship, but can he win it?” – Jim Utter, Motorsport.com

“Had my “Backflip Over the Bricks” headline all queued up going into the weekend. Instead, Edwards ended up with a crushed car, and the bricks ended up with crushed Skittles.” – Bearden
“If it wasn’t for a poor restart by Truex, we might have had a JGR sweep of the first four positions. Good thing they dodged THAT bullet – wouldn’t want people to think JGR is blowing everyone’s doors off.” – McCole

Two sneaky top 5s elevated these drivers into Power Rankings contention, but it’s going to take another good run at Pocono Raceway to make the leap.

Kyle Larson (14 Points) – “HE FORGOT HIS TOOTHBRUSH AT HOME. Y’KNOW, THE GIANT ONE HE WON AT ELDORA.” – @AnnoyingRaceFan