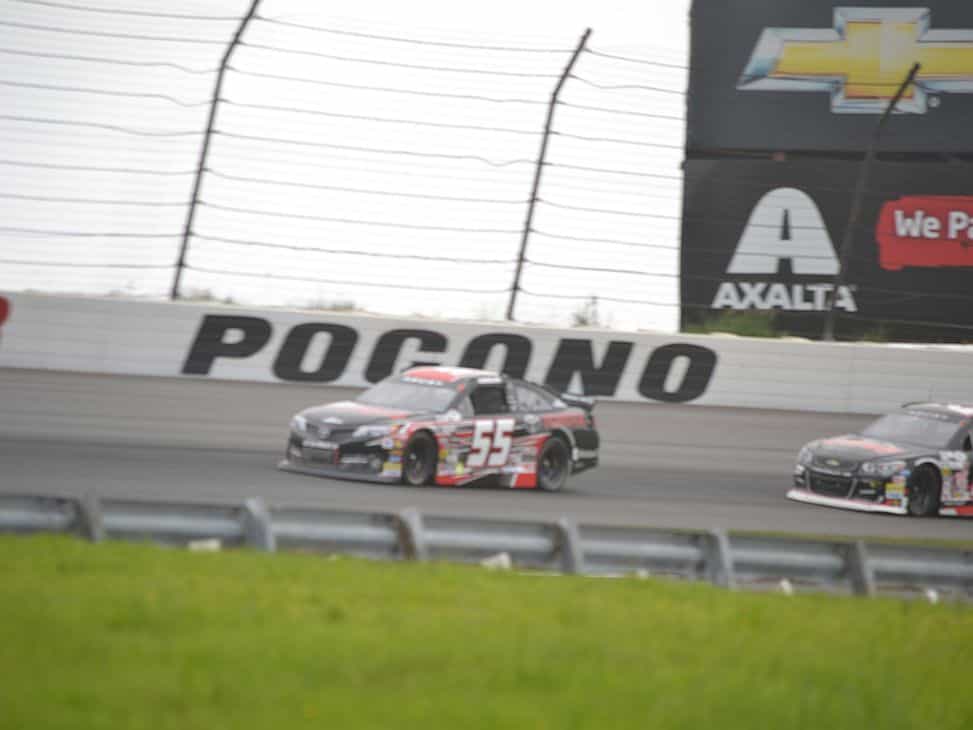 Fans will see the Camping World Truck and Sprint Cup series return to the Tricky Triangle this weekend, and there is certainly no other track on the current slate with such a unique shape.  It’s a true triangle, with three different straightaways and three very different turns. There’s even “What turn 4?” emblazoned on the wall in case anyone wonders what happened to it.  It’s notoriously hard to set up for because what works to make cars handle in one corner doesn’t work in the others, making it a crew chief’s nightmare at times.

The Lady in Black is NASCAR’s original superspeedway, built in an era where most paved tracks, and most tracks, period, were short tracks. The 1.66-mile egg-shaped oval, shaped that way because of a pond on the neighboring property which is visible in the photo, was, when it opened, unlike nothing anyone had ever seen. The track was huge, the race long, the pavement killer on tires.  Winning there gave a driver massive bragging rights. Another nickname, The Track Too Tough to Tame, came about because of how difficult it was to figure out, with a razor-thin line between running the best line with a Darlington stripe to prove it and slamming the wall and coming away with a pancaked right side.

Trenton has long since closed, covered with a UPS hub and a housing development, but from 1969 – 1980, drivers raced the tracks’ third and final configuration, a 1.5-mile dog-leg oval that resembled a large and slightly misshapen kidney bean. Raced by both open wheel and NASCAR series, the track boasts winners such as AJ Foyt, Mario Andretti, Rick Mears, Bobby Allison, David Pearson and Richard Petty. The video shows the track’s last race, a Modified event.

Located in Bucks County, Pennsylvania, Langhorne graced the NASCAR schedule from 1949 – 1957.  The one-mile dirt track, paved in the 1960s, after the NASCAR days, appropriately nicknamed The Big Left Turn, was almost completely round, the turns designated by which quarter of the track drivers were in. The section designated as Turn 2 earned the rather descriptive moniker Puke Hollow, as the surface would become rutted and bumpy throughout the course of a race, making drivers regret their pre-race meals. Like Trenton, the track hosted open-wheelers as well as stock cars, and the winners’ list includes some of the all-time greats: Lee Petty, Fireball Roberts, Tim Flock, AJ Foyt, Mario Andretti and both Al and Bobby Unser among them.

OK, so NASCAR won’t be adding a figure-8 track to the schedule anytime soon. I’m not suggesting that it would be a remotely good idea, but admit it: watching the sport’s biggest stars run an exhibition race like this one would be a fun, unforgettable event. Charity race, anyone?

I went to Trenton in 1977 for the Modified Race of Champions. They moved it to Pocono and I went there for a few years and they raced on the big track and the 3/4 mile on the front stretch. I went to Darlington for the Southern 500 in 1980. They’re some of the 40 tracks I’ve been to and there are a lot more “weird” tracks, like Berlin Raceway that present challenges to drivers.