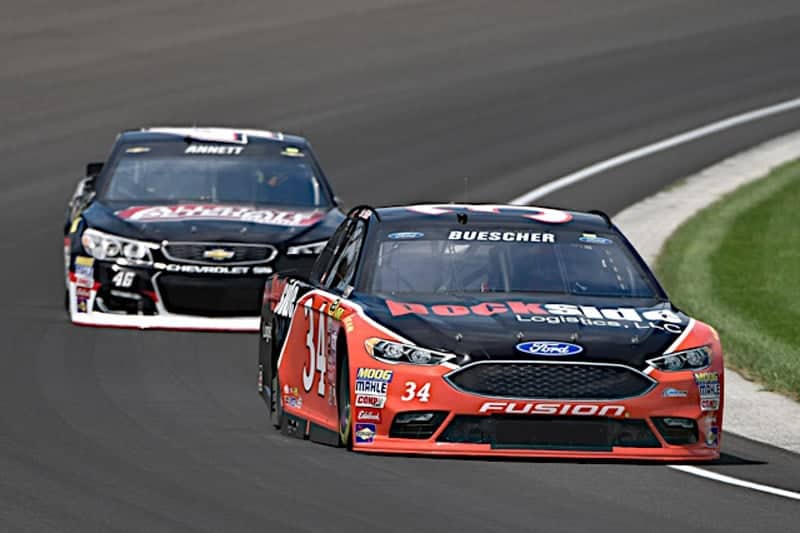 Not because of the race — those have never been particularly compelling at a track steeped in someone else’s history — but because of an impromptu finale between two of the best drivers the sport has ever seen. The victory lap, the embrace, it was two drivers who both know they may never come ‘round this way again and were not about to let that moment slip by.  The extra lap was Tony Stewart’s idea, a final salute to his home track, and he invited Jeff Gordon along for the ride.

The moment was poignant, meaningful amid an otherwise fairly uninteresting race weekend.

We ran a poll on the Frontstretch Twitter account this week that asked fans what makes a race memorable in their estimation.  Most who responded, 68 percent, chose the option of passing throughout the field.  Another 19 percent said it’s all about a close finish.  A few said there has to be lots of passing, but only at the front of the field — in other words, what happens outside the top positions is of little interest.  The last 8 percent said a win by their favorite driver makes the race worthwhile.

Race fans, we want to know…what makes a race a good one?

What made races different (it’s hard now to say better because the fan base has changed so drastically) 20 years ago was the greater mix of drivers running for, say, top-15 finishes.  There were times when it looked as though someone different might win (even though when the race shook out, they most often didn’t).  Now, it’s a lot harder to get drawn into a good or even a great run by someone outside a small group of usual suspects and actually believe that the outcome will be any different.

Does that shift take something away from the NASCAR experience overall?  I think it does.  It must be very wearisome to pull for a driver when there’s little chance that he or she will even have a shot at a top 10, let alone a win.

That’s where fans get frustrated with the Cup drivers in the XFINITY Series as well—it’s not so much that they’re there, but that it feels like there is no chance for anyone different to win a race.  At the end of the day, nobody wants to feel like they knew then ending before they ever opened the book, and that’s how the series reads these days. Several years ago, even when Mark Martin was winning and winning often, there were other winners.  Compare Martin’s winningest season in the XFINITY Series, 1993 (Martin won seven races that year), to 2016. Martin ran 14 of 28 races, winning seven.  The season as a whole saw 13 different winners, only four of whom (Martin, Dale Earnhardt, Bill Elliott and Michael Waltrip) were full-time Cup drivers that year.  Steve Grissom won the points title with two wins at a time when the Cup drivers could accrue points in other series.

Fast forward to 2016 and the story is different.  Through 18 races, the series has had 11 different winners, which is a decent number, but just three of those winners are series regulars.  Seven are Cup regulars and one was in a fill-in role. Kyle Busch already has as many wins as Martin has in ’93, and six of his Cup competitors have each won another.  It’s not so much that one driver is dominating as it is that the regulars have so few chances to shine as the Cup teams have poured money into their Cup drivers’ NXS programs.

Maybe, then, there’s a fifth factor that makes races more interesting: unpredictability, or at least some semblance of it at some point in the race.

Whether at home or at the track, racing has to be fun for fans. Whether that means some different drivers mixing it up, or things to do at the track, it’s about the fun factor.  And while a lot of people eschew the idea that cost is a big factor in the empty seats at the track, it is.  It’s not fun to have to pay upward of $200 a night for the weekend for a cheap motel room.  An overlooked piece of the puzzle may well also be the current corporate environment; people have less vacation time than several years ago, and the expense of a race trip coupled with the lack of time may well lead them on other paths.

Then, too, the huge popularity of NASCAR in the late 1990s and early 2000s was a wave, not permanently deeper waters.  For a while, NASCAR was the cool thing around the office water cooler.  The bandwagon got pretty full with everyone jumping on to check out the buzz.  The buzz died down and the crowds are smaller.  It’s hard to say that a large part of that isn’t that the numbers were over-inflated in the fad days to begin with.

So yes, some fans have left for greener pastures — but a lot of others were always going to.

Common sense told me when I first became a race fan that I wasn’t going to see a close finish every week. It’s too much to ask for. That just makes them better when they do happen. For the longest time as long as a race had a close finish it was considered a great race. Nowadays, even if the finish is close, like this year’s Daytona 500, people complain about the rest of the race being dull. You can’t please everybody. As far as the Xfinity Series goes, that series lost a lot its idenity when they stopped running at places like Hickory, Myrtle Beach, South Boston, Rougemont, and places like that. I know the chances of them returning to those places rank right up there with roosters laying eggs, but the series was much more fun back then. Back when NASCAR went through that popularity surge, I kept telling people it wasn’t going to last, that eventually, some people would move on to whatever the next trendy thing was. Unfortunately I was proven right. I will not be going anywhere. Me without NASCAR would be like Eric Clapton without a guitar.

Use the bodies and engines of the cars of the 1980’s. Sorry Toyota you have to stick with international racing. Bring back Chysle,r Olds, Dodge and Buick.