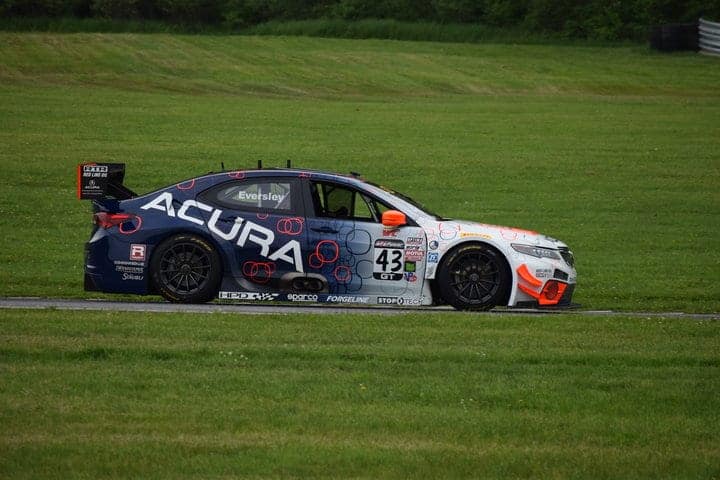 Earlier this week, Pirelli World Challenge competitiors RealTime Racing announced a testing program for the new Acura NSX GT3, which was unveiled to the public at the New York International Auto Show in April.  Veteran Dutch sports car racer Peter Kox has been retained to serve as a test driver for the program.

RealTime Racing owner/driver Peter Cunningham has also elected to pull himself out of the car for the next two race weekends in order to assist with the testing.  As a result, a replacement driver was necessary.

On Thursday morning, the team announced that IMSA regular Spencer Pumpelly will replace Cunningham as Ryan Eversley‘s teammate at Mid-Ohio this weekend and Utah Motorsports Campus (formerly Miller Motorsports Park) in August.  Pumpelly will drive the No. 34 Acura TLX-GT.  Pumpelly will likely be driving the car pictured above from Lime Rock in May (the car pictured above is Cunningham’s car re-numbered to No. 43 after Eversley’s car was heavily damaged in a crash at Canadian Tire Motorsports Park).  Pumpelly will not miss any IMSA races for Change Racing (WeatherTech SportsCar Championship) or Rennsport One (Continental Tire SportsCar Challenge) as neither race weekend clashes with IMSA.

Needless to say, Eversley is very pleased to have his buddy and fellow Atlanta-area native Pumpelly as his teammate.

For Pumpelly, this weekend will mark his season debut in Pirelli World Challenge.  Last year, Pumpelly competed in four races in the GTS class in a Ford Mustang BOSS 302S for DWW Motorsports.  He claimed three podium finishes, including a win in Race No. 2 at St. Petersburg.  Pumpelly’s only appearances in the GT class occurred in 2009 for TRG.  Driving a Mercedes SLR 722 GT, Pumpelly started two races with a best finish of tenth at Road America.

As for the new NSX GT3, the plan currently is for the car not to race for the rest of the season.  However, it will take part in testing and practice sessions at each track, the first of which of was Thursday at Mid-Ohio Sports Car Course.  The NSX GT3 will ultimately replace the TLX-GT for 2016, marking the potential end of World Challenge-specific cars in Pirelli World Challenge’s GT class.  An official announcement on the full plans for the Acura NSX GT3 will be made at a later date.