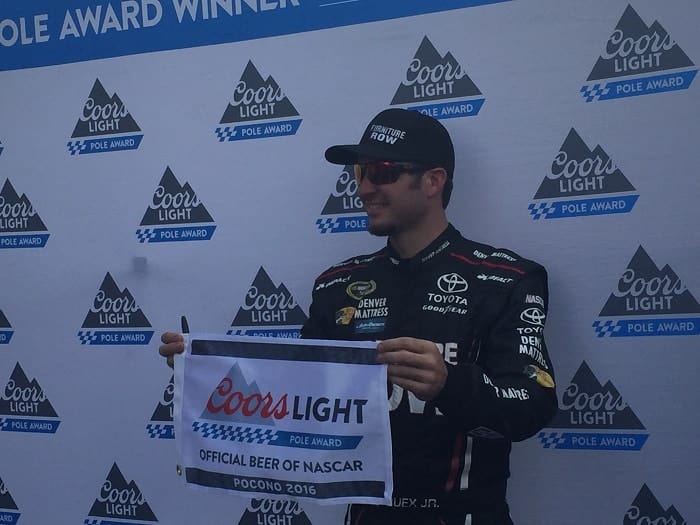 For the second time in his NASCAR Sprint Cup Series career, Martin Truex, Jr. will lead the field to the green flag three times in one season.

Piloting the No. 78 Toyota, Truex topped the charts in the final round of qualifying for the Pennsylvania 400 at Pocono Raceway at 50.211 seconds (179.244 mph), his first pole award at the 2.5-mile track in his 22nd start. He has multiple poles for the first time since 2009, when he was driving for what was then known as Earnhardt Ganassi Racing.

For Furniture Row Racing, the pole is the fourth in team history. As Truex eluded to during his post-race press conference, he is using the same car from Charlotte Motor Speedway, where he led a race-record 392 laps.

Qualifying was postponed for approximately 20 minutes after there was a glitch at the start of inspection with the laser platform, according to NASCAR Senior Vice President of Competition Scott Miller.

Kyle Busch was the final car to clear inspection, taking until approximately seven minutes left in Round 1 to get his vehicle onto pit road. However, once he got on track, the No. 18 car placed in the fifth position in Round 1. He qualified 16th, missing the cutoff for the final round of qualifying.

Paul Menard started the week with a crew chief change, with Jason Alexander no longer atop the pit box for the No. 27 car. With Danny Stockman taking charge, the team was quickest during Friday’s first practice session.

The speed evidently carried over to qualifying, with Menard qualifying third at Pocono, a track where he has two top 10s in 19 starts. For the first time since Martinsville, he will start in the top 5.

“We had a good car at Indy last week and it took us a little bit to get it sorted out because it was a new car,” Menard said after qualifying. “It wasn’t quite right last week, but we hit on some things for the race and got a top 10 out of it. We brought that car here, and we’re excited about it.

“We unloaded in qualifying trim and worked hard on qualifying. We feel like we really lacked there last year. When you start up front on Sunday, it just makes your day start off way smoother. We’ll get a good pit stall, and we have practice tomorrow, so we’ll work on some race stuff.”

Jeff Gordon, driving the No. 88 car for the second straight weekend, was forced to take a second lap in Round 1 after being on the bubble of missing the cutoff. He will start 24th after missing the final round of qualifying at Pocono.

Three of the four Hendrick Motorsports cars will start 21st or worse on Sunday. Rookie Chase Elliott was the only one of the team’s drivers to advance to the final round of qualifying, ending the afternoon in eighth.

In his final start at Pocono, Tony Stewart qualified sixth in the No. 14 car. As he walked out of his car after qualifying, he was all smiles after earning his second straight top-10 start.

The green flag for the Pennsylvania 400 is scheduled for 1:30 p.m. ET on Sunday afternoon.

Click here for the starting lineup for the Pennsylvania 400.