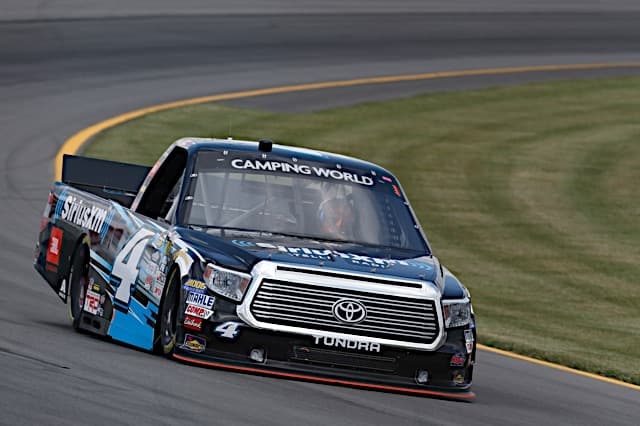 From five laps down to finishing in the top 10, rookie Christopher Bell set the bar for an unlikely NASCAR Camping World Truck Series record on Saturday afternoon during the Pocono Mountains 150.

With five free passes, Bell took advantage of Saturday’s eight caution flags, the most since the Truck Series began visiting Pocono Raceway in 2010. For the Kyle Busch Motorsports driver, the result was one that shocked him, given he had to start at the rear of the field due to unapproved adjustments in between qualifying and the race.

“We had an alternator go bad when we fired the truck up,” Bell said following the race. “Luckily, my guys are smart enough and knew what they were doing. We came down pit road and they fixed it, and it’s just a shame because we had a really fast SiriusXM truck today.”

Giving up the track position Bell earned from qualifying fifth, he went straight to the rear of the field.

John Wes Townley, returning from a two-race hiatus due to concussion-like symptoms, was on the inside of Bell on Lap 17. The two were battling just outside of the top 10 when the No. 05 truck drove into the corner too hard, slamming into the left side of Bell’s truck, shoving him into the wall.

After extensive repairs, Bell went five laps down. But a plethora of cautions following the incident kept over 20 trucks on the lead lap, with the No. 4 being one of three trucks multiple laps down.

“We were back there in 20-plus, and then to come back with a top 10 made it a big day,” Bell said with a look of shock on his face. “It just seemed like after every yellow, we just kept getting more yellows. It really helped us, especially after we crashed.”

The top 10 gives Bell eight on the year, one more than teammate and championship leader William Byron, who won his fifth race of the season on Saturday. He currently sits sixth in the standings, 17 points ahead of Cameron Hayley and Ben Kennedy, who are tied for the eighth and final Chase position.