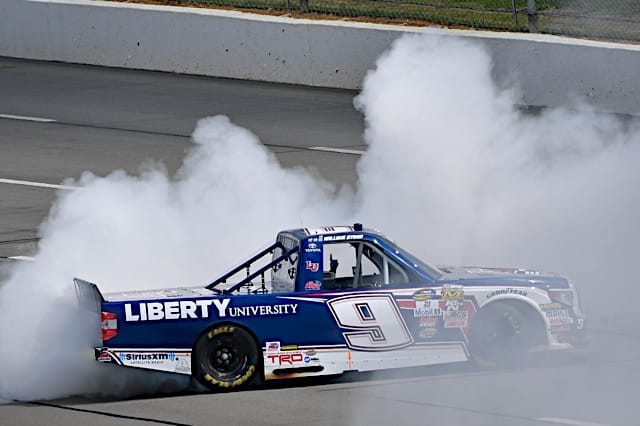 In a Nutshell: William Byron owned Pocono Raceway throughout the weekend. Come Saturday’s Pocono Mountains 150, the No. 9 truck, deemed the one to beat by his competitors, set the pace. Holding off Cameron Hayley on a restart with four laps remaining in the race, Byron earned his fifth triumph of the season, a Truck Series record for a rookie driver. Brett Moffitt, Timothy Peters and Cole Custer rounded out the top 5.

Who Should Have Won: The racing gods got this one right. William Byron, the 18-year-old Kyle Busch Motorsports rookie, was as bright as his Liberty University colors, as he led 44 of 60 laps on Saturday. Showing little signs of weakness, battling treacherous restarts, fuel concerns and a threat of rain in the forecast, Byron and the No. 9 Toyota team made it no mystery why they hold a solid point lead exiting the Tricky Triangle.

The Chase is approaching rapidly for the Truck Series, and the battle to make it into the division’s first playoff battle is intensifying.

Entering Pocono Raceway, Brad Keselowski Racing teammates Daniel Hemric and Tyler Reddick were each inside of the top 8 in the standings. However, the Tricky Triangle proved to be one quite difficult for Hemric, a former Late Model standout.

Turn 1 was treacherous throughout the 150-mile contest on Saturday, and Hemric became one of many victims to lose control in the midst of the first corner. His No. 19 truck, which entered the day day third in the standings, got loose on Lap 29. As he attempted to save his truck, he skidded up the racetrack, slamming into Reddick, putting an end to any chance either driver had at competing for a win.

Hemric was able to return to the racetrack, finishing on the lead lap in 22nd. But for Reddick, the result was devastating and one that could have ruined his shot at making the Chase.

Reddick now sits 10th in the standings after recording his second DNF of the season. Sitting one point behind Hayley and Kennedy for the final Chase spot, he is not out of contention yet. However, with three races left before the cutoff, the No. 29 team needs to get the most out of each of the remaining events.

Though it may not reach the uncertainty of Daytona or Talladega, Saturday’s Pocono Mountains 150 was an overall solid day for many smaller teams in the Camping World Truck Series, who avoided trouble to grab top-20 finishes.

Though it was a tough afternoon at the Tricky Triangle for a number of top competitors, it proved to include high marks for the small side of the garage.

No. 22 Austin Wayne Self

Up Next: It’s back to a mid-week thriller for the Camping World Trucks as the UNOH 200 from Bristol Motor Speedway kicks off on FS1 and MRN on the night of Wednesday, Aug. 3.

Zach Catanzareti contributed to this story.