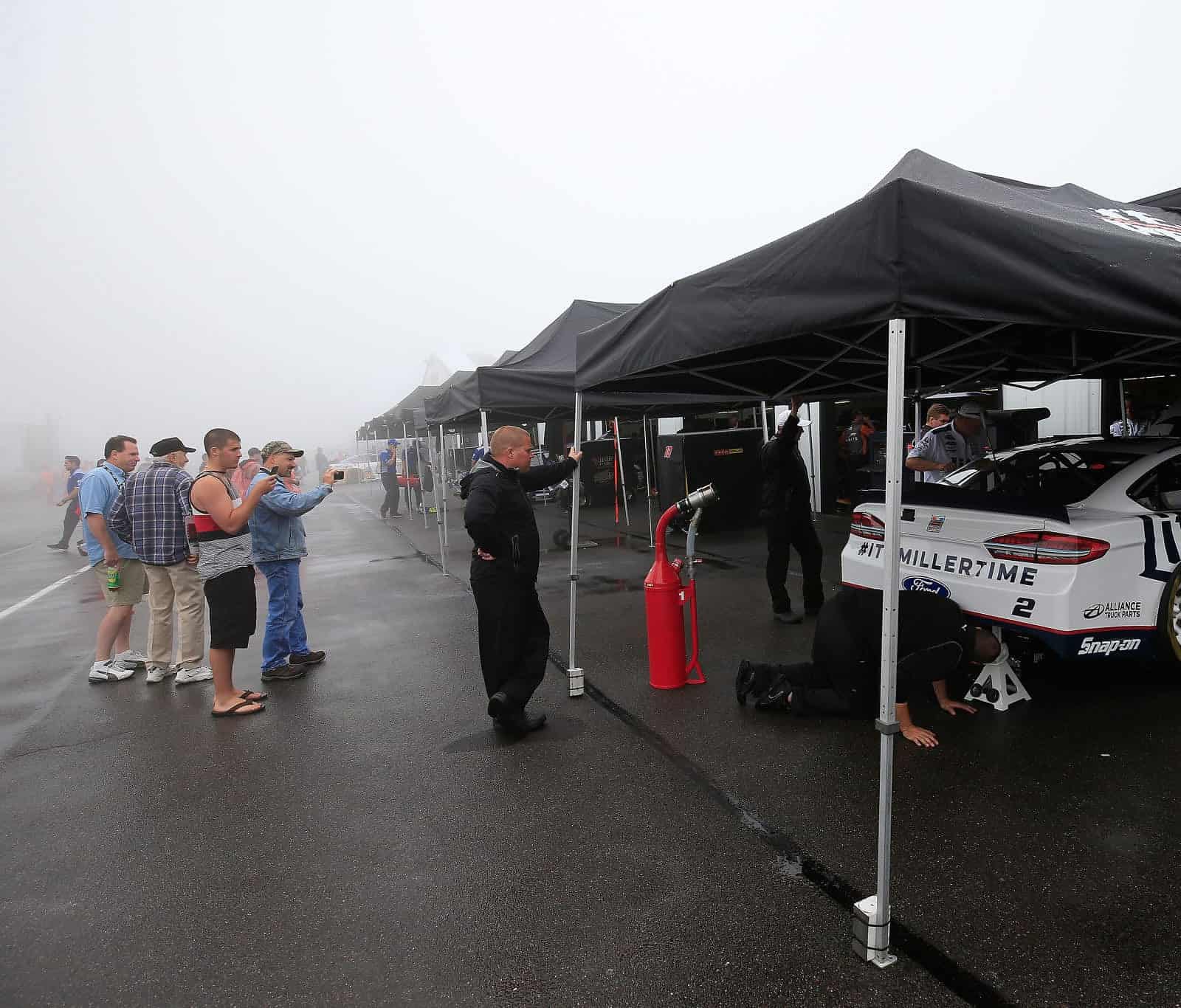 For this first time in NASCAR history, two races at a single track in the same year have been postponed to the next day (in this case, Monday) because of weather. Perhaps one of the most rain-prone tracks on the schedule, both of Pocono Raceway’s Sunday races will be run on Monday.

Or at least we hope.

Pocono’s first race this season in June was postponed to Monday because of rain. Kurt Busch eventually won. On Sunday, Pocono’s second race of the year, heavy rain and problems with weepers forced NASCAR to move the race to Monday, August 1.

While this race will only be the second run on Monday this season, it will be the second time for Pocono in the same year. The Tricky Triangle isn’t the only track that has been plagued by rain the past few seasons, but the Pennsylvania racetrack certainly has earned a reputation for dealing with inclement weather.

So what can be done about it?

NASCAR’s options are limited. One of the larger problems on Sunday was the issue of weepers coming up through the asphalt, making it nearly impossible for track workers to keep the track dry. Kentucky Speedway recently underwent some major innovations, one of which included a complex drainage system that helped tremendously to dry the track when they ran into their own weather problems earlier this season. Perhaps Pocono needs to look into something similar.

Additionally, Monday afternoon races are such a huge negative not just for the racetrack, but for NASCAR as a whole. While TV ratings haven’t always created positive headlines for NASCAR in general, they are obviously much lower when the race gets delayed or postponed.

However, NASCAR can’t control the weather, and while the Air Titan system certainly helps dry tracks faster, the weepers are a problem of their own and the Air Titans can’t do their job until the weather has already moved through the area. Both were problems this weekend in Pocono.

So what else can be done?

Unfortunately, Pocono doesn’t have much of a dry season. Rain in the area – like many locations in the country – is difficult to predict and can range anywhere from a light, persistent mist to a constant downpour. That’s why many thought that qualifying would be rained out on Friday and the race on Sunday would run its course … when it ended up being the opposite. Both of Pocono’s races are in the middle of summer. It’s hard to imagine that NASCAR could move either race to any other time of the year would there would be less of a chance of rain.

The one option that I’m hoping this racetrack will explore is adding lights. Yes, it’s an expensive undertaking just for the sake of weather, but it would have provided some additional time for NASCAR to work on the track and for rain to move out of the area. Sure, it may still not have worked out very well. The cooler temperatures and night would have made the track more difficult to dry had the rain and moisture persisted, but it would have been nice to have had the option if the opportunity had presented itself.

However, lights would also assist in a problem that may come up on Monday: more rain.

The forecast isn’t any more promising for Monday either. An 80 percent chance of rain means that Pocono could run into the exact same problem as they did Sunday and has limited daylight hours. If the track had lights and if the rain persisted, they could potentially still push the race into primetime and maintain somewhat of an audience.

Again though, all of this is dependent upon if the rain actually stops. Weepers or no weepers, that’s a big part of the problem. Even if weepers hadn’t been a problem on Sunday, the race likely would have still been postponed because rain continued to move through the area.

The bottom line is that, while there may be some fairly reasonable options to try in the future, NASCAR isn’t in the business of disappointing its fans and creating a logistical nightmare for the teams. Remember, NASCAR has expenses to pay too, and a Monday race means more money that the sanctioning body has to spend as well – and usually with a watered down at-track and television audience. This is already a problem the sport’s leaders are wanting to address but still have only a short list of things they can do before eventually they have to do…well, exactly what they did.

Pocono set the kind of record this season that no track ever wants to set. But rain isn’t something that anyone can prevent. You can put as many plans in place as you want, but the rain still has to stop at some point before any action can be taken.

Hopefully, the next time around, it stops long enough for the cars to at least take the green flag.

Here’s an idea. Schedule the race to start at 10AM. This widens the window for getting the race in. While it wouldn’t have helped yesterday, most of the time the thunder storms develop in the heat of the day in the afternoon. I doubt a Sunday morning race would have lower ratings than a Monday afternoon race and it would be better for those attending the race (many of those people will not be able to attend on Monday).

Yes. That’s something I’ve never understood. Golf does it rather frequently if there is a threat of bad weather later in the day.
The most heavy lifting NASCAR does is to move the start of a race up 6 minutes.
Get ready for more of this with the later start times for a lot of races next year.

Never mind golf. F1 and Indy run at all kinds of weird times and it’s just part of the deal with where the races are held. 10AM doesn’t seem that early compared to some of the F1 start times.

Still drying the track. Nowhere close yet. Lots of interviews.

The cars are rolling off. The Kyle Busch Show is about to begin!

NASCAR has it all figured out by moving the start times to 2 and 3 o’clock. That way, one good shower and it is done…..