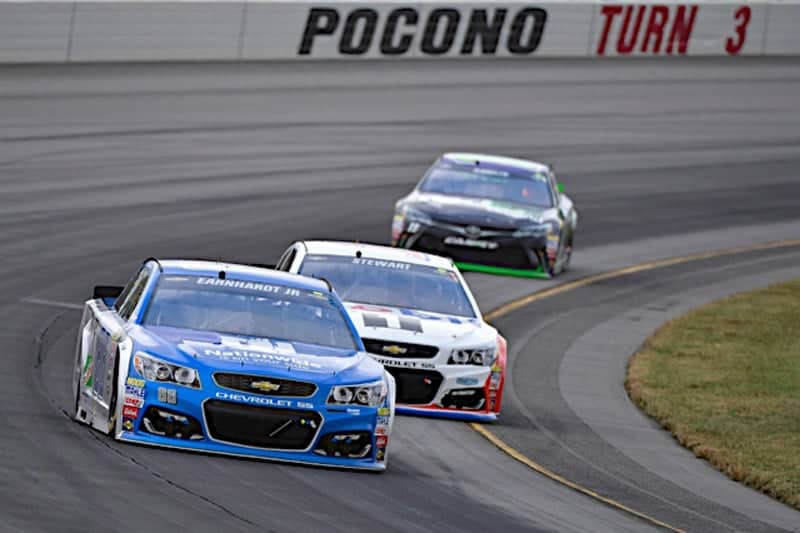 Supposedly it’s the middle of summer, but if you were fortunate enough to spend a lot of time at Pocono Raceway on Sunday and then again on Monday, it would have been easy to think that summer days and summer nights were gone. Monday turned into one of those “if you don’t like the weather, wait a minute and it will change” days. Being lucky enough to attend both days (well, it was not so lucky Sunday), the fog that rolled in and eventually helped end the race Monday was unlike anything I have seen in all of my decades of attending various auto racing events. The fog eventually got so thick, you couldn’t even spy the land and by that I mean the first turn and the backstretch and I was sitting at the end of the grandstands on the frontstretch, closest to the first turn. And yes, the weather helped play a role in the many twists and turns in the Pocono mountains.

HOT
Any betting man would have said the first rookie to win this year was either going to be Chase Elliott or Ryan Blaney. And well, this is why you shouldn’t bet. Rookie Chris Buescher took that honor Monday at Pocono to earn his first career Sprint Cup win. Give some credit to veteran crew chief Bob Osborne who has experienced plenty of weather issues at Pocono during his career for keeping a constant eye on the radar and the on the real weather at the track. Sure, there is a little luck involved in this win, but Buescher and Osborne don’t have to give it back and really, no one can blame them. While Buescher now has the coveted win to make the Chase, he is still six points out of 30th place in order to qualify for NASCAR’s playoffs. So, he will have his work cut out for him in these last five races and it will make the whole Chase scenario all that more interesting.

NOT
The weather on Sunday put a damper on what could have been a great day for Pocono. The crowd there appeared to be one of the largest they have had in years with very few empty seats. Getting out of the parking lot there reminded me of the days when sellouts or near sellouts was the standard at NASCAR races. Pocono also now has the unfortunate honor of being the first track to have both of its races this year pushed back to Monday because of the weather.

HOT
The weather played such a role in what happened Monday, it was not like anything that most veteran auto racing fans have seen. While the fog flirted with the backstretch at times during the race, it finally overtook the backstretch and turn 1 so much, that it forced NASCAR to throw the yellow flag. It was impossible for spotters to see the cars. And while Kyle Busch thought it would have been OK to keep racing, NASCAR did the right thing by thinking safety first. The fog added such a unique element to this event, NASCAR’s version of the Fog Bowl is something that will be remembered by everyone who was there.

NOT
Almost as crazy as Chris Buescher winning a race are the recent finishes of the Hendrick Motorsports cars. In the seven races since the Sprint Cup series last visited Pocono in early June, the four Hendrick cars have combined for a total of three top 10 finishes (Kasey Kahne ninth at Sonoma, Jimmie Johnson third at Indianapolis and Chase Elliott second at Michigan). For a team that has at times been accustomed to getting three of the top four or five finishers, or four of the top seven or eight, in races, this stretch has been remarkably unremarkable. It’s certainly one of the most surprising stories of 2016. But even though after Monday’s race with Johnson, Elliott and Kahne all in the Chase, it’s certainly not the direction any team wants to be going this late in the season.

HOT
One of the cool things about going to a race at Pocono is that drivers walk through a gated-off area to get to driver introductions where autograph seeking fans are lined up. Many of the drivers sign autographs as they walk through and it’s nice for fans, both young and old, to get an up-close glimpse of the drivers that they can usually only see from a distance in their cars or on TV. So, as a fan who was there with his son, thanks to all of the drivers who took a couple of extra minutes to stop and sign autographs. It means a lot.

NOT
Now for the downside of the autograph line, there were some drivers who walked through that gated area without stopping. Specifically Kevin Harvick, Ryan Newman, Carl Edwards and Kurt Busch are ones that I personally saw (there may have been a couple of more) who didn’t stop to sign for anyone. So, if you aren’t going to sign, then walk through the other gate where the cars are pushed to pit lane where drivers aren’t expected to sign. It’s bit mean to get a young fan’s hopes up, only to see them dashed when their driver dashes through the autograph line without signing for anyone. I understand drivers have a lot commitments during a weekend and they can’t stop and sign for everyone in line, but unless they are going to be late for driver introductions, then another couple of minutes with the paying public is time well spent.

Predictions
This week the Sprint Cup series heads to the second road race of the season in Watkins Glen. I’m going to go say the Chase scenario is going to get even crazier after this one by picking AJ Allmendinger, who is currently 21st in points, to win this one. The deep sleeper underdog who you might not think about pick this week is the last of the road course ringers (at least in Sprint Cup) in Boris Said. Go ahead Said Heads, celebrate at least one more appearance by your favorite driver.

Drivers ought to take a lesson on fan appreciation from King Richard. He was always quick to make a fan happy by signing memorabilia or posing for a picture with a fan. My guess is that he still does. Kyle Petty learned that lessn from his father as well. I have tremendous respect for the Pettys, not so much for many of today’s drivers.