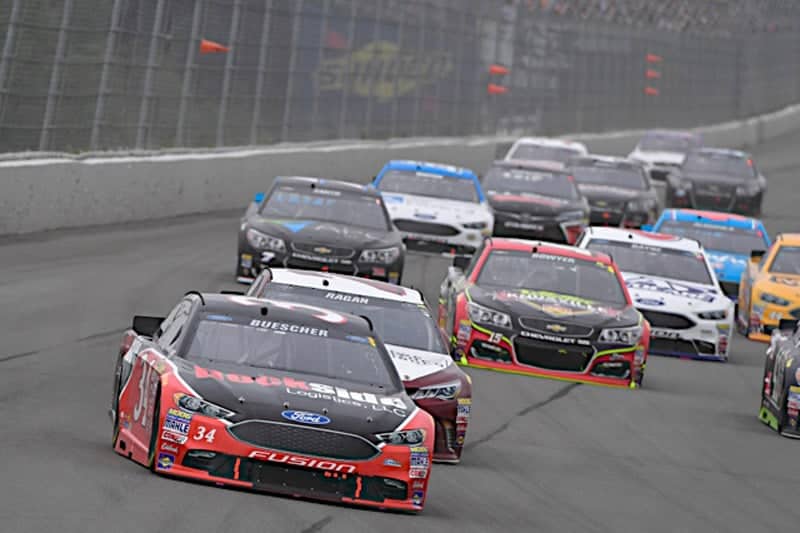 If there’s one thing that can be said for certain about Monday’s postponed running of the Pennsylvania 400, it’s that no race in NASCAR’s history was quite like it.

First, there was the fact that it was the first time a track had suffered two postponed races in the same year. Then, there was the rarest of reasons for a race to end: fog. Throw in an underdog winner in Chris Buescher and poor outings for a few Chase hopefuls, and finding takeaways from the wild weekend that was proved difficult at best.

Picking the top 10 after Pocono Raceway’s second race wasn’t easy, and a few of our typical crew couldn’t participate as they traveled home or looked to catch up, but the majority of the experts did their best to peek through the fog and pick the top dogs after a trip through some Pennsylvania mountains.

“If the race had gone back green, Buescher was dead meat and he knew it. Keselowski could smell blood in the water, but the rain washed it all away.” – Pete McCole, AutoRacing1.com
“Won at Pocono in 2011 after suffering a vicious testing crash on a road course. Fell one spot short of repeating the act in 2016.” – Aaron Bearden, Frontstretch

“The guy sponsored by an energy drink just set a record for most races completed in their entirety to start the season. Anyone else smell a marketing opportunity? – Bearden

“It’s been a while since we’ve seen a backflip. Can Edwards right the ship with his second road-course win?” – Bearden

“Probably had the second best car on track, but fell foul of the Tunnel Turn. It happens to the best of them. One false move and you’re in the SAFER Barrier.” – Allaway
“He’s ranked higher here than he is on the 2016 fan apparel list, that’s for sure.” – Turnbull

“Larson is finally showing some strength. It’s about time. With Chris Buescher winning, he needs it because its going to be that much harder now to get into the Chase.” – Allaway
“A win has to be right around the corner. He’s starting to look a lot like the 2014 season while leading laps and posting good finishes.” – Albino

“Looked strong early but once he fell back, he seemed to not be able to make up any ground, then got bit when the fog rolled in. Could have been a top-10 finish if the race had gone the distance.” – McCole
“Slow and steady, slow and steady. Granted, finishing 17th isn’t much to write home about, but the No. 20 team is getting there.  They’re winning again very soon.” – Allaway

These two drivers both showed speed and promise at one point or another, but circumstances kept them from getting the finishes they should’ve earned. A solid run at Watkins Glen International would help either’s top 10 hopes seem a little less foggy.

Denny Hamlin (12 Points) – “Running better lately, but winning the Daytona 500 still erased a lot of potential Chase worries for the No. 11 team.” – Gable