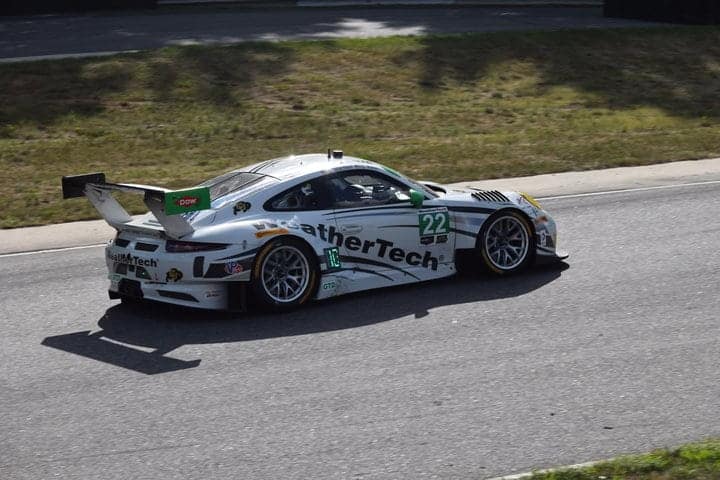 On Thursday, Alex Job Racing announced that Leh Keen has been released from the team, effective immediately.  Sven Müller, a Porsche Junior factory driver, will replace Keen in the No. 22 Porsche GT3-R in the GT Daytona for at least this weekend’s Continental Tire Road Race Showcase at Road America.  Müller will partner up with Cooper MacNeil.

Team owner Alex Job indicated that he was generally satisfied with Keen’s performance on the track, but indicated that an undisclosed off-track issue led to Thursday’s move.

“Leh Keen has won races with us, but off the track circumstances led to a change,” Job said in a press release.  “We wish [Keen] all the best going forward. Sven [Müller] is a fast young driver that is currently leading both the Supercup and Carrera Cup series in Europe. We are looking forward to having a successful weekend of racing at Road America. We will reassess where we are with the 22 Porsche after this weekend.”

Müller is very happy to have the opportunity to race the No. 22 this weekend.

“It is going to be a real pleasure to drive with Alex Job Racing,” Müller stated on Thursday in a release.  “I already know Mario Farnbacher and Alex Riberas from racing in Europe. To have a good strong teammate like Cooper [MacNeil] makes this weekend even more interesting. I have been learning the Road America circuit on the simulator and I am looking forward to driving it tomorrow.”

Müller has only one previous start in the IMSA WeatherTech SportsCar Championship.  That start came back in January at the Rolex 24 at Daytona.  Müller was part of the Frikadelli Racing Porsche effort that finished 12th in GT Daytona.

Thursday’s move ends a relationship between Keen and AJR that dates back to 2010 in the American Le Mans Series.  In 2010, Keen co-drove the winning GTC-class entry at the Mobil 1 12 Hours of Sebring in his first start with the team.  At the beginning of 2012, AJR paired Keen with MacNeil.  That year, the pair won two races (Lime Rock and VIR) and earned three poles on the way to second in the GTC class.  2013 was spent splitting time between a partial schedule in the Alex Job Racing/Boardwalk Ferrari entry in ALMS and multiple teams in Grand-Am (he started the year with Brumos Racing, then switched to Muehlner Motorsports America, AIM Autosport and Scuderia Corsa to finish off the year after Brumos Racing folded mid-season).