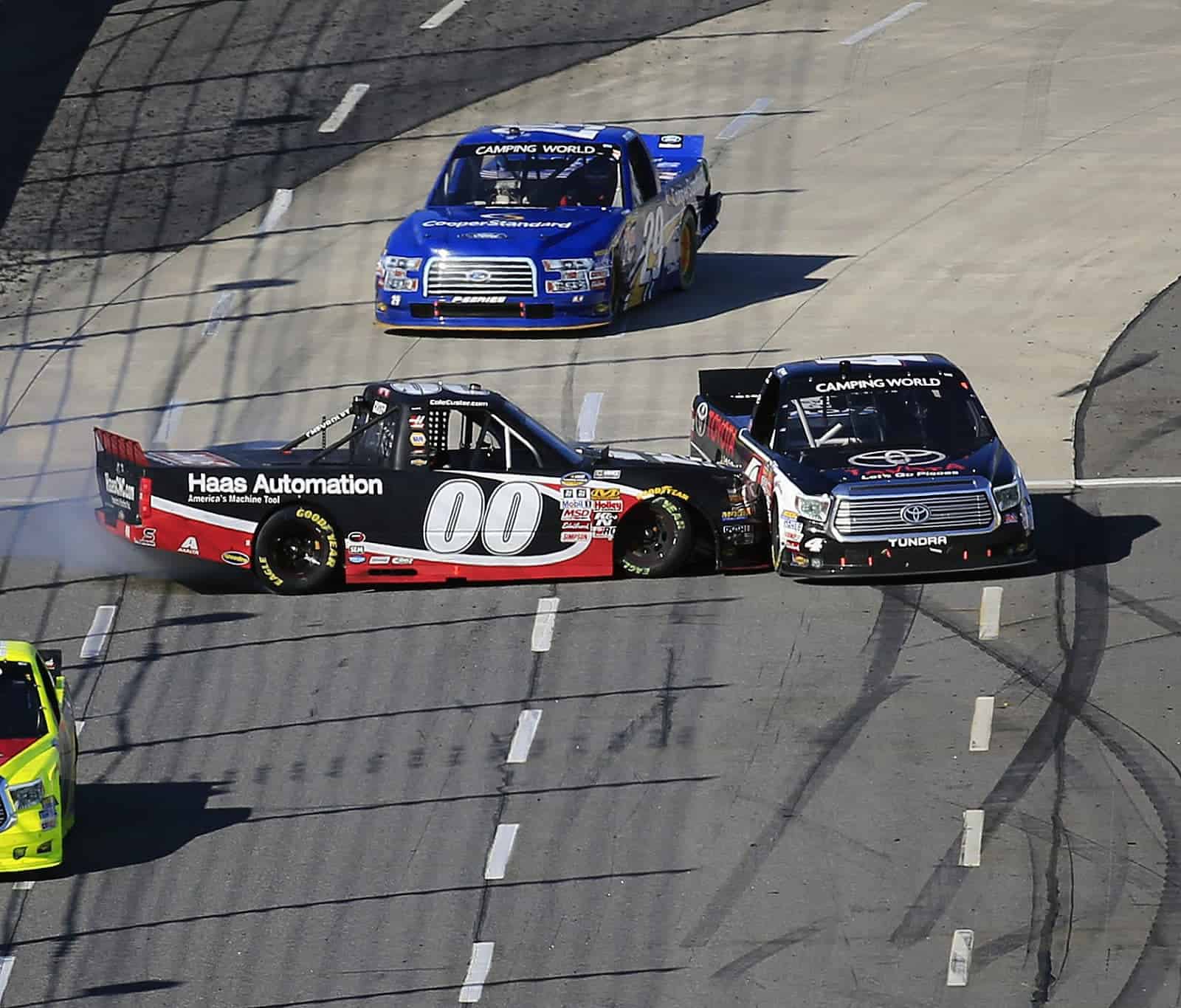 NASCAR has made so many safety advances that it’s easy to get complacent and forget that the sport is still inherently dangerous. Despite everything the sanctioning body has done, there’s no way to make the sport 100 percent safe, short of maybe ending it altogether, and we all know that’s not going to happen, nor would I want it to. Dale Earnhardt, Jr. being sidelined with concussion-like symptoms is a stark reminder that no one is immune, and potential injuries can range all across the board.

During the 2010 running of the North Carolina Education Lottery 200 in May, Brent Raymer’s truck burst into flames for no apparent reason, leaving the young driver to scramble out of his truck in a hurry. With no visible reason why the fire started, the SPEED broadcast crew speculated a broken fuel line. Though the flames engulfed the entire engine compartment along with the cockpit, Raymer was alright, though visibly shaken.

Financially, however, Raymer took a huge hit in his attempt to string together a series of good finishes on limited funding. He lost two trucks and a motor – the majority of his available equipment – in a single day, already running on a shoestring budget with his self-owned team. Though he finished out the season, Raymer was forced to start-and-park through many of the remaining races and was unable to make a single start in his own equipment following the 2012 season. He hasn’t raced in the Truck Series since a lone event in 2012 at Texas Motor Speedway.

Take this terrifying wreck that Geoffrey Bodine rode in – and survived with surprisingly minimal injuries – about midway through the 2000 Daytona 250. According to the ESPN story from the incident (https://espn.go.com/auto/nascar/daytona00/s/2000/0218/365121.html), a total of 11 trucks were involved, and “the force of the crash tore about 50 feet of wire mesh away from steel support poles, several of which were also snapped off.”

Bodine never ran full time in NASCAR again after the accident, though he did make several starts across the Truck, Nationwide and Cup Series. In 2012, the oldest of three Bodine brothers officially announced his retirement from the sport, citing his desire to spend more time with his family. Away from the track, Geoffrey is co-owner of the Bo-Dyn Bobsled Company that was created in 1992. Bodine has worked to create winning bobsleds for Team USA, and according to the company’s website, he found his goal realized in 2002 when the women’s team won the gold and the men won silver and bronze.

Any time a car or truck goes head on into the wall, it’s terrifying. Because, despite the safety advances, injuries (or worse) can still happen. And that’s exactly how it went when Tyler Reddick got loose and slid down the track, collecting Austin Theriault, whose truck turned head on into the outside wall at Las Vegas Motor Speedway late last season. As if the impact wasn’t enough to make you cringe, perhaps the more terrifying part was seeing Theriault just hunched over the steering wheel as his truck rolled down the banking before coming to a stop.

The impact, which happened to be with one of the areas that was not protected by a SAFER barrier (author’s note: the track has since replaced that wall with a SAFER barrier), was enough to break a portion of his HANS device. And because of that break, Theriault’s helmet slammed into the steering wheel, breaking the front of the helmet and bending the steering wheel. The resulting compression fracture, among other injuries, kept him out of the truck until the season finale at Homestead-Miami Speedway.

But based on the accounts of the crash and the damage that followed, sitting out a handful of races was a lot better than the alternative. It’s highly likely that, had the incident happened even five years earlier, Theriault would no longer be here to talk about it.

For this one, we reach all the way back to the 2005 O’Reilly 250 at Kansas Speedway. With just a handful of laps remaining, Chris Fontaine, who was driving the No. 4 Dodge for the now defunct Bobby Hamilton Racing, got loose and slid up the track. As he rolled back down the banking, Kelly Sutton, who appeared to lose control of her truck attempting to avoid the wreck ahead of her, came along and slammed into the left front of Fontaine. The contact sent Sutton’s No. 02 on its roof before it slid into the outside wall and back down the banking, before righting itself on the apron.

Sliding down the track in a wrecked vehicle, which likely doesn’t have its brakes or steering working properly has to be one of the most helpless positions for a driver to be in. Essentially, they’re at the mercy of every other competitor and their spotters as drivers navigate past the wreck. Sadly, Sutton’s flip wasn’t the only one that season as Chad Chaffin and Rick Crawford both flipped in separate incidents at Daytona.

In a case of Daytona drafting gone wrong, Miguel Paludo, who raced full time in the Truck Series from 2011 through 2013, spun full speed into the inside wall. The impact was enough to make the SAFER barrier flex and sent the No. 32 truck into an airborne spin, while his radiator, sheet metal and other parts, propelled across the track. Thanfully, Paludo, who now races in the Porsche GT3 Series in Brazil, was able to walk away, though he was sore for several days following the wreck.