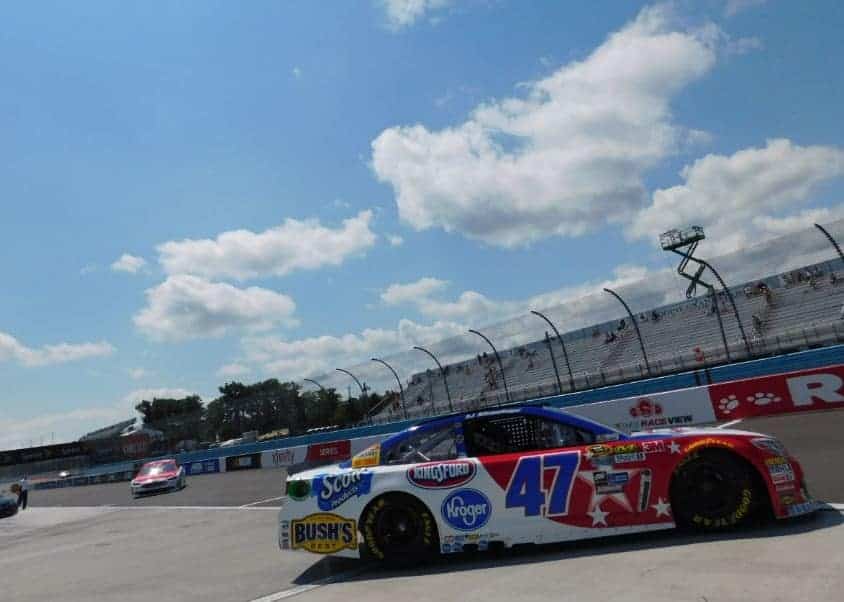 After struggling in the opening practice session, AJ Allmendinger found himself on top of the leaderboard for the final practice at Watkins Glen International, with a speed of 127.551 mph, .038 mph faster than Martin Truex, Jr. (127.481 mph) who paced the first practice.

Final practice wasn’t all fine and dandy for the No. 47 team, however. Though he put up a lap late in the session that was good enough for the top spot, an oil line came loose early on, causing quite a bit of smoke and a bunch of oil to spill from underneath of his machine.

The JTG-Daugherty Racing team was able to fix that problem, turning 14 laps in the session.

As time expired, Ricky Stenhouse, Jr. put his Ford third on the board at 127.416 mph. His best finish at Watkins Glen came in his rookie season when he posted an 18th-place finish.

A pair of Joe Gibbs Racing teammates rounded out the top five. Kyle Busch was fourth (127.381 mph), while Matt Kenseth finished out the session in fifth (127.280 mph).

Brad Keselowski was the first driver outside the top five in sixth. Michael McDowell jumped from 20th to seventh in the final practice. Chase Elliott, Jeff Gordon and Carl Edwards fulfilled the rest of the top 10.

Defending race winner Joey Logano was 14th on speed, over four-tenths off Allmendinger’s time. In his last practice at Watkins Glen, Tony Stewart was 15th.

Casey Mears fell down to 18th on the board after recording the third best lap in opening practice. Drivers such as Jimmie Johnson and Kasey Kahne were mired down in the mid-20s.

Busch was the fastest of the eight drivers that posted a 10-lap run at 124.854 mph, which is over a second and a half slower than his best single lap speed. The No. 18 car and Alex Kennedy ran 27 laps, the most of all drivers in final practice.

Qualifying is slated to go on at 12:15 p.m. ET, where Allmendinger is the defending pole winner.