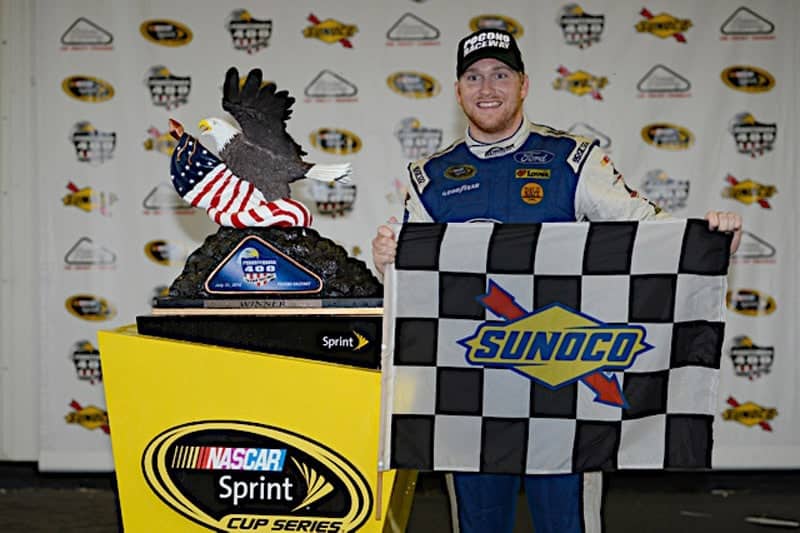 Four days following Chris Buescher‘s rain-shortened victory at Pocono Raceway, he took to the twist and turns of Watkins Glen International for the first laps since his triumph on Monday.

Leading 12 laps at Pocono, the only laps the No. 34 car has been out front this season, Buescher upset a lot of teams chances of making the Chase. He became the Cinderella story of 2016, similar to when AJ Allmendinger won at Watkins Glen in 2014.

But for Buescher, there was no time to celebrate as he flew with some of his Ford teammates to Utah to test for the road course this weekend with world renowned road racer Billy Johnson. Sitting six points behind the 30th-place cutoff, the victory has yet to sink in for Front Row Motorsports.

“I don’t think it has yet just because of how busy we’ve stayed,” Buescher said of the race not feeling real yet. “I really haven’t had time yet to relax and settle in yet. I really haven’t been able to go see any of my friends that would usually be talking about it and be pumped up about it. It’s been from one outing to the next and all about being better for the Glen this weekend.”

Prior to Pocono, Buescher and his Front Row Motorsports team set a previous career-high finish of 14th at Indianapolis Motor Speedway the week prior. The first rookie to win a race since Joey Logano did so in 2009, the No. 34 team has jumped from 33rd to 31st in the standings in the last two weeks.

The turnaround started at Kentucky, when Buescher had a top-20 run going before he was caught up in a mid-race incident. Over the course of the weekend, he sat as high as 14th in practice, the highest he had sat in a session this season. Though a win is always the goal, it came as a bit of a surprise for the organization.

While Buescher was out testing for the road course, the team was working as late as 10:30 p.m. during the week to prepare for Watkins Glen. For the 23-year-old Texan, he could get used to this type of schedule.

“I’ve been on the phone so much that there is really no time to sit down or go see anybody,” Buescher said. “It’s been wide open. I’m imagining that we give it until next week when we have that off weekend. I’m going home to see some family and will be able to relax and let it set in then.”

Buescher stated that he had run through his phone battery twice in the same day, while doing interviews and talking to the team, which is a new record for him.

In the five races before the Chase, Buescher heads to some of his better tracks as he will try to edge David Ragan for the 30th position. In 2014, he won his first career XFINITY Series race at Mid-Ohio, a track similar to Watkins Glen. Then he heads to Bristol, where he finished 21st in the spring before going to Michigan where the Ford camp is always fast. Darlington and Richmond might be two tracks that the No. 34 team needs to get through in order to clinch a Chase berth.