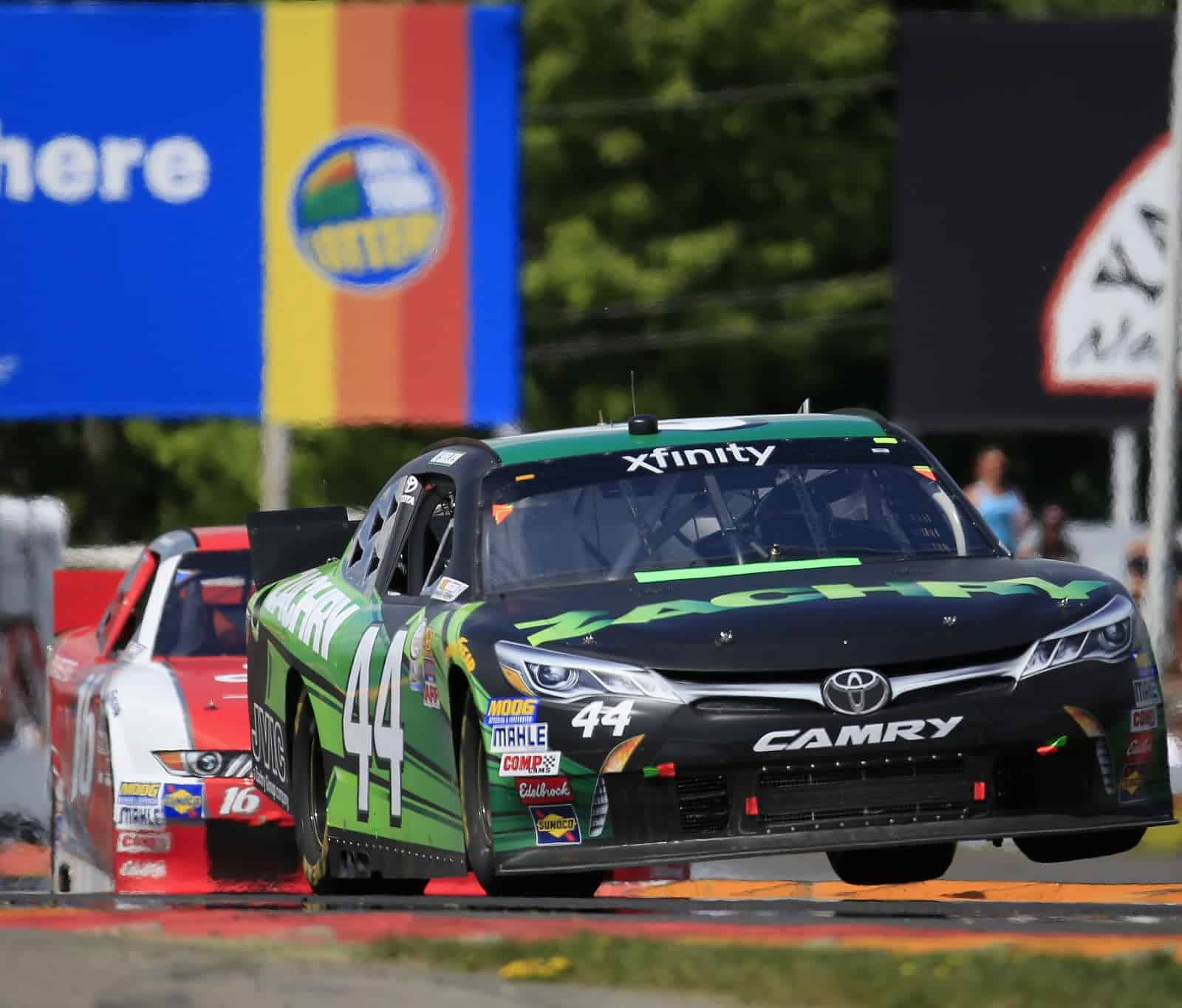 Joey Logano and Team Penske finally put everything together and claimed an XFINITY Series win in 2016.  Logano piloted the part-time No. 12 car to victory at Watkins Glen International, winning the Zippo 200 at The Glen.  He led 67 of 82 laps, claiming his first NXS victory since winning at Watkins Glen one year ago.

“It’s been a long time coming for the XFINITY team here, on the Penske side,” Logano said in victory lane.  “And getting this 12 (car) group together that doesn’t race very often, with Greg Irwin leading it, and having my 22 (car) guys from tomorrow pitting it today did a great job as well.”

Both Logano and Brad Keselowski represented Team Penske on Saturday, and they had the dominant cars of the race. Logano and Keselowski started first and second respectively. They could have stayed there for the entire race if not for a rash of early caution flags that set off a variety of pit strategies.

Both drivers made their first pit stop under caution on lap 16. Logano in particular quickly marched through the field, taking the lead back from Ty Dillon on lap 24. He would hold the top spot until his final trip to pit road on lap 48. Along the way, it became clear that nobody except Keselowski could hang with Logano long term.

Logano was fortunate to be at the front of the field throughout what became a chaotic race. A multi-car accident on lap 18 damaged nearly a quarter of the field, including Kyle Busch. Many drivers had trouble negotiating the bus stop chicane. Paul Menard and Garrett Smithley both clipped one of the corners early in the race, showering the racing surface with grass and dirt. Other drivers, including Trevor Bayne and points leader Elliott Sadler, went sliding out of control and into the runoff area.

However, the most bizarre moment was Derrike Cope’s apparent engine failure on lap 59.  Cope had dropped off the pace on the backstretch and was coming to a stop when the front of his car suddenly blew apart, spewing black smoke into the air. Nobody was sure about what caused the explosion, prompting NASCAR to impound the No. 70 car for further evaluation.

Three laps before Cope’s mishap, Logano took the lead away from Daniel Suarez, and Keselowski went to second soon after. Following the restart on lap 62, Logano and Keselowski ran side-by-side all the way to the Bus Stop, where Logano jumped ahead. Keselowski

continued to follow Logano, looking for a way to pass his teammate. Logano was able to open up a gap on Keselowski in the carousel, but the No. 22 had the advantage in the esses. As the race entered its final stages, the question was not if a Penske car would win, it was which Penske car would be the victor.

With nine laps to go, Keselowski was still tailing Logano when a mechanical failure dashed his hopes. A rough ride over one of the curbs in the bus stop broke a track bar mount on the No. 22. The damage knocked the rear end of Keselowski’s car out of alignment and caused a severe right-rear tire rub. Keselowski tried to keep pace with his teammate for several laps but eventually returned to pit road. He would lose several laps and finish 24th. Menard took over second place and attempted to chase down the No. 12, but Logano prevailed to win his 26th XFINITY race.

“It was a lot of fun racing there with Brad,” Logano said.  “I was running as hard as I can, trying not to make mistakes.”

Daniel Suarez was the only NXS regular to finish in the top five. He had a fast car and a little bit of luck on his side at The Glen. After inheriting the lead during a green flag pit stop cycle, Suarez’s teammate Erik Jones ran out of fuel. Suarez reached pit road just before the caution came out, allowing the No. 19 team to service the car as the rest of the field slowed down. Suarez lost the lead only to get it right back when everyone in front of him pitted under caution. His fourth place finish is his ninth top ten of the season.

Many of the drivers who finished at the back of the back got swept up in the lap 18 crash. Trouble broke out when Ryan Sieg and Todd Bodine made contact in the esses. Bodine hit the wall nose first and went sliding across the track, only to get slammed by Blake Koch and Tomy Drissi. The incident blocked most of the track and collected several other cars, prompting NASCAR to throw a red flag while track workers cleaned up the mess.

Darrell Wallace Jr. was among those who took damage. He returned to the race but finished 19 laps down in 29th.

“All I see is we got bad luck,” Wallace said after the crash.  “Just a bummer; I hate it.”

It is debatable whether or not Koch took the hardest hit in the big crash. However, he definitely had the most to lose of the drivers collected in the wreck. By finishing 35th, Koch is only two points above the Chase cutoff. Several drivers are within striking distance with six races to go.

“I just hate it for everybody, and the points, all my guys are working so hard,” Koch said.  “I’ve never been in this situation (competing for a Chase spot).  So we’re just probably gonna go to the next track and do the best we can and just be smart, and take what it gives us.”

If Ross Chastain makes the NXS Chase, Watkins Glen will be a big reason why. Just when it looked like Chastain’s Chase chances were slipping away, he finds himself two points below the cut line. His 14th place result was not outstanding, but on a day when Koch, Sieg, and Jeremy Clements all struggled, it made for a good points day for the No. 4 team.

In the midst of a partial season in which he has reached unbelievable levels of dominance, Kyle Busch finally had a bad day. After advancing to second on the opening run, Busch pitted during the first caution to get splitter damage on the No. 18 car fixed. The repairs put Busch deep in the field, and as he tried to get back to the front, the big crash on lap 18 broke out right in front of him.  Busch nearly came to a stop at the exit of the esses and almost had the wreck missed, but another car slid into him as he tried to slip through. Busch went to the garage with heavy rear end damage and did not return to the race. Through 12 NXS starts this year, his 37th-place finish is his only result worse than 4th.

All of the other Sprint Cup regulars fared better.  Third-place finisher Kyle Larson might have had the best car outside of the Team Penske duo, but he faded too much in the closing laps to challenge for the win. Bayne, meanwhile, fought back to finish fifth after his slip up in the bus stop with Keselowski.

Making a one-off NXS appearance at his home track, Bodine was disappointed with his finish.

“They said the 39 ran into the back of me at the top of the esses.  I thought I had it saved, and I don’t know if I just overcorrected or

what, but it turned right out in the outside wall.”

“I know these young kids are trying hard to race and get up front and make a name, and Ryan’s done a great job… but you gotta think,” Bodine said. “Restarts, and being all them cars going every which way, all over the place, just going up the hill, sometimes you gotta give.  You can’t always take, you gotta give a lot in this sport.  I think that was probably one time he just needed to give and didn’t, so we got a wrecked race car.”

Under the following red flag, the NBC broadcast team talked to road ringer Kenny Habul, who had a colorful take on the race. Habul, who would finish 17th in the JR Motorsports No. 88 car, reported that the other racers were driving like “bloody maniacs.” Habul was also not pleased with Goodyear’s tire selection for the event, referring to the hard rubber compound as the “Fred Flintstone special.”

For at least one week, Team Penske and Joe Gibbs Racing swapped roles in the XFINITY Series. While the Penske Fords displayed fantastic speed and dominated the event, the JGR drivers ran decent but otherwise looked a step behind. Logano’s victory should be a good momentum builder for Penske, but it will take a series of races on the intermediate tracks to see how much Penske has really closed the gap.

As for the NXS regulars, Watkins Glen did not turn out to be a great opportunity to snag a win. Despite a flurry of different pit strategies, the fastest cars were able to get back to the front of the field with ease. Sadler recovered from his spin to finish sixth and leads Suarez in the season-long points standings by 11. Those two, as well as Erik Jones, are still the only NXS regulars who have won this year. There are several other drivers who are practically assured Chase berths thanks to their points positions. However, the chance to win and pick up some bonus points for the postseason is quickly slipping away.

The XFINITY Series will visit the Buckeye State on Saturday, August 13th for the Mid-Ohio 200 at the Mid-Ohio Sports Car Course.  Race coverage begins at 3:30 PM Eastern on the USA Network.