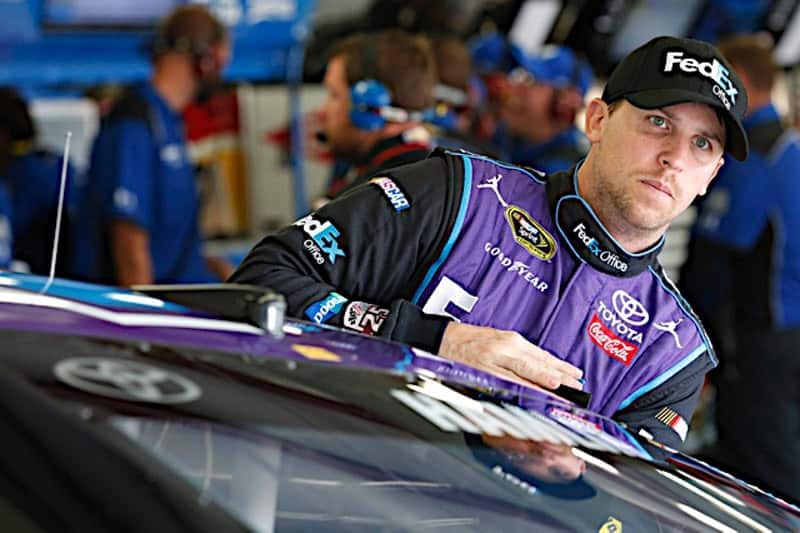 For Denny Hamlin, the wait for NASCAR’s a return to a road course must have seemed like an eternity.

While it was ultimately lost in the story of Tony Stewart’s triumphant comeback, Hamlin’s collapse in the final turn at Sonoma Raceway cost the Daytona 500 champion a chance to claim his first road course victory in June. With only six top 10s and two top 5s in 20 prior road course starts beforehand, Hamlin’s previous history didn’t read like one that would lead to a another shot at victory lane on a road course, either.

However, in the closing moments at Watkins Glen International, there Hamlin was.

Running inside of the top 10 throughout the day, Hamlin snuck into the lead late in the race when a poor restart from leader Brad Keselowski and second-place Kyle Busch sent both drivers sailing up the track and out of contention in turn 1 of the 2.45-mile WGI. Once again, Hamlin found himself in the lead in the closing moments on a road course.

This time, the Virginian capitalized.

“I remember in (2007) here where we ran top three with Tony Stewart and Jeff Gordon and thought we had a shot. Denny will tell you he had a chance to move Gordon for the win and didn’t because he thought it would be easy to win a road course race,” Mike Wheeler, Hamlin’s crew chief said.

As Hamlin quickly learned in the following years, winning a road course would prove much more difficult than it seemed. That fact was true again on Sunday, as Hamlin would have to endure a fierce challenge to take the victory, with both Martin Truex, Jr., and Brad Keselowski running closer to Hamlin’s No. 11 FedEx Toyota Camry into the race’s final corners than Stewart was going into the hairpin at Sonoma.

However, Hamlin’s drive was pure, hard and error-free. Coming off a heartbreaking unforced error, Hamlin elected to drive defensively and hit his marks, even if it allowed his competitors to close.

“I gave up a little bit on corner entry to make sure that I hit my marks,”Hamlin said. “It was my job to make them make a move on me, don’t overshoot and open the door for them, make them make an aggressive move to pass (me).

“By doing that, you’re being a little defensive and you’re not getting 100% out of your race car. You’re allowing them to get closer.”

Because of that, Truex and Keselowski were right behind Hamlin during the final lap. However, Hamlin kept his cool, and when the Joe Gibbs Racing driver sailed his No. 11 off into WGI’s final corner and saw Truex spinning behind him, he began celebrating a victory for the first time since February.

Just two months after blowing a road course win, Hamlin was pulling into victory lane at Watkins Glen International, proving that his June run at Sonoma was more than just a stroke of luck.

“It wasn’t a fluke,” Hamlin said. “Sometimes you see guys run up front on a road course and you’re like, ‘Where did that come from?’ And it only happens once. I really think that we’ve turned the corner with all of our Toyota teams.”

The win serves as a big moment in Hamlin’s season. By virtue of the victory, Hamlin joins JGR teammates Kyle Busch, Carl Edwards and Matt Kenseth with multiple wins heading into the Chase. With the road-course win pairing with a Daytona 500 victory earlier in the season, Hamlin also adds two major wins to his resume.

It may not have been as easy as anticipated, but nine years later Hamlin finally made good on his thought in 2007.

More importantly, though, Hamlin finally finds some momentum with the playoffs approaching after struggling through the spring and summer. If his No. 11 team can continue to build the momentum in upcoming races at Bristol Motor Speedway and Michigan International Speedway, they could join teammates Busch, Edwards and Kenseth as championship threats when the Chase arrives in September.

Kyle Busch has to figure out that a driver has to know his car’s limitations.