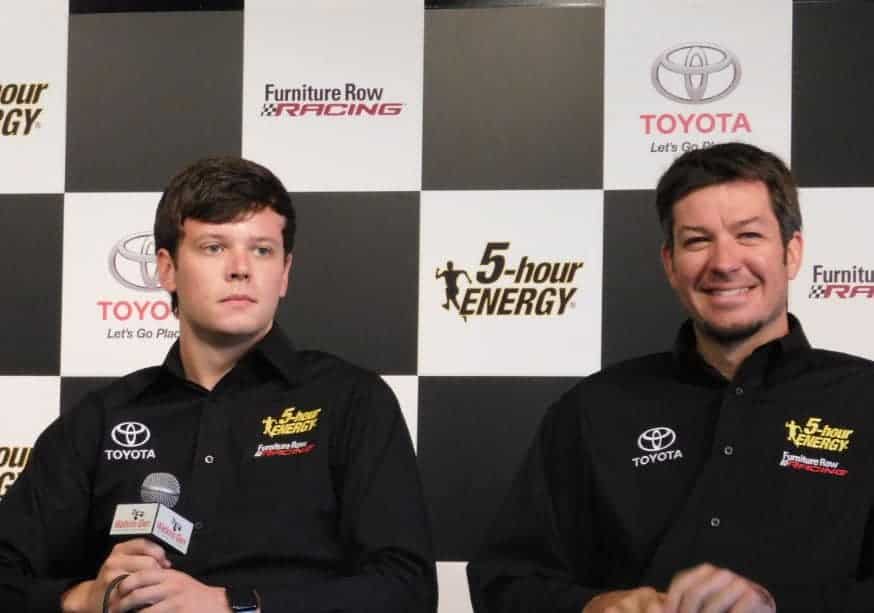 On Sunday morning prior to the Cheez-it 355 at the Glen, the worst kept secret in the NASCAR garage was finally announced: Erik Jones will jump into a second Furniture Row Racing Toyota beginning in 2017.

Jones, 20, will drive the No. 77 5-Hour Energy Toyota, teaming with Martin Truex, Jr. The Joe Gibbs Racing development driver will still be competing in JGR equipment, as Furniture Row Racing is receiving technical data from the championship winning organization.

“I was anxious for this day,” Jones said about the announcement. “I’m excited to be here. It’s cool to be a part of Furniture Row and with them growing, and along with 5-hour Energy too. A big company like that is cool this early in my racing career and something that I’ve always wanted. It’s a good feel all around. To see it come together in the past month or so has been a pretty cool experience for me. I have a lot left to do this year, but I’m excited for next year.”

5-hour Energy will serve as the primary sponsor for Jones for 22 races in 2016. The Michigan native is only signed for a one-year deal, offering an opportunity for the future rookie to jump to JGR or elsewhere if a spot becomes available in 2018.

Team owner Barney Visser announced that the team will get a charter for Jones, ensuring him that he will be in all 36 races. With the new charter system in 2016, 36 teams are guaranteed a position in each race.

“It’s all come together in the last month,” Visser said. “To find a driver like Erik (Jones) and a sponsor like 5-hour Energy, along with our technical agreement with Joe Gibbs Racing, we think we’re going to be able to run right up where we need to run. We’re really excited to finally get it all put together.”

Jones has three Sprint Cup starts to his resume, along with an effort in relief for Denny Hamlin at Bristol last April. His debut came at Kansas Speedway, replacing Kyle Busch where he was running in the top 10 before getting loose, crashing the No. 18 car, finishing 40th. He led one lap during a cycle of green flag pit stops.

Jones was thrown into the No. 20 Toyota last November after NASCAR suspended Matt Kenseth for his role in a crash at Martinsville Speedway with Joey Logano. He had a 12th-place finish at Texas and a 19th at Phoenix, starting in the top 10 for both.

Furniture Row Racing began over a decade ago when Visser threw a program together for the Denver, CO based team. FRR didn’t compete in a full season until 2008 when Joe Nemechek piloted the machine with a best finish of 11th at Talladega.

The organizations first victory came at Darlington in 2011 when Regan Smith held off Carl Edwards for the final 11 laps. Last year, Truex made it to the championship race with a shot at the championship, ultimately finishing fourth in the series standings, still a career-high for Furniture Row Racing.

“We’ve gradually ramped it up and built the relationship that we thought we needed in order to be successful,” Joe Garone, team president said. “It comes back to Barney’s commitment to invest in the team and our sponsors. To be able to get to where we have a platform that  will support multi cars is huge and it’s at the sacrifice of a lot of hours and a lot of hard work from a lot of people.”

Through 21 races in 2016, Truex has led a series-high 1,005 laps, including the most dominant performance in NASCAR history pacing 592 miles during the Coca-Cola 600. Currently, the No. 78 team sits eighth in the Cup Series standings.

Konichiwa Yota bishes!
Do I have your permission to Yota kow-tow & bow now, yes?
Rofl, what a comical way to arrive at a “BIG NEWS” announcement.
The Jones thing was leaked, but essentially public knowledge Thursday.
Then Friday evening FRR did the big 5HR & resign of Martin “BIG PRESSER”, saying only that they “could not confirm” the Jones thing.
Then NADA all day Saturday.
Only now is “BIG NEWS PRESSER” surprise announcement “Jones confirmed” on Sunday.
Lol, what a contrived whack of Yota rice patty spoon feeding!

So basically Gibbs is now a six-car team.

So where is the charter coming from? What current charter owner is selling their charter?