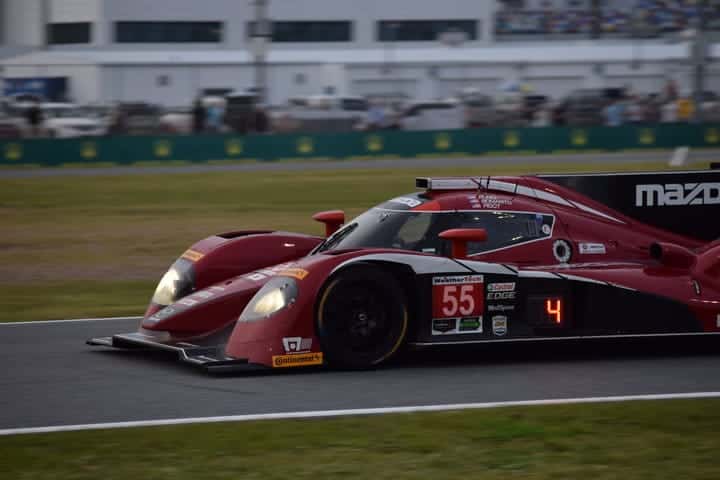 On Saturday afternoon, Mazda’s Jonathan Bomarito put down a lap of 114.507 seconds (127.266 mph) in the closing stages of qualifying, which held up to take the overall pole for Sunday’s Continental Tire Road Race Showcase at Road America.  It is Mazda’s third pole of the season.

Afterwards, Bomarito was very pleased with the form of his Lola-based Mazda.

“The whole team’s doing a great job this weekend,” Bomarito said in the post-qualifying press conference.  “We rolled of the trailer really fast, with great balance, which is a tribute to SpeedSource Engineering and all their guys. A lot of work to get to this point, but tomorrow is what it’s all about. It’s gonna be a hard fight. It’s tough like always, we’re just gonna do our thing, get a good start and kind of manage from there. Hopefully it goes as well as the rest of the weekend. We’re excited, everybody has their head down just super focused.”

In Prototype Challenge, qualifying was a back-and-forth affair between two of Starworks Motorsport‘s three entries and James French in Performance Tech Motorsports‘ No. 38.  Alex Popow and José Gutierrez traded fast laps early in the session, but French asserted himself late in the 15-minute time period.   On his fourth lap, French went to the top of the charts with a lap of 119.465 seconds.  From that point, French would not be beaten as he lowered the pole time on three consecutive laps.  His sixth lap of the session was 119.133 seconds (122.324 mph).  This lap was good enough to give French the PC pole.

Gutierrez ended up seven-hundredths of a second back in second, but flunked the post-qualifying check.  As a result, the No. 7 will start at the rear of PC.  As a result, JDC/Miller MotorSports‘ Misha Goikhberg will start second in PC.  BAR1 Motorsports‘ Matt McMurry was third, followed by PR1/Mathaisen Motorsports‘ Robert Alon and Popow.

In GT Le Mans, most of the manufacturers were in play during the session.  First, it was Corvette Racing‘s Oliver Gavin who was quickest, then Ford Chip Ganassi Racing‘s Dirk Müller went to the top. Risi Competizione‘s Giancarlo Fisichella was right up there as well.  Even Porsche North America, who has struggled in recent weeks, was right there with Patrick Pilet.  However, it was Müller who put down a lap of 122.451 seconds (119.009 mph) to take the class pole.

Müller’s pole run is the first pole position of the year for the No. 66 Ford GT, but the third pole of the year for Ford Chip Ganassi Racing.  Afterwards, Müller was pumped.

“Since the first lap I went out here, I felt strong and good,” Müller said after the run.  “But you never know, I mean this morning the competition was all of a sudden really strong and it was really, really close. We had to make a tire choice and thanks to Joey and the team we went in the right direction, for today and hopefully tomorrow. I was pole for Le Mans so this is my second, but first for IMSA.”

Pilet was four and a half tenths back in second, followed by Ryan Briscoe in the No. 67 Ford GT.  However, Briscoe’s car was too low in post-qualifying inspection and will be moved to the back of the GT Le Mans class.  He will be joined in the back by both of the BMW’s, who had their times disallowed due to boost control issues.

As a result of Briscoe’s penalty, Fisichella will start third in class, followed by Earl Bamber in the second Porsche 911 RSR.  Corvette Racing’s Antonio Garcia will start fifth.

In GT Daytona, the usual approach of ramping up to your best possible effort didn’t really come into play on Saturday.  Instead, you had to go out and put your best foot forward relatively early.  Riley Motorsports‘ Ben Keating was the early pace setter, but he was eventually usurped by the Alex Job Racing/Team Seattle entry driven by Alex Riberas and the Stevenson Motorsports No. 6 Audi of Andrew Davis.  Eventually, Riberas set a time of 127.520 seconds (114.279 mph) on only his third lap on track.  He then pulled in and let the rest of the pack take shots at it.  No one was able to beat it, so Riberas strutted out of qualifying with the GTD pole.

Riberas beat Davis by just under a quarter of a second for the pole.  Davis’ teammate Matt Bell was third fastest, while Keating was fourth.  Scuderia Corsa‘s Christina Nielsen was fifth.

Alex Job Racing‘s Cooper MacNeil was 11th quickest in his Porsche 911 GT3-R.  However, he ducked into the pits and got some adjustments on his No. 22 before heading out to make another run.  That is a clear violation of Article 40.2.6 of the IMSA Sporting Regulations, which states in part, “Working on the Car is prohibited once it has left its Pit Box during a qualifying Session with the exception of data download, taking tire temperatures and/or making tire pressure adjustments.  If a Car is worked on after leaving the Pit Box, all qualifying times are forfeit[ed].”  The only exception to the rule is clearing debris, which must be done under direct supervision of an IMSA official.  As what the No. 22 team didn’t meet any of the exceptions, their times were omitted and MacNeil will start at the rear of the field

The Continental Tire Road Race Showcase is scheduled to go green on Sunday just after 4 p.m. EDT.  The race will air live on FOX Sports 1.