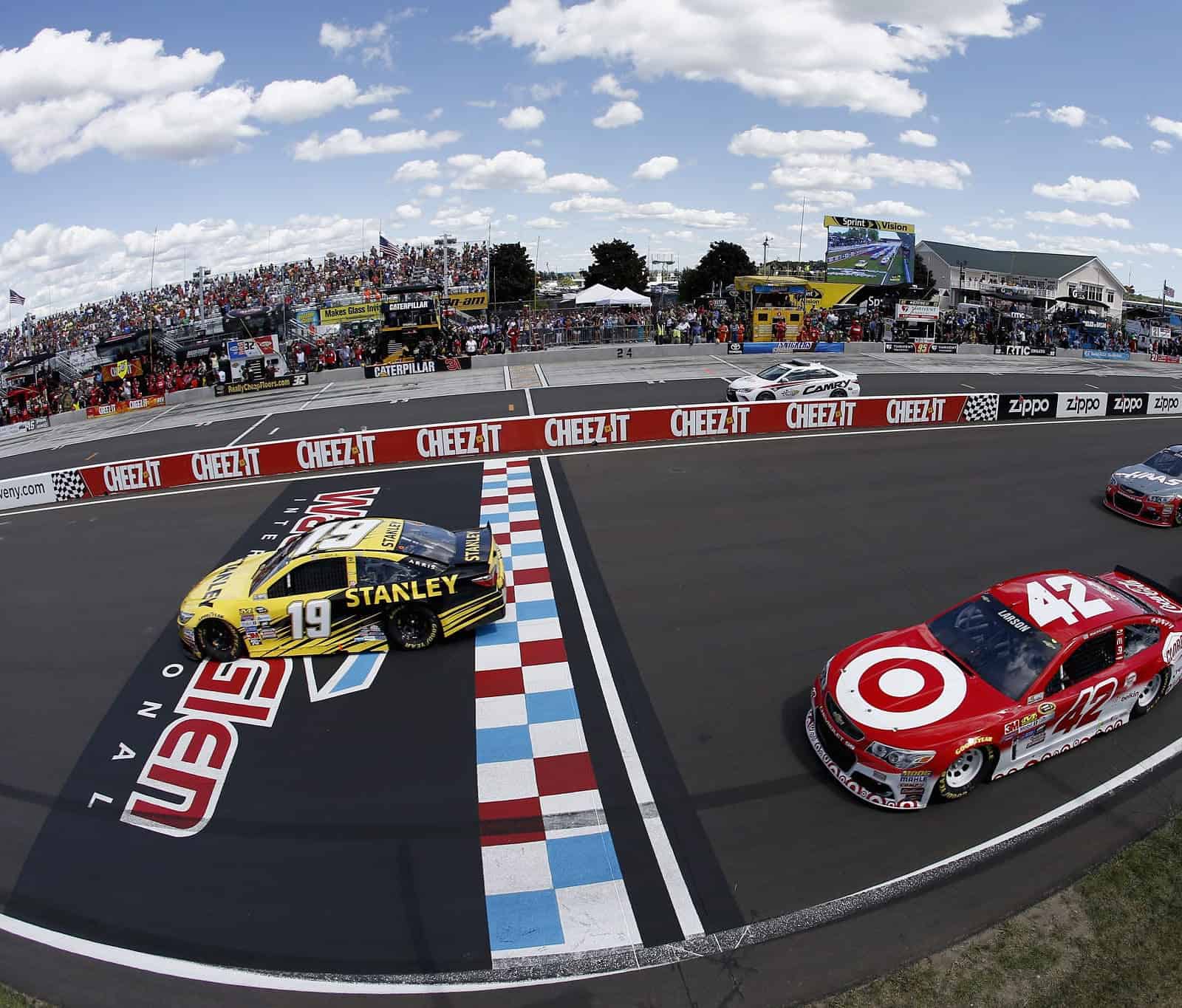 Who… Gets My Shoutout of the Race?

This week’s shoutout goes to the staff at Watkins Glen International, including track president Michael Printup.  Many years ago, Watkins Glen was known as the race with the lowest purse on the calendar and maybe not the most exciting action. Also, the facilities weren’t exactly the greatest.  During the boom years of NASCAR, it was rumored that if there was ever a new oval track built in the Northeast (Ex: the attempt to get a track built in Staten Island), it could take Watkins Glen’s date away.

Those rumors did not come to pass.  In the past decade, Watkins Glen International has acquired new grandstands (the frontstretch stands are from the now-closed Nazareth Speedway, while the others are from Michigan International Speedway) and made a number of improvements to the circuit.  The recent eight-figures spent to repave the short course, the boot and the pits are just one more example of the work that’s gone into the property in recent years.

For this race weekend, the track made the decision to open up 300 additional camping spots on Wednesday due to overall demand.  The track has done an excellent promoting the event and racing in general.  Sunday saw a sellout.  Over 95,000 chaps (not to mention a bunch of pets) were on hand to watch Denny Hamlin take the win.  It’s not that often that you get loud, unified crowd reactions at race tracks.  You did get that Sunday.

While I was not there Sunday (my colleagues Dustin Albino, Aaron Bearden and Zach Catanzareti were and did an excellent job covering the action), I have covered six previous race weekends at Watkins Glen (Cup weekends from 2009-2013, plus this years’ Sahlen’s Six Hours at the Glen) and could always count on the staff being helpful and friendly, while being quite courteous and kind as well.  They’re much more than just one-third of the Boy Scouts of America’s Scout Law, though.

What… Is the Takeaway from the Race?

Watching Sunday’s race, being aggressive can take you to great places.  However, you cannot be too aggressive.  Brad Keselowski and Kyle Busch found that out the hard way.  The two men ended up in the runoff on lap 81 and lost the race right then and there.

In Hamlin’s case, sometimes it is better to be lucky than good.  Also of note, Hamlin was really hobbling after the race, reportedly due to his back acting up again.  I’m surprised that wasn’t reported before the race. We all remember what happened the last time Hamlin hurt his back.  We’ll have to see if that affects him in the coming weeks.  Luckily, he’s got a week off to relax.  Part of that might be spent in bed.

Where… did the pole sitter and defending race winner end up?

Carl Edwards won the pole and led the first 25 laps before making his first stop.  Unfortunately, he fell victim to the same problem that a lot of others did: issues on pit road.

He was busted for an uncontrolled tire on the stop.  Everything on the stop was just fine, but the tire changer took the right front tire off a little too forcefully and it bounced off of the pit wall.  While technically, the crew had the tire under control when Edwards left his stall, it was on the outside of the stall.  That resulted in a pass-through penalty.

Later in the race, Edwards was caught up in a crash in turn 9 involving David Ragan, Alex Kennedy, Clint Bowyer, and Aric Almirola.  Edwards would eventually recover to finish 15th, but his day could have been much better.

Defending winner Joey Logano started seventh and planned on a two-stop strategy.  He took the lead on lap 26 when Edwards pitted, then stayed out all the way to lap 34 (last of the drivers to stop).  Unfortunately, he too fell victim to a penalty when he got busted for speeding entering the pits.

Logano spent the rest of the race making up for lost time and finished a strong second.  However, the second-place finish came as a result of his Team Penske teammate Brad Keselowski spinning out Martin Truex, Jr. in the final turn and Logano using momentum to take the spot.  Despite the penalty and contact that bent the splitter and created a tire rub, it was a great day for the No. 22 team.

The first half of Sunday’s race was relatively calm with only one yellow for debris (a brake hose).  However, when NASCAR put out the yellow for a loose tire on pit road from Matt DiBenedetto on lap 49, everyone closed back up and heck broke loose.

Less than a lap after the restart, Ricky Stenhouse, Jr. spun exiting turn 9 and created a mess that wrapped up Greg Biffle, Austin Dillon and Jimmie Johnson.  This caused the race’s first red flag.  Then, there was another wreck (the one mentioned above with Edwards), then a yellow when Landon Cassill spun and covered the Inner Loop in dirt.  And so on and so forth.  That slightly questionable yellow completely changed the complexion of the race.

Why… did Denny Hamlin win at Watkins Glen?

Denny Hamlin won on Sunday for a couple of reasons.  One, he avoided issues on pit road that felled so many other potential contenders.  Two, he had a legitimately fast race car.  And finally, he got lucky and found a hole on the lap 81 restart when Brad Keselowski and Kyle Busch slid off the track in turn 1.

Martin Truex, Jr. possibly had the better car at the finish, but just couldn’t slip past.  He definitely tried to get it done, though.

How… should road racing figure into the future of NASCAR?

Personally, I believe that the Sprint Cup Series has always put on great races on road courses.  Longtime fans remember the duels that Rusty Wallace and Ricky Rudd had at Sears Point (now Sonoma Raceway) and Watkins Glen in the late 1980’s and early 1990’s.

Now that everyone gives road racing the respect that it deserves, the races are more wide open.  The presence of the Chase has generally hurt short track racing in Sprint Cup.  In Bristol’s case, the racing has also changed due to the re-configuration in 2007 and the subsequent grinding that has ultimately glued drivers to the outside even more.

Given that NASCAR is not going to be as strict when it comes to course cutting as seemingly any road racing sanctioning body would, drivers can be more creative in their driving.  It is that creativity that really drives interest.  That, and a willingness to use bumpers to get their way.  I’ve been watching a lot of road racing over the past few years.  You’re seeing more and more tactics similar to what you would see in a NASCAR race coming into sports car racing.  Since the cars are nowhere near as fragile as they once were, it is possible to go toe-to-toe.

Ultimately, action like what we saw Sunday leads to fans clamoring for more road racing.  A fan poll on Sunday’s edition of NASCAR RaceDay on FOX Sports 2 indicated that 90 percent of those polled want another road race in Cup.  I would be cool with that as well.  It might be hard to get another road race in Sprint Cup, but if they can do it, it needs to be in the Chase.  If improvements are made, Road Atlanta in mid-October might not be a bad option.  Brad Keselowski might not be a fan, though.  They’ve held two races in what’s now the XFINITY Series there, but the most recent one was in 1987.  I’d go.  Mid-October should be quite nice in Northern Georgia, provided that it doesn’t rain.

Meanwhile, the XFINITY Series has created what amounts to a road racing season here in August with the Glen, Mid-Ohio and Road America.  NASCAR should take advantage of that by adding a fourth road race and creating a mini-championship within the championship, much like what ARCA does with their short track races.  It would be a great way to help promote the series.  Of course, Cup drivers would be ineligible for said title.

I’m unsure where a fourth XFINITY road race should be run, to be honest.  There are plenty of options.  Montreal might be out unless they could get a Cup race as well.  COTA’s an option (and Larry McReynolds-approved) since they need another big weekend to help the track make money (the U.S. Grand Prix is a money loser because of Bernie Ecclestone’s policies).  Others could be in play.

Regardless, NASCAR should consider giving road racing a little more attention.  Maybe they shouldn’t go back down the road of trying to create their own road racing series (they planned to introduce a “NASCAR LR” series for 1987, but it died on the vine), but just having some more in the National series would be good.

Helping to make it possible for more NASCAR drivers to compete in IMSA every once in a while, wouldn’t be a bad move, either.  I’d love to have more NASCAR drivers in addition to Jamie McMurray and AJ Allmendinger in the Rolex 24 every year (this year, they were joined by Kyle Larson and Michael Lira (for Lira, he raced in the Continental Tire SportsCar Challenge)).  I feel like that could be a win-win for both series.  I definitely wouldn’t mind another interesting mid-race press conference with Clint Bowyer where he exclaims something like, “Those diesels; them’s chicanes.”  Note that Bowyer really said that back in 2013.

Once upon a time, wasn’t there such a thing as a “local yellow” on road courses? That would allow quick debris removal and not require the interminable 4 or 5 laps of a full-course caution.
Unfortunately, we won’t see any additional road course races in the near future since NASCAR has cemented the composition of the tacks on the schedules of each of the three series for the next several years.

Yes, the five-year deals have more or less cemented the current schedule through 2020. That’s going to make adding a road course nearly impossible in Sprint Cup.

I kind of like that they did the 5-year thing. It shows us that for the next several years, we already know that the schedule is going to be the clone track death march with special guests.

The local yellow is still a common item in road racing series from SCCA Club Racing all the way thru F1. Nascar IMHO doesn’t use it because it gives them the chance to artificially create excitement.

Brian probably uses it as a selling point for commercial time too. Not to mention double file restarts.

In spite of the 5 year deal, don’t several of the tracks locked in have infield road courses? I know one of the reasons they say road courses aren’t good is the lack of the ability to see most of the course. Wouldn’t running on the road course at the tracks solve both problems? Maybe Chicago or KC should try their road course and put on a ‘show’ worth watching?