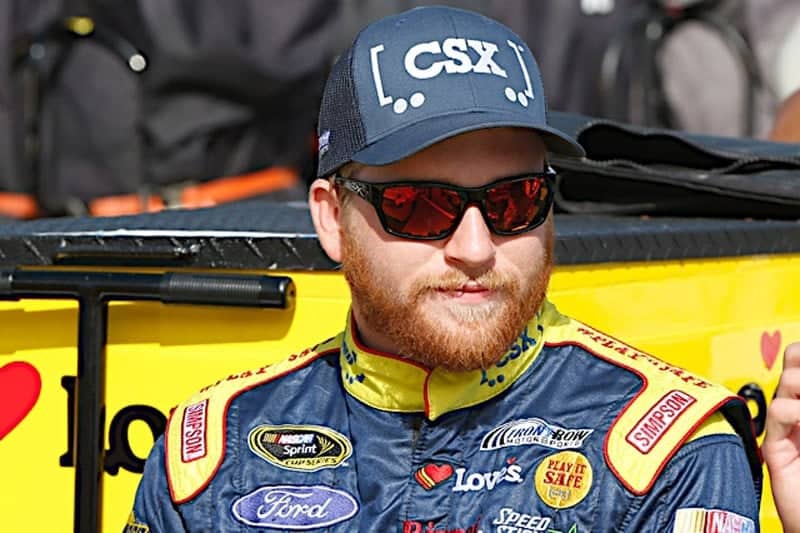 Chris Buescher has been the unlikeliest of stories this season, and is currently in the midst of a Chase battle of his own. Following a strategic victory at Pocono Raceway a couple of weeks ago, Buescher and his Front Row Motorsports team then eyed the second requirement they must satisfy in order to qualify for the Chase: make it into the top 30 in points.

In Sunday’s race at Watkins Glen International, Buescher entered the race six points behind 30th and started the race in the 25th position. While for much of the race he was able to keep his nose clean and seemed to be doing what he needed to do in order to gain those valuable points, Buescher got caught up in the final wreck of the day, a wreck that involved six other cars and brought out a red flag for 16 minutes and 44 seconds.

Buescher got stuck in the mud in a grassy area, and NASCAR required him to get out of the car and go to the infield care center because he was unable to drive the car away. The driver of the No. 34 was trying to stay in the car and drive away because of his precarious position in the points standings.

From where I was, we barely caught the wall on the inside,” Buescher said, describing the wreck. “Basically, the splitter hooked up in the mud. I know when I ran off course, trying to avoid the No. 4, it swung all kinds of grass over the car. I knew what the issue was. I was just trying to get them to push.”

“We’re sitting downhill,” Buescher continued. “Splitter is caked up under mud. Actually broke it loose. It was pretty packed. My hope

was that we could be pushed backwards. They don’t have any straps or anything to be able to hook to the back. Basically they’re depending on being able to push the back bumper to get you moving. We didn’t have that opportunity. I get it. I mean, I get why they made me get out. I was just really frustrated and tried really hard to stay in it so we could keep rolling without losing any spots.”

After his car was brought back to the garage, the team was unable to begin working on the car right away as the red flag was still displayed. Teams are not allowed to do any work on the cars while the red flag is out.

However, as soon as NASCAR put the race back under caution and the cars still on track were rolling again, the team hustled to get the No. 34 back on track.

The team did so quickly and efficiently, as Buescher returned to the track only one lap down and was able to keep it that way at the checkered flag, finishing 30th.

“They assessed the damage during the red flag,” said Buescher. “Got back into the car. As soon as the caution came back out, they hustled, got it back fixed up, rolling, pretty much saved our day. Owe a lot to them today.  They made sure we were able to stay in the points hunt.  Not the way we want to do it.  Really can’t have more days like that if we’re going to try and get in that top 30, but proud of them for their efforts to get it turned around.”