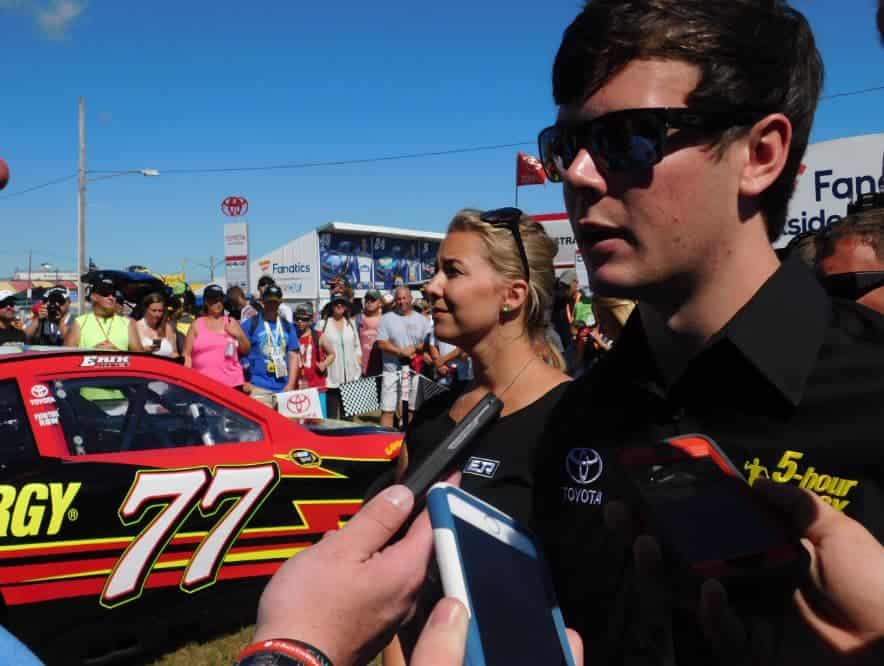 One of the worst-kept secrets of the season was officially revealed on Sunday when Furniture Row Racing announced that Erik Jones would be moving to Sprint Cup full-time in 2017.

Jones, a Joe Gibbs Racing development driver, will move to JGR’s satellite operation in 2017, driving the No. 77 Toyota as a teammate to Martin Truex, Jr. For Jones, Truex and FRR, the announcement is just another high in their already strong seasons: Jones sits fourth in the XFINITY Series points as a rookie, Truex absolutely dominated the Coca-Cola 600 and FRR will qualify for its second-straight Chase and third overall in their short existence as a team.

Jones is a talented racer, of that there is no doubt. He owns five NXS wins and another seven in the Camping World Truck Series. He won the CWTS title last season as a rookie and is favored to win the NXS title this season. He’s even made spot starts in Cup, filling in for Denny Hamlin, Kyle Busch and Matt Kenseth last season.

FRR looks strong but has never run a second full-time team. Will he be able to continue growing at the rate he has once he takes the wheel of the No. 77? Will he have a rookie year that rivals that of Tony Stewart (three wins) or one that mimics Kyle Larson (no wins)?

This argument can really be summed up in 26 words: Erik Jones, racing prodigy, running for a championship-caliber team with ties to both the best organization in the sport at the moment and the strongest manufacturer.

But I’m required to write a minimum of 500 words, so I’ll use the rest of the space to explain why.

Let’s put the JGR/Toyota connection aside for a moment. Comparing the early NXS careers of Larson, Stewart and Jones head-to-head shows that Jones is more similar to Stewart than Larson. Stewart only ran a partial season in NXS before moving up to Cup – Jones is running a full season this year, but had a part-time gig last season, so we’ll start with that.

Stewart’s stats in that 1998 season? 22 starts, five top 5s, no additional top 10s, a sweep of the poles at Rockingham and a whopping nine DNFs. What’s more, he only led 146 laps and averaged an 18.5 finish. Oh yeah, he drove for the Coach that year.

Jones, on the other hand, also driving for JGR, made 23 starts. He won twice, finished in the top 5 13 times, scored four more top 10s, and only failed to finish twice en route to a 9.2 average finish. That was before his 2016 season which has seen him win three more times and score 12 more top 10s through 20 starts. If Stewart could go on to win three races in his rookie campaign with those lackluster NXS stats, the sky is the limit as to what Jones could accomplish his inaugural campaign.

Larson, on the other hand, had a full season at the AAA level and here’s what he was able to do: nine top 5s, 17 top 10s and seven DNFs. It was a harrowing rookie season for the USAC standout, and while he moved up to Cup, he has yet to replicate his early accomplishments at that level.

It should be noted that Larson was driving for a Chip-Ganassi Racing team that has seen mediocre results the years leading up to his being tapped to drive the No. 42, and Stewart’s team was one that was on the rise – JGR won three championships in seven years between two drivers once Smoke started in the No. 20.

Which is why Jones’ future Cup team at FRR will play a big deal in his rookie success. Being aligned with JGR and having Toyota backing is huge, and while FRR has been plagued by issues this season, they are things that with a little luck can go away. Perhaps the jolt of a new, hyper rookie is just what is necessary to turn the gremlins away.

Just like the duo of sponsorship and talent, a good team and talent are necessary to have racing success. Jones brings the talent, FRR the team, and 2017 will see Jones in victory lane not once, but multiple times. Just like ol’ Smoke.

In 2017, Erik Jones will become the latest in a group of talented young drivers to make their way to the Sprint Cup Series, joining Chase Elliott, Ryan Blaney, Kyle Larson and Austin Dillon among others.

To nobody’s surprise, he’ll likely fair similarly to the rookies of recent years, too.

The announcement of Jones’ move to a second Furniture Row Racing team at Watkins Glen International confirmed one of NASCAR’s worst kept secrets, and in doing so began to build hype for the young Michigan native. Jones deserves it, too. Since earning a ride with Kyle Busch Motorsports by beating Kyle Busch himself in the 2011 Snowball Derby, Jones has gone on to win five XFINITY Series wins, along with seven wins and a championship in the Camping World Truck Series victories.

Jones’ stats are impressive, but he’s due for a slice of humble pie come his ascension to Cup. It’s not because he isn’t talented, it’s simply because of how difficult it is to win at the Cup level.

Ask any of the recent slew of hot shoes to make their way to Cup — Larson, Elliott, even Joey Logano — and they’ll tell you just how difficult it is to get to victory lane against the Cup veterans.

How hard, exactly? Only one driver — Trevor Bayne in the 2011 Daytona 500- has won a non-weather shortened race in his rookie year or earlier since the beginning of the 2010s. The last time a true rookie won a race outright was Juan Pablo Montoya in 2007, and Montoya entered his rookie season as a winner in both Formula 1 and CART.

Adding to Jones’ difficulties will be the adjustment for Furniture Row. After winning a race in each of the last two seasons, Barney Visser’s Colorado-based team will be moving to two full-time cars for the first time in company history.

The organization will have help with the adjustment in the form of support from Joe Gibbs Racing and Toyota, but doubling teams will prove to be a significant challenge regardless of support.

Sure, FRR will likely still run strong. Martin Truex, Jr., has been one of the best drivers in the paddock for the last two years, and the organization has already weathered a switch from Chevrolet to Toyota. But making the leap from one team to two, with a rookie, no less, won’t be easy.

Jones may find himself in contention to win a couple times throughout the year, and if he does it’ll be great for himself, his team and NASCAR as a whole. But based off of recent history, the realistic expectation for Jones should be consistent performances and a shot at a Chase bid. Anything else is just icing on the 5-Hour Energy cake.