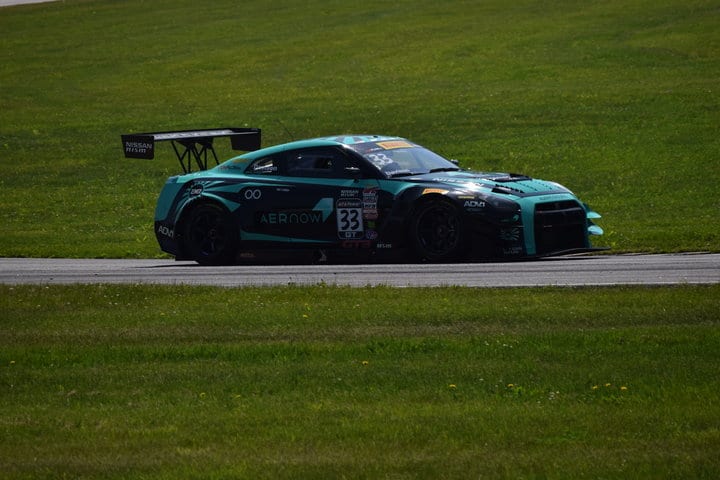 On Thursday afternoon, WC Vision announced that Pirelli World Challenge GT-class driver and part-time INDYCAR driver James (JD) Davison has been suspended and will have to sit out Saturday’s GT Round 16 at Utah Motorsports Campus (formerly Miller Motorsports Park) due to violating Section 1.11.3 of the 2016 Pirelli World Challenge Sporting Regulations. This section of the 64-page Sporting Regulations refers to “Racing Room,” but the text indicates that contact, squeezing another driver or blocking could all be considered violations of the rule.

The penalty stems from this incident at the start of Round 14 at Mid-Ohio two weeks ago when Pirelli World Challenge was on the undercard of the Verizon IndyCar Series’ Honda Indy 200 at Mid-Ohio:

Davison, driving the No. 33 Always Evolving Racing Nissan NISMO GT-R GT3, made an aggressive move on the start and went up the middle in between RealTime Racing‘s Spencer Pumpelly and K-PAX Racing‘s Colin Thompson.  As the field funneled into the turn, contact was made, cutting a tire on the No. 33 Nissan.  Davison spun and was hit by Michael McCann in the No. 82 Dodge Viper GT3-R.  McCann was then collected by Preston Calvert, who was making his GTA-class debut in the No. 77 Porsche 911 GT3-R.

You’re probably wondering why this resulted in a suspension.  It looks like a racing incident.  However, officials determined that Davison had taken an unnecessary risk.  As a result, the contact was deemed avoidable.  Also, Davison was already on probation from another crash that occurred at Canadian Tire Motorsports Park back in May.

After an appeal, Davison was penalized ten points and placed on probation for the next three race weekends.  Mid-Ohio was the third of those race weekend.

Pirelli World Challenge Race Director explained that the suspension was automatic when Davison was deemed guilty of avoidable contact.

“According to the rulebook, any driver who is on probation and violates the term of the probation is automatically suspended for one race – the next round,” Schroeder stated.  The Davison violation at Mid-Ohio occurred at the start of Race 1 before the start/finish line that included contact with Colin Thompson.”

In addition to the suspension, Davison has been fined $5,000.  When he returns on Sunday for GT Round 17, he’ll start another three race weekends on probation

For Saturday, Always Evolving Racing has employed the services of Craig Dolby as a substitute driver.  Dolby has raced in two races this year for Garage 59, McLaren’s factory team in the Blancpain GT Sprint Series as a teammate to Martin Plowman.  His best finish in the team’s McLaren 650S GT3 was 26th in the Main Race at Misano in Italy.