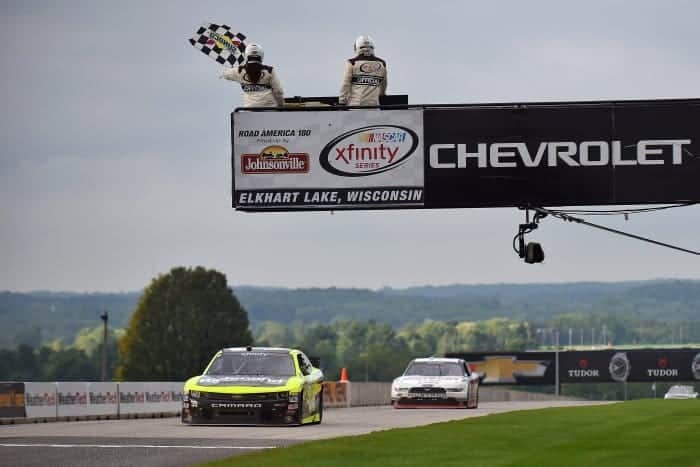 NASCAR has never visited many road courses in its near 70-year history. In fact, archival website Racing Reference has recorded only 11 road courses ever visited for the Sprint Cup Series, and there hasn’t been a new one since 1989.

Think about that: almost 30 years of racing at just the same two tracks, once a year.

I decided to go digging and looked into five of the nine road courses that no longer hold Sprint Cup Series races.

Before Daytona International Speedway, there was racing on the sand at Daytona. The Beach & Road Course was one of the most prestigious tracks in the country for stock cars before World War II, and after it was still one of the highlights of the NASCAR calendar. The frontstretch was highway and the backstretch was beach, with sand packed into the turns to help the cars make it through.

This was the course on which Bill France himself drove and won in the 1930s before becoming a successful promoter following the war. It was also home to some great stories from stock car racing’s colorful past, from cousins Lloyd Seay and Roy Hall taking turns on two wheels instead of four to journeyman Bill Blair beating favorite Fonty Flock when Flock ran out of fuel on the last lap.

The 4.1-mile oval was one of the longest and most treacherous courses in all of racing. Although it was an oval, it counts as a road course simply because there is no better definition of it. It was definitely not a short track, a superspeedway needs to be paved all the way around in order to count as one, and it really shouldn’t count as a dirt track for the same reason.

A 100-mile race held at a makeshift 2-mile road course at the Linden Airport in 1954 was the first road course race outside of Daytona Beach in what is now the Sprint Cup Series.

It was a strange race in hindsight. The sanctioning body allowed non-American cars to compete, and outside of Buck Baker in an Oldsmobile and a few drivers in Hudsons, the race was dominated by them.

New Yorker Al Keller won the race by leading 28 of 50 laps in his Jaguar. It’s the only time a non-American manufacter found Victory Lane in a Cup race until Toyota broke through in 2008. All told, four Jags finished in the top six.

Jaguar wasn’t the only foreign make in the race. There were also five MGs (Tom Rivers was the highest finisher of the five in 14th), two Henry Js and a Morgan. Finally, a “J. Kilgore” (who, according to Racing Reference, has no country, birth date, races outside of this one or a first name) finished 16th in their Porsche. Yes, a Porsche. Maybe not as ludicrous as when Dick Hagy finished 19th in a 38-car field at Langhorne Speedway in a Volkswagen Beetle a year earlier, but still a fun piece of trivia.

A 72-mile race on quite possibly the shortest road course ever ran in a NASCAR series (only .9-mile) is more notable for two milestones than anything that went on that day in 1957.

First, it is to this day still the only race in the series that has ever been ran in Washington state. Considering how often it rains there, it can’t be that big of a shocker no track builder in has gotten a project off the ground.

Second, when Parnelli Jones won in just a 14-car field, it was the very first victory for the No. 11 in Cup competition. Though Jones wouldn’t win in the No. 11 ever again, the number has visited Victory Lane 207 more times since, making it the winningest number in NASCAR history. Fittingly, Denny Hamlin‘s win at Watkins Glen International last Sunday came just three days after the 59th anniversary of this notable race.

Yes, that Road America. The popular XFINITY Series track also hosted a Cup race in 1956, which was a pretty notable race for what it was worth.

The 63-lap race was ran in the rain, the only Cup race ever ran in the rain. For those who have always wondered why NASCAR has long avoided running road course events in the rain, this event should answer why. Only 14 cars finished the race of attrition. Pete DePaolo, who managed Ford’s NASCAR efforts in the 1950s, brought three cars to the event. Two of them were driven by future Hall Of Famers Junior Johnson and Curtis Turner. All three were out by lap 21, with Turner bowing out after reportedly spinning into hay bales next to the track.

The race also had a pretty good story behind its winner. In 1954, Tim Flock had retired from racing after a win at Daytona had been taken away due to a controversial disqualification following the race. After doing some races for Buck Baker near the end of the season, a Wisconsin native and engine wizard for Mercury, Carl Kiekhafer, hired the 1952 champion to run for him in 1955. Flock won an amazing 18 races in just 38 starts, the second highest amount of wins in a season in history, and the Hall of Famer won his second championship. In 1956, Flock won three races early in the year before quitting the team due to Kiekhafer’s demanding, win-at-all-costs attitude. Flock would only win one more Cup race, but he made it count by winning this race, Kiefhafer’s home event.

The most prolific road course in the history of NASCAR. 48 Cup races were ran at the track, often with two races a year. It wasn’t always the only West Coast race every year, but it was always the biggest.

Often, the first race of the year was ran in mid-January, marking the official start of the season and was usually the only race before Daytona. Some of the most notable winners include Hall of Fame drivers Richard Petty, David Pearson, Cale Yarborough, Bobby Allison and Darrell Waltrip, and was the site of the first win in Bill Elliott’s career. In the early seasons, Riverside native Dan Gurney made the track his personal playground, winning five out of seven races from 1963-1968.

In 1988, the track held its final race and the track was closed down to make way for housing development and a mall. Sonoma Raceway may sit over 450 miles from where Riverside was, but in some ways it replaced the southern California classic, having its first race the year after Riverside’s last.

Not enough research. Or he could have 6 in the title.

The six road courses that the Sprint Cup series has competed on not talked about in this article are:
Augusta, GA (One race)
Bridgehampton, NY (Four races)
Titusville, FL (One race)
Willow Springs Speedway in Lancaster, CA (Two races)
And obviously Sonoma and Watkins Glen.

I wanted to just keep the number of tracks in the article to five due to space reasons. The only real track here that you could really debate doesn’t belong is Kitsap, but I decided to write about Kitsap instead of Bridgehampton just because it’s a more interesting track/race. Sure, Bridgehampton had three more races, but the only real notable thing I could find that happened there was Lee Petty’s final top 10. Compare that to Kitsap, which had a couple of strange milestones in its lone race and on a .9 mile road course to boot

The name is escaping me right now, but there was one road course race where the course was in fact dirt, not paved. Sadly the track lost its date well before I got my driver’s license and mom got her 455 powered Vista Cruiser or I could have been a contender given my speed on the fire roads in the Pine Barrens.

The dirt road course was Willow Springs. I was just having a senior moment. Here’s all I know about those two races…..

We all know there used to be dirt track racing in NASCAR’s top division, and the series has, and continues to run at many road courses over the years. But as it turned out, NASCAR’s Grand National (now Winston Cup) series ran two races on a road course with a dirt surface in Willow Springs California. The course included 11 corners and several elevation changes. The November 20, 1955 race ( which actually counted as an early race in the 56 season) was won by Chuck Stevenson, while the November 11th 1956 race (first race of the 1957 season) was won by Marvin Panch. Of course, according to Buddy Baker, it took him a couple years to realize the Riverside road course was paved, he spent so much time driving off the track.

Apparently there was a race at Lakewood Fairgrounds south of Atlanta… Pretty sure it was a road course, but I’m not sure if it was a NASCAR-sanctioned event.

Lakewood was a mile long dirt oval known for, well, having a lake in the middle. Its traditional Labor Day race was the most prestigious in the entire South for stock car racing before World War II, rivaled only by the February race at Daytona Beach. In 1941, Lloyd Seay won the race before his tragic death a day later after being shot by his cousin over a dispute on who bought sugar for the family moonshine business.
This incident plus the antics of his cousin Roy Hall during and after the war (illegal drag racing plus a bank robbery) led to the city banning drivers who had trouble with the law in the past due to moonshining. Due to this, NASCAR did not run a race there until the ban was lifted in 1951, as most of its most popular drivers were not allowed to compete. Imagine Charlotte dictating Dale Earnhardt Jr., Jimmie Johnson, Chase Elliott, and Carl Edwards could not compete due to something done by them outside of racing.
Fun fact, by the way: Sam Nunis and the AAA (yes, that AAA), who at the time was the biggest sanctioning body in racing in America (yes, that AAA), was originally going to promote a 500 mile race at Lakewood for Labor Day, 1950. Bill France, needing to find a way to put NASCAR on the map among all the other sanctioning bodies in the south at the time, put all his faith (and bank account) into a race at a new paved track in Darlington, South Carolina. A record purse for the event, big name drivers being locked out of Lakewood as well as wanting to get said purse, and the wonder of the first super speedway race on pavement for the stock cars led to so little fan interest that Nunis had to cancel the race. NASCAR became the premier racing body in the south due to the mammoth success of the first Southern 500 while the AAA focused more on promoting open wheel races up north.
Lakewood hosted 11 Cup races before being replaced on the schedule by what is now the Atlanta Motor Speedway. After losing its Cup dates, the track lost popularity and its terrible safety record wore out its welcome with the locals. It would close down shortly after the opening/closing scenes from “Smokey and The Bandit” were filmed there on location.